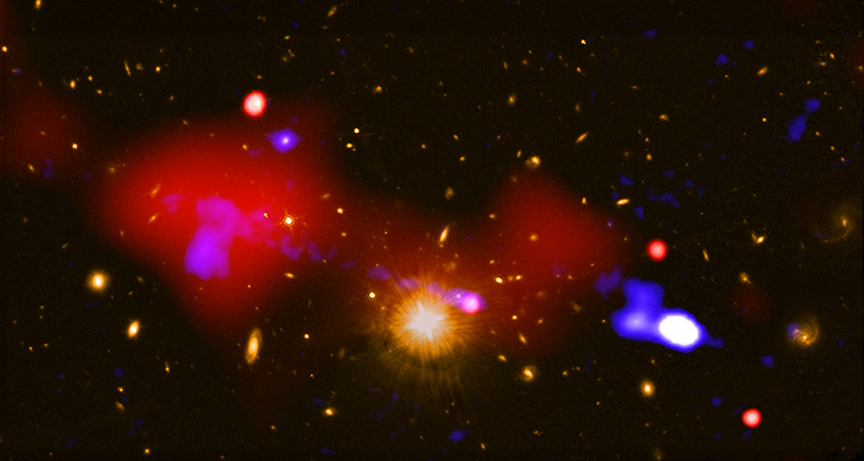 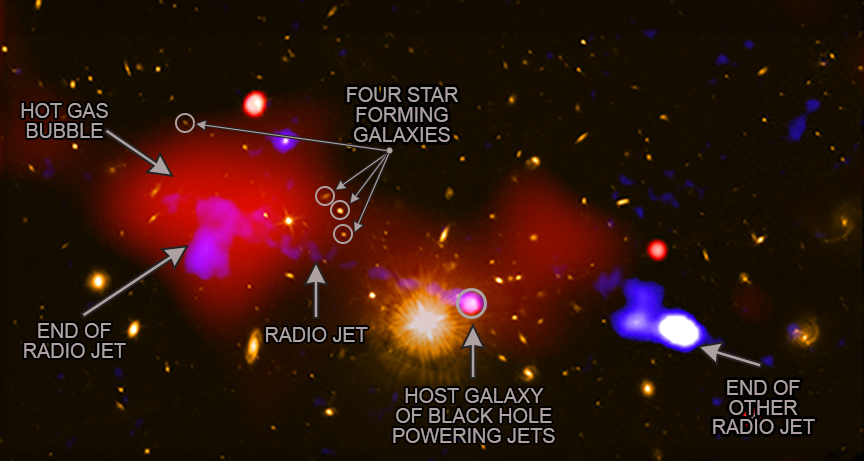 Positive Feedback Black Hole
X-ray: NASA/CXC/INAF/R. Gilli et al.; Radio NRAO/VLA; Optical: NASA/STScI
This image contains a black hole that is triggering star formation across the longest distance ever seen, as described in our latest press release. The black hole is located in the center of a galaxy — identified in a labeled image — about 9.9 billion light years from Earth. In this composite image, X-rays from NASA's Chandra X-ray Observatory (red) have been combined with radio emission detected by the NSF's Karl Jansky Very Large Array, or VLA, (blue), and an optical image from NASA's Hubble Space Telescope (yellow).

As hot gas swirls around the black hole, it emits large amounts of X-rays that Chandra detects. The black hole is also the source of radio-wave emission from a jet of high-energy particles — previously detected by scientists with the VLA — that stretches about a million light years. The jet is also identified in the labeled image. The end of the jet is highlighted by diffuse radio emission caused by the particles slowing down after interacting with surrounding matter. A bright source of radio emission (blue and white) on the opposite side of the black hole marks the end of a second jet of particles. This jet is not visible in the radio image.

Researchers also found a diffuse cloud of X-ray emission surrounding the end of the jet on the left. This X-ray emission is most likely from a gigantic bubble of hot gas heated by the interaction of the jet's particles with surrounding matter. As the hot bubble expanded and swept through four neighboring galaxies it could have created a shock wave that compressed cool gas in the galaxies, causing stars to form. The authors estimate that the star formation rates are between about 100% and 400% higher than typical galaxies with similar masses and distance from Earth. ...


Discovery of a Galaxy Overdensity around a Powerful, Heavily Obscured FRII Radio
Galaxy at z=1.7: Star Formation Promoted by Large-Scale AGN Feedback? ~ R. Gilli et al
Know the quiet place within your heart and touch the rainbow of possibility; be
alive to the gentle breeze of communication, and please stop being such a jerk. — Garrison Keillor
Top
1 post • Page 1 of 1