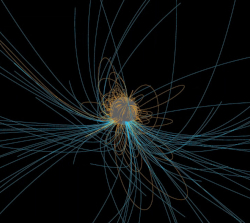 
Neutron stars are tiny objects with extremely high densities created when a star at least eight times more massive then the sun dies. The dying star first collapses, and the region near the very center of the star gets crushed by the enormous weight of the rest of the star. The central region of the star is squeezed so much that all the protons and electrons in the atoms are forced together to form neutrons, so that this dense, compact region is called a neutron star. A neutron star is therefore fundamentally an enormous atomic nucleus in space, one that's about a million trillion times larger than an ordinary atomic nucleus. These bizarre objects offer scientists the means to study the peculiar way that matter behaves at extreme densities, revealing physical secrets impossible to obtain in a terrestrial laboratory. Hot regions near the magnetic poles of the neutron star generate pulses of X-ray radiation as the neutron star spins, so X-ray emission is a good way to study neutron stars. Because neutron stars are so dense, they warp spacetime around them. The curved spacetime near a neutron star changes the way the pulses of X-rays from the magnetic poles vary with time. By carefully studying the time variation of a neutron star's X-ray pulses, astronomers can in principle determine how much the spacetime around the neutron star is bent, and thus measure the neutron star's density. The Neutron Star Interior Composition Explorer (or NICER for short) is an X-ray observatory on the International Space Station whose main goal is to precisely study the X-ray variations from rotating neutron stars, and to use these variations to measure the star's density. And now, for the first time, NICER has successfully measured the density of a neutron star called J0030+0451. Through very careful analysis of the X-ray variations from this neutron star, the NICER data show that J0030+0451 is 40 percent more massive than the Sun, but only about 15 miles wide. This means that J0030+0451 has a density about 100 trillion times the density of water, so that one teaspoon of J0030+0451 material would contain as much mass as the combined mass of all 8 billion people on earth. The NICER observations have also overturned the simple picture scientists have had of the shape of the neutron star's magnetic field. For decades, scientists assumed that neutron stars had simple dipolar magnetic fields, similar to the shape of the earth's magnetic field, with a one north pole and one south pole in opposite hemispheres. NICER shows that the shape of the magnetic field of J0030+0451 is much more complicated, with at least two poles in the same hemisphere. A visualization of what the complicated magnetic morphology of J0030+0451 might look like is shown above. Start re-writing those textbooks!

Click to play embedded YouTube video.
NICER Reveals 1st-ever Pulsar Surface Map ~ Credit: NASA/GSFC
Astrophysicists are redrawing the textbook image of pulsars, the dense, whirling remains of exploded stars, thanks to NASA’s Neutron star Interior Composition Explorer (NICER), an X-ray telescope aboard the International Space Station. Using NICER data, scientists have obtained the first precise and dependable measurements of both a pulsar’s size and its mass, as well as the first-ever map of hot spots on its surface.

The pulsar in question, J0030+0451 (J0030 for short), lies in an isolated region of space 1,100 light-years away in the constellation Pisces. While measuring the pulsar's heft and proportions, NICER revealed that the shapes and locations of million-degree “hot spots” on the pulsar’s surface are much stranger than generally thought.

“From its perch on the space station, NICER is revolutionizing our understanding of pulsars,” said Paul Hertz, astrophysics division director at NASA Headquarters in Washington. “Pulsars were discovered more than 50 years ago as beacons of stars that have collapsed into dense cores, behaving unlike anything we see on Earth. With NICER we can probe the nature of these dense remnants in ways that seemed impossible until now.” ...


ApJL Focus on NICER Constraints on the Dense Matter Equation of State
ApJL Focus on Early Results from NICER
Know the quiet place within your heart and touch the rainbow of possibility; be
alive to the gentle breeze of communication, and please stop being such a jerk. — Garrison Keillor
Top
2 posts • Page 1 of 1