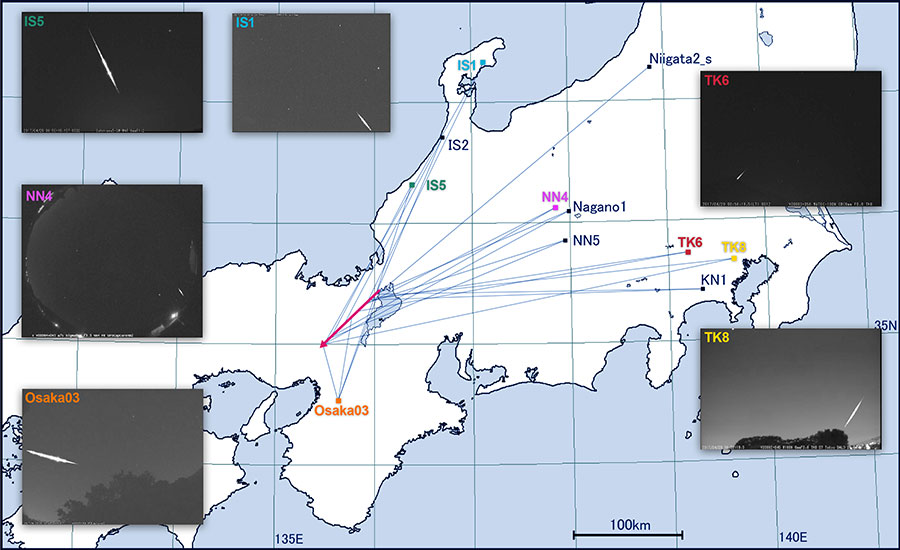 Images capturing the 2017 fireball from different angles and a map showing where the cameras were located. (Credit: NAOJ/Kasuga et al. AJ 2020)

At around 1 a.m. local standard time on April 29, 2017, a fireball flew over Kyoto, Japan. Compared to other fireballs spotted from Earth, it was relatively bright and slow. Now, scientists have determined not only what the fireball was, but also where it came from.

“We uncovered the fireball’s true identity,” says Toshihiro Kasuga, paper author and visiting scientist at the National Astronomical Observatory of Japan and Kyoto Sangyo University. “It has a similar orbit to that of the near-Earth asteroid 2003 YT1, which is likely its parent body.”

2003 YT1, a binary asteroid first detected in 2003, appears to have been active in the past, meaning it fissured and released dust particles, such as the one responsible for the 2017 fireball. It does not currently show any activity, though, according to Kasuga. However, the researchers found that the orbit, estimated radiant point, velocity and appearance date of the 2017 fireball are all consistent with dust particles that originated from 2003 YT1. ...


A Fireball and Potentially Hazardous Binary Near-Earth Asteroid (164121) 2003 YT1 ~ Toshihiro Kasuga et al
Know the quiet place within your heart and touch the rainbow of possibility; be
alive to the gentle breeze of communication, and please stop being such a jerk. — Garrison Keillor
Top
1 post • Page 1 of 1