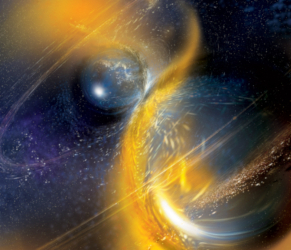 
Binary systems that contain two massive stars age in interesting ways. As time goes by, the more massive of the two will run through its nuclear fuel first, expanding and perhaps dumping parts of its mass on its companion (and possibly even making the original, less massive star the more massive one). One star will eventually run out of nuclear fuel and explode as a supernova. This explosion can be powerful enough to rip the binary apart, sending the two stars flying into space. In some cases, the binary system can remain bound even after two supernova explosions; in this case, the compact remnants of the two original companions, either neutron stars or black holes (or some combination) orbit each other like two zombies obeying the ultimate laws of Einstein's gravity. But even at this stage things get strange, since, as Einstein notes, compact objects in orbit emit gravitational radiation, which causes spacetime itself to ripple. The loss of gravitational energy from the system causes the two zombie stars to spiral together, until, in one extremely violent interaction, the two merge together, likely to form a new black hole in the Universe. The image above shows an illustration of a neutron star binary system just before the two stars merge. Using gravitational wave telescopes like LIGO, we have now witnessed this process happen dozens of times. A particularly important merger was detected on August 17, 2017, when LIGO saw the gravitational waves from the merger of two neutron stars and, at the same time, extreme radiation was seen by the Fermi Gamma-ray Space Telescope and by the INTEGRAL gamma-ray space observatory. The merger of neutron stars is actually vital to the existence of life in the Universe, cooking up biologically important trace elements (like molybdenum) and precious metals like gold. On April 17, 2019, LIGO again saw spacetime waver due to the merger of two compact objects. This event was produced by the merger of two relatively low-mass objects, with a total mass about 3.4 times the mass of the Sun. This means that each component had a mass in the neutron star range, about 1-2 times the mass of the Sun. However, no gamma-ray radiation was reported for this event. This may mean that the system did not emit detectable gamma rays, or perhaps this event was produced by the merger of two small black holes. If so, these would be the smallest black holes yet discovered.

During World War I, demand for molybdenum spiked; it was used both in armor plating and as a substitute for tungsten in high speed steels. Some British tanks were protected by 75 mm (3 in) manganese steel plating, but this proved to be ineffective. The manganese steel plates were replaced with much lighter 25 mm molybdenum steel plates allowing for higher speed, greater maneuverability, and better protection. The Germans also used molybdenum-doped steel for heavy artillery, like in the 42 cm/42 metric tons Minenwerfer-Gerät (M-Gerät), popularly known by the nickname Big Bertha, because traditional steel melts at the temperatures produced by the propellant of the one ton shell.>>