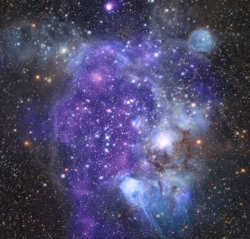 
Stars are born within large, massive, dense clouds of gas and dust. Massive stars start out as tiny regions in the cloud which, for some random reason, have slightly higher density than their surroundings. These density enhancements get amplified by self-gravity, growing denser and denser, and hotter and hotter. If conditions are right, eventually enough mass comes together to ignite the nuclear fires at the core of the baby star. There are complications to this simple picture (due magnetic fields, cloud spin, composition and other factors), so the exact process is hard to predict. And the details of star formation are frustratingly obscured from the gaze of curious astronomers by the thick curtain of dust and gas in the cloud itself. But, when they're old enough, stars themselves can pull this curtain aside and make themselves known. Stars do this by creating large, transparent cavities in their natal clouds through the combined actions of strong, powerful stellar winds and supernova explosions. These "superbubbles" produced by this violent action give a revealing peak at the baby stars in the stellar nursery. A beautiful example of such a giant stellar blowout is shown above. This image shows the N44 nebula in the Large Magellanic Cloud (a satellite galaxy of the Milky Way), and is a composite optical image from the Hubble Space Telescope and an X-ray image from the Chandra X-ray Observatory. The Hubble image shows in detail the visible wispy structures of glowing gas around the superbubble, along with dark dusty clouds threading the nebula. The X-ray image from Chandra, in purple above, shows that the cavity is not empty, but contains extremely hot, X-ray emitting gas. This hot gas is produced by the violent collisions between the fast-moving stellar winds and supernovae ejecta and the gas and dust in the nebula. The X-rays that this gas emits helps astronomers trace the entire history of the powerful stellar events that blew out the superbubble and shaped the nebula.