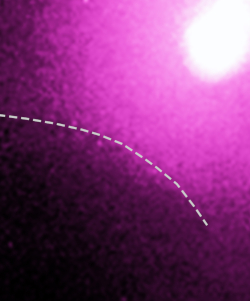 
Supermassive black holes that lurk at the centers of galaxies can be extremely messy eaters. Some eat so much that, for a while, they gobble everything in sight. Such cosmically bad table manners can have cosmically bad effects. If a black hole tries to swallow more than it can handle, a sudden bout of "black hole nausea" can ensue, leading to a gigantic spew of material that blasts through its host galaxy into space. Astronomers believe they have now found the most extreme example of such a black hole outburst. The image above shows an X-ray and radio image of a massive cluster of galaxies in the constellation of Ophiuchus, the serpent-bearer. This image is a false-color composite in which X-ray emission is shown in purple, and radio emission is shown in blue (with an infrared image of the galaxies and stars in the field shown in white). The observed X-ray emission is produced by hot gas held bound to the cluster by the enormous combined gravity of all the cluster galaxies. The amount of matter in this hot, intra-cluster gas is itself huge, dwarfing the combined amount of observable matter of the galaxies themselves. Sharp-eyed astronomers noted that a high-definition X-ray image of this hot gas taken by the Chandra X-ray Observatory had a peculiar, concave edge to it (shown by the dashed curve in the image), reminiscent of the edge of an enormous cavity, or bubble. Followup observations in X-rays by Chandra and by the XMM-Newton X-ray Observatory, and in the radio by India's Giant Metrewave Radio Telescope (GMRT) confirmed that this is indeed the case. Evidently, some ancient eruption from the black hole at the center of the galaxy (marked by the cross in the image above) blasted through the enormous amount of material in the X-ray emitting intracluster gas and created a giant bubble filled with cool, radio-emitting material. Astronomers were astonished by the energy required to create this bubble - it's equivalent to 10 billion supernova explosions. This is the most powerful explosion yet seen in the history of the Universe.