An international team of astronomers, led by UNIGE, has discovered a planet where it rains iron. 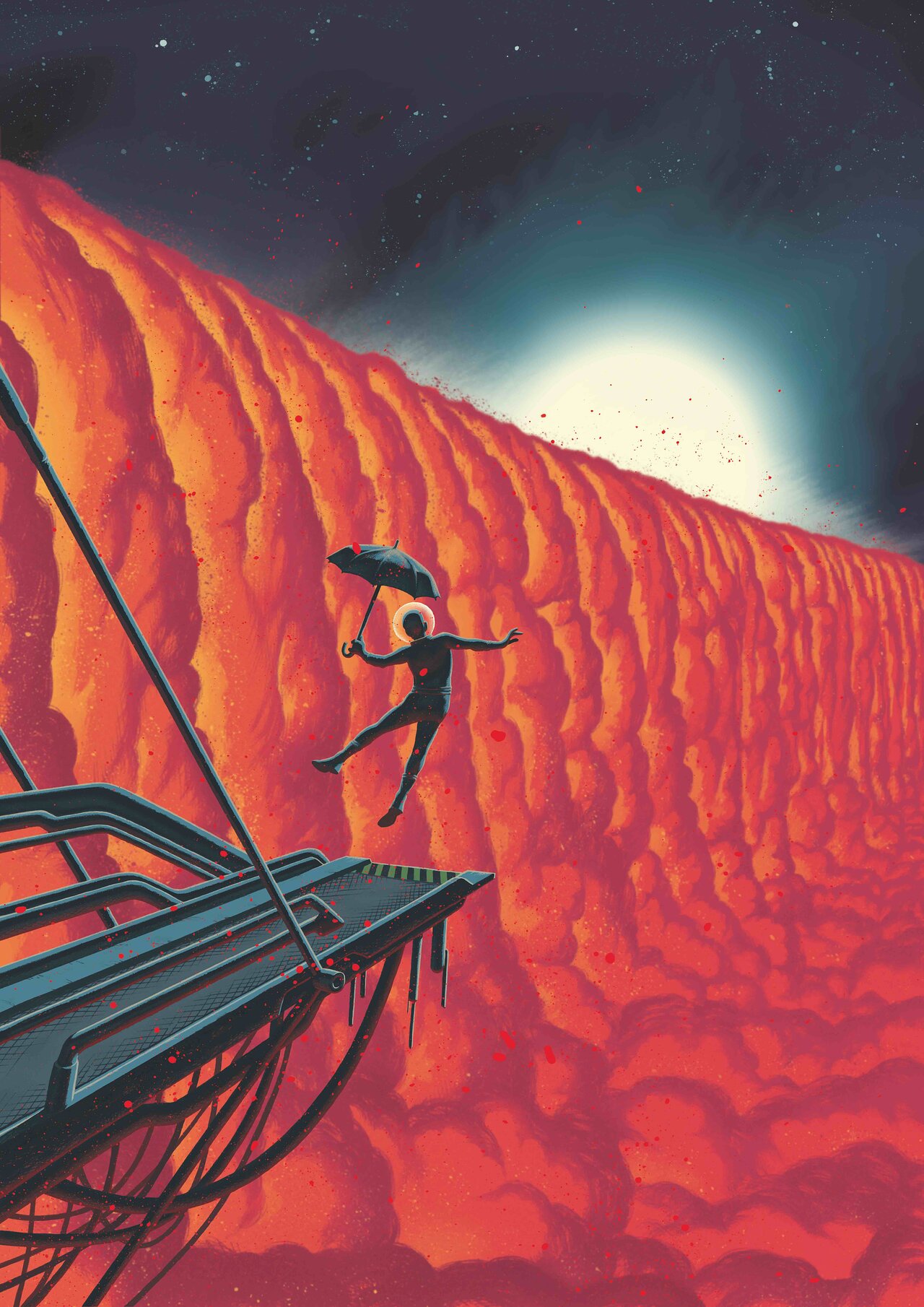 Singing in the Iron Rain: An Evening on WASP-76b ~ Work by the Geneva graphic novelist Frederik Peeters

Thanks to a new instrument conceived by the University of Geneva (UNIGE), Switzerland, and set at the Very Large Telescope (VLT) of the European Southern Observatory (ESO), an international team of researchers, led by UNIGE, has observed a planet featuring iron rains. This giant exoplanet has an ultra-hot day side with temperatures rising above 2,400°C, high enough to vaporise metals. Strong winds then carry the iron vapour to the 1,000-degree-cooler night side where it condenses into iron droplets. ...

WASP-76b is an exotic planet some 390 light years away in the constellation Pisces. “One could say this planet gets rainy in the evening, except that it rains iron”, says David Ehrenreich, a professor in the Department of Astronomy in the Faculty of Science at UNIGE and the first author of the study.

This strange phenomenon occurs because the planet constantly shows only one side, the day side, to its parent star, leaving its colder night side in perpetual darkness. Like the Moon in its orbit around the Earth, WASP-76b is “tidally-locked”: it takes the planet as long to rotate around its axis as it does to go around its star.

On the day side, WASP-76b receives thousands of times more radiation from its parent star than the Earth receives from the Sun, raising its temperature to over 2,400°C. It is so hot that molecules split into atoms and metals, such as iron, evaporate into the atmosphere. The extreme temperature difference between day and night then results in vigorous winds that carry iron vapour from the ultra-hot day side to the cooler night side, where temperatures drop to about 1,500°C.

Not only does WASP-76b have an extreme temperature difference between day and night, it also has a distinct day-night chemistry. Using the new ESPRESSO instrument on the ESO VLT in the Chilean Atacama Desert, astronomers have identified for the first time the chemical variations on an ultra-hot gas giant planet. They detected a strong iron vapour signature at the evening frontier, where the planet moves from its day to its night side. “Surprisingly, however, we don’t see iron vapour on the other side of the planet, in the morning, says Christophe Lovis, a researcher at UNIGE and lead-data analyst of ESPRESSO. The conclusion is that the iron has condensed during the night. In other words, it rains iron on the night side of this extreme exoplanet.” ...

Nightside Condensation of Iron in an Ultrahot Giant Exoplanet ~ David Ehrenreich et al
Last edited by bystander on Sun Mar 15, 2020 4:28 pm, edited 1 time in total.
Reason: added arXiv link
Know the quiet place within your heart and touch the rainbow of possibility; be
alive to the gentle breeze of communication, and please stop being such a jerk. — Garrison Keillor
Top

Re: UNIGE: Iron Rain on a Giant Exoplanet