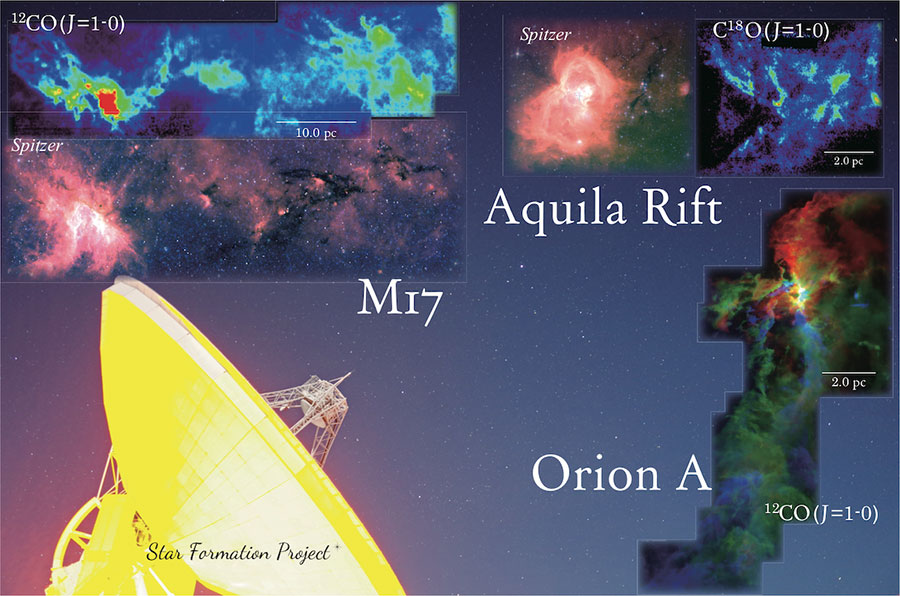 Montage of the CO molecule radio emission-line intensities in the three regions observed by the Star Formation Project and the Nobeyama 45-m Radio Telescope. (Credit: NAOJ)

Astronomers have captured new, detailed maps of three nearby interstellar gas clouds containing regions of ongoing high-mass star formation. The results of this survey, called the Star Formation Project, will help improve our understanding of the star formation process.

We know that stars such as the Sun are born from interstellar gas clouds. These interstellar gas clouds are difficult to observe in visible light, but emit strong radio wavelength, which can be observed by the Nobeyama 45-m Radio Telescope in Japan. A research team led by Fumitaka Nakamura ... used the telescope to create detailed radio maps of interstellar gas clouds, the birthplaces of stars. The team ... will use the observational data to investigate the star formation process.

The team targeted three interstellar clouds: the Orion A, Aquila Rift, and M17 regions. For the Orion A region, the group collaborated with the CARMA interferometer in the United States, combining their data to create the most detailed map ever of the region. The resultant map has a spatial resolution of about 3200 astronomical units. This means that the map can reveal details as small as 60 times the size of the Solar System. ...


Nobeyama 45 m Mapping Observations Toward the Nearby Molecular Clouds
Orion A, Aquila Rift, and M17: Project Overview ~ Fumitaka Nakamura et al
Special Issue: Nobeyama 45 m Telescope: Legacy Projects and Receiver FOREST
Publications of the Astronomical Society of Japan | Volume 71, Supplement 1, Dec 2019
Know the quiet place within your heart and touch the rainbow of possibility; be
alive to the gentle breeze of communication, and please stop being such a jerk. — Garrison Keillor
Top
1 post • Page 1 of 1