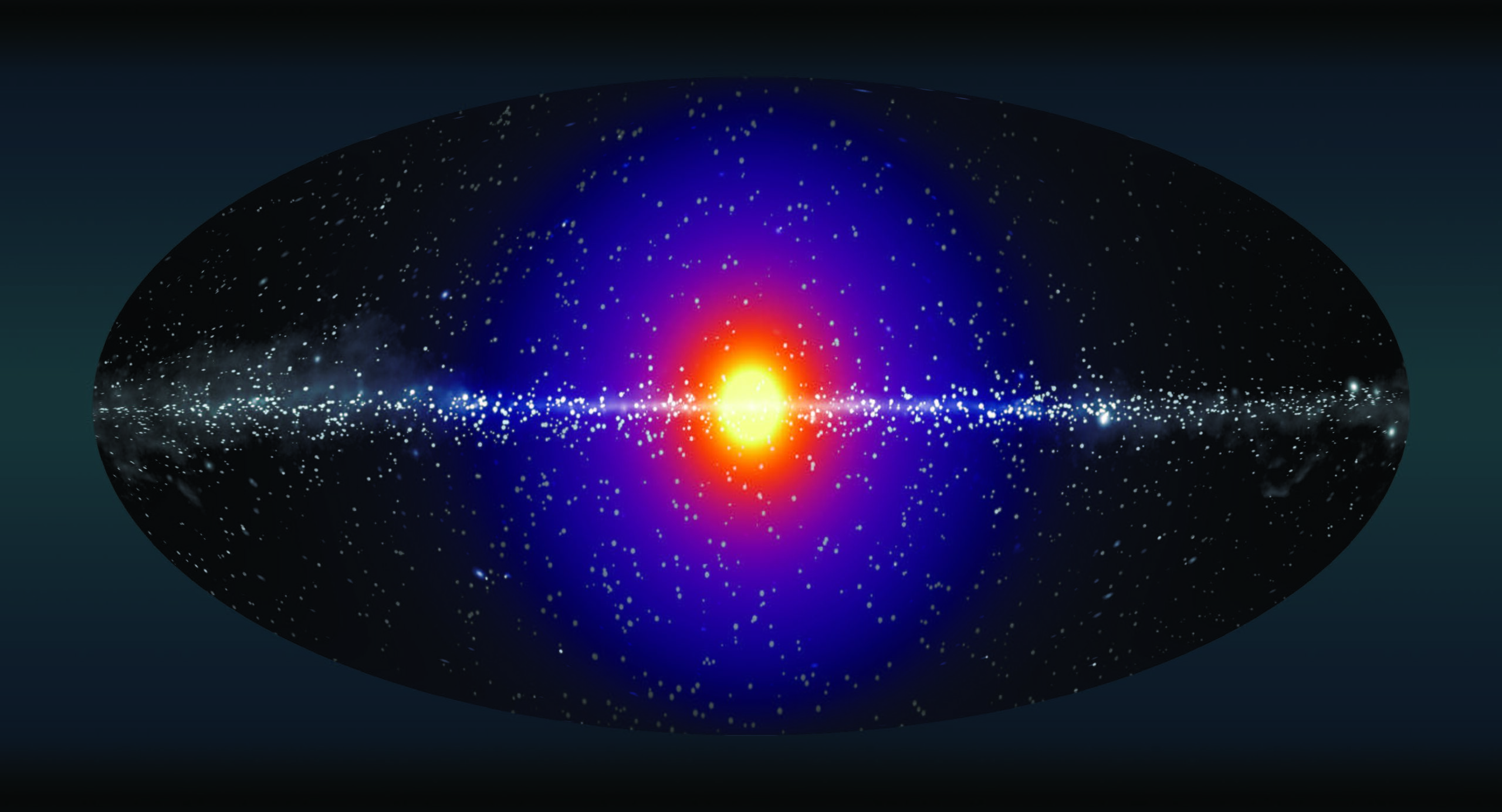 In this composite image, theorized particles of decaying dark matter should produce a spherical halo of X-ray emission – represented here as colorized matter concentrated around the center of the Milky Way (in black and white) – that could be detectable when looking in otherwise blank regions of the galaxy. (Credit: Zosia Rostomian and Nicholas Rodd/Berkeley Lab; Christopher Dessert and Benjamin Safdi/Univ of Michigan; Fermi LAT

Eighty-five percent of (matter in) the universe is composed of dark matter, but we don’t know what, exactly, it is.

A new study from the University of Michigan, Lawrence Berkeley National Laboratory (Berkeley Lab) and University of California, Berkeley has ruled out dark matter being responsible for mysterious electromagnetic signals previously observed from nearby galaxies. Prior to this work there were high hopes that these signals would give physicists hard evidence to help identify dark matter.

Dark matter can’t be observed directly because it does not absorb, reflect or emit light, but researchers know it exists because of the effect it has on other matter. We need dark matter to explain gravitational forces that hold galaxies together, for example.

Physicists have suggested dark matter is a closely related cousin of the neutrino, called the sterile neutrino. Neutrinos—subatomic particles with no charge and which rarely interact with matter—are released during nuclear reactions taking place inside the sun. They have a tiny amount of mass, but this mass isn’t explained by the Standard Model of Particle Physics. Physicists suggest that the sterile neutrino, a hypothetical particle, could account for this mass and also be dark matter. ...

The Dark Matter Interpretation of the 3.5-keV Line Is Inconsistent with
Blank-Sky Observations ~ Christopher Dessert, Nicholas L. Rodd, Benjamin R. Safdi
Know the quiet place within your heart and touch the rainbow of possibility; be
alive to the gentle breeze of communication, and please stop being such a jerk. — Garrison Keillor
Top

Re: UMich: Researchers Look for Dark Matter Close to Home

https://en.wikipedia.org/wiki/Sterile_neutrino wrote:
Click to play embedded YouTube video.
<<Sterile neutrinos (or inert neutrinos) are hypothetical particles (neutral leptons – neutrinos) that are believed to interact only via gravity and do not interact via any of the fundamental interactions of the Standard Model. The term sterile neutrino is used to distinguish them from the known active neutrinos in the Standard Model, which carry an isospin charge of ±1/2 under the weak interaction. It typically refers to neutrinos with right-handed chirality, which may be added to the Standard Model. Particles that possess the quantum numbers of sterile neutrinos and masses great enough such that they do not interfere with the current theory of Big Bang Nucleosynthesis are often called neutral heavy leptons (NHLs) or heavy neutral leptons (HNLs).

The existence of right-handed neutrinos is theoretically well-motivated because all other known fermions have been observed with both left and right chirality. They could also explain in a natural way the small active neutrino masses inferred from neutrino oscillation. The mass of the right-handed neutrinos themselves is unknown and could have any value between 1015 GeV and less than 1 eV. To comply with theories of leptogenesis and dark matter, there must be at least 3 types of sterile neutrinos (if they exist). This is in contrast to the number of active neutrino types required to ensure the electroweak interaction is free of anomalies, which must be exactly 3: The number of charged leptons and quark generations.

Due to the lack of electric charge, hypercharge, and color charge, sterile neutrinos would not interact electromagnetically, weakly, or strongly, making them extremely difficult to detect. They have Yukawa interactions with ordinary leptons and Higgs bosons, which via the Higgs mechanism leads to mixing with ordinary neutrinos. In experiments involving energies larger than their mass, sterile neutrinos would participate in all processes in which ordinary neutrinos take part, but with a quantum mechanical probability that is suppressed by a small mixing angle. That makes it possible to produce them in experiments, if they are light enough to be within the reach of current particle accelerators.

They would also interact gravitationally due to their mass, and if they are heavy enough, could explain cold dark matter or warm dark matter. In some grand unification theories they also interact via gauge interactions which are extremely suppressed at ordinary energies because their gauge boson is extremely massive. For a particle to be considered a dark matter candidate, it must have non-zero mass and no electromagnetic charge. Naturally, neutrinos and neutrino-like particles are a source of interest in the search for dark matter due to the possession of these two properties. It is more common today that theories rely on cold dark matter models (dark matter in the early universe is non-relativistic) as opposed to hot dark matter models (dark matter in the early universe is relativistic).

The search for sterile neutrinos is an active area of particle physics. If they exist and their mass is smaller than the energies of particles in the experiment, they can be produced in the laboratory, either by mixing between active and sterile neutrinos or in high energy particle collisions. If they are heavier, the only directly observable consequence of their existence would be the observed active neutrino masses. They may, however, be responsible for a number of unexplained phenomena in physical cosmology and astrophysics, including dark matter, baryogenesis or hypothetical dark radiation.>>