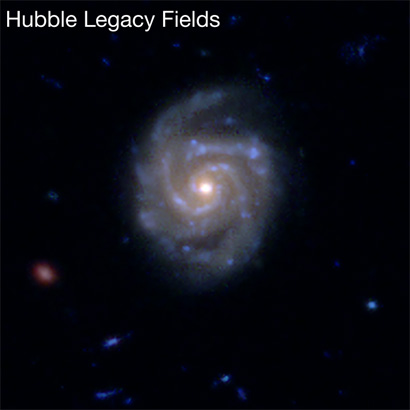 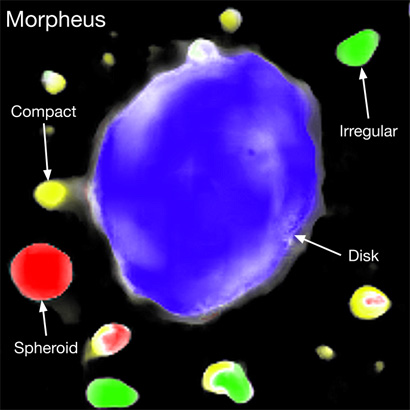 A Hubble Space Telescope image of a region in the Hubble Legacy Fields includes a
large disk galaxy. The overlay shows the Morpheus morphological classification
results for the same region. (Credits: NASA/STScI and Ryan Hausen)
Researchers at UC Santa Cruz have developed a powerful new computer program called Morpheus that can analyze astronomical image data pixel by pixel to identify and classify all of the galaxies and stars in large data sets from astronomy surveys.

Morpheus is a deep-learning framework that incorporates a variety of artificial intelligence technologies developed for applications such as image and speech recognition. Brant Robertson ... said the rapidly increasing size of astronomy data sets has made it essential to automate some of the tasks traditionally done by astronomers.

“There are some things we simply cannot do as humans, so we have to find ways to use computers to deal with the huge amount of data that will be coming in over the next few years from large astronomical survey projects,” he said.

The morphologies of galaxies, from rotating disk galaxies like our own Milky Way to amorphous elliptical and spheroidal galaxies, can tell astronomers about how galaxies form and evolve over time. Large-scale surveys ... will generate huge amounts of image data, and Robertson has been involved in planning how to use that data to understand the formation and evolution of galaxies. ...

Other astronomers have used deep-learning technology to classify galaxies, but previous efforts have typically involved adapting existing image recognition algorithms, and researchers have fed the algorithms curated images of galaxies to be classified. Hausen built Morpheus from the ground up specifically for astronomical image data, and the model uses as input the original image data in the standard digital file format used by astronomers. ...


Morpheus: A Deep Learning Framework for the Pixel-level
Analysis of Astronomical Image Data ~ Ryan Hausen, Brant Robertson
Know the quiet place within your heart and touch the rainbow of possibility; be
alive to the gentle breeze of communication, and please stop being such a jerk. — Garrison Keillor
Top
1 post • Page 1 of 1