How star color can tell us if stars are related

How star color can tell us if stars are related

Since I'm so crazy about star colors, I'm going to show you a few colorful stellar groupings, discuss their colors and talk about what their colors can tell us when it comes to the question of whether these stars are physically related or not.

Stars that are on the main sequence fuse hydrogen to helium in their cores. Main sequence stars are brighter and bluer the more massive they are, and fainter and redder the more lightweight they are.

Very massive stars turn into supergiants. Supergiants come in all colors, from blue to red. Supergiants are typically more or less the same brightness, although there are certainly some that are "extra extremely bright".

The more massive a star is, the sooner it evolves off the main sequence and becomes a giant or a supergiant. 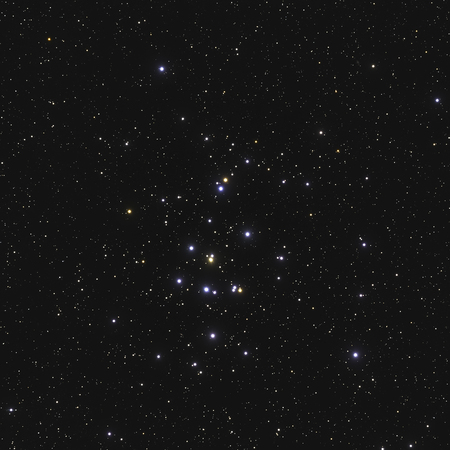 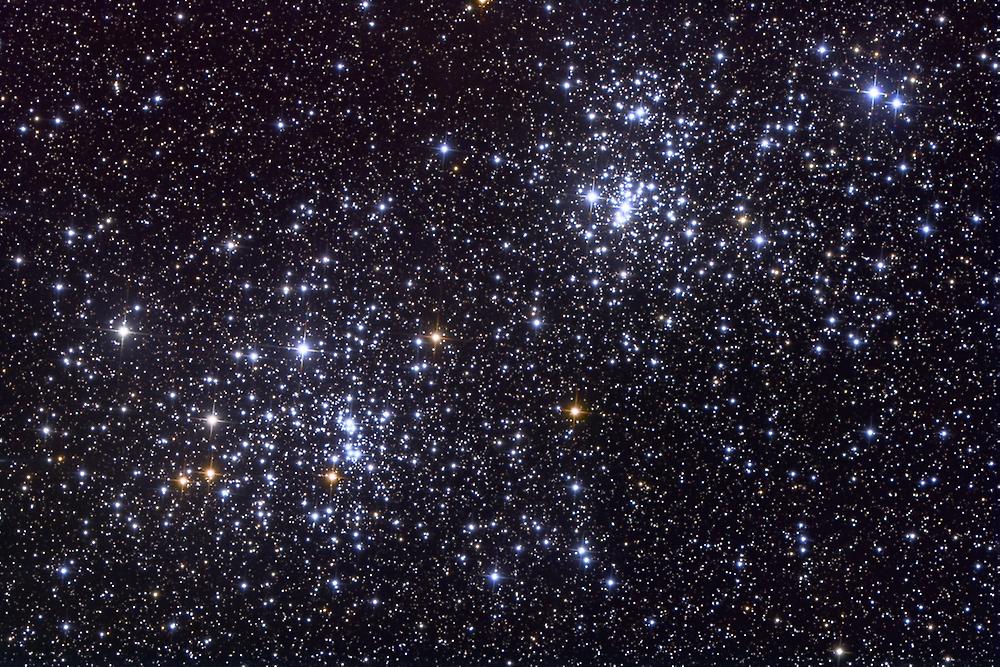 
Now let's look at two clusters or stellar groupings and try to use their colors to guess if they are related.


31 Cygni.png
31 Cygni (bright orange star and very blue star below it),
and 30 Cygni (blue-white star to the upper right).
Photo: Jerry Lodriguss.
30 and 31 Cygni make up a very interesting and colorful grouping. The bright orange star of 31 Cygni is a bright K-type giant, some 2,000 times brighter than the Sun in visual light. Its B-V index is +1.3, which is decently orange. So this is a bright and orange star, a cool bright giant.

The intensely blue star below the orange giant is a B-type star. Its B-V index is -0.13, which is really quite blue. This star is much fainter than the orange giant. It may or may not itself be an evolved star, but whether or not it is, it is still hot, and it is almost certainly less massive than the orange star. And we do expect the most massive stars to evolve into giants before the less massive stars. In short, the orange and the blue star make a "reasonable" pair.

Now look at 30 Cygni, the blue-white star to the upper right of the orange giant. It looks definitely less blue than the blue star closer to the orange star. And it really is less blue. Its B-V index is +0.10, a noticeable difference.

30 Cygni does not seem to belong to the two stars that make up 31 Cygni. It seems to be closer to us (although its Hipparcos parallax is very uncertain), and its proper motion is different. The spectral class of 30 Cygni is A5III, meaning it is an evolved giant. It is still moderately hot, or at least it is not yet a cool giant.

Now let's look at NGC 2017! It is a small group of stars, and its brightest member is noticeably bluer than the rest. It is a star of spectral class B4, with a B-V index of -0.09.

Most curiously, there is a very orange star to the left of the bright blue one that is fainter than the blue luminary. We don't expect that. The most massive stars turn into giants first, and then they get brighter, not fainter. What's going on?

How weird. In this small cluster, we may have three seeming cluster members that are at wildly different distances from us. If this is true, cluster NGC 2017 is not a cluster at all.

This picture by Donald Pelletier gives you a better idea of the relative apparent brightnesses of the stars in NGC 2017, although I think it does a worse job in bringing out the colors. Colors can tell you a lot about stars.

Ann
You do not have the required permissions to view the files attached to this post.
Color Commentator
Top
1 post • Page 1 of 1