JPL: A Cosmic Baby is Discovered, and It's Brilliant

JPL: A Cosmic Baby is Discovered, and It's Brilliant


Born from an exploded star, the infant magnetar belongs to a family of extreme objects called neutron stars. Its discovery may lend insight into these strange phenomena. 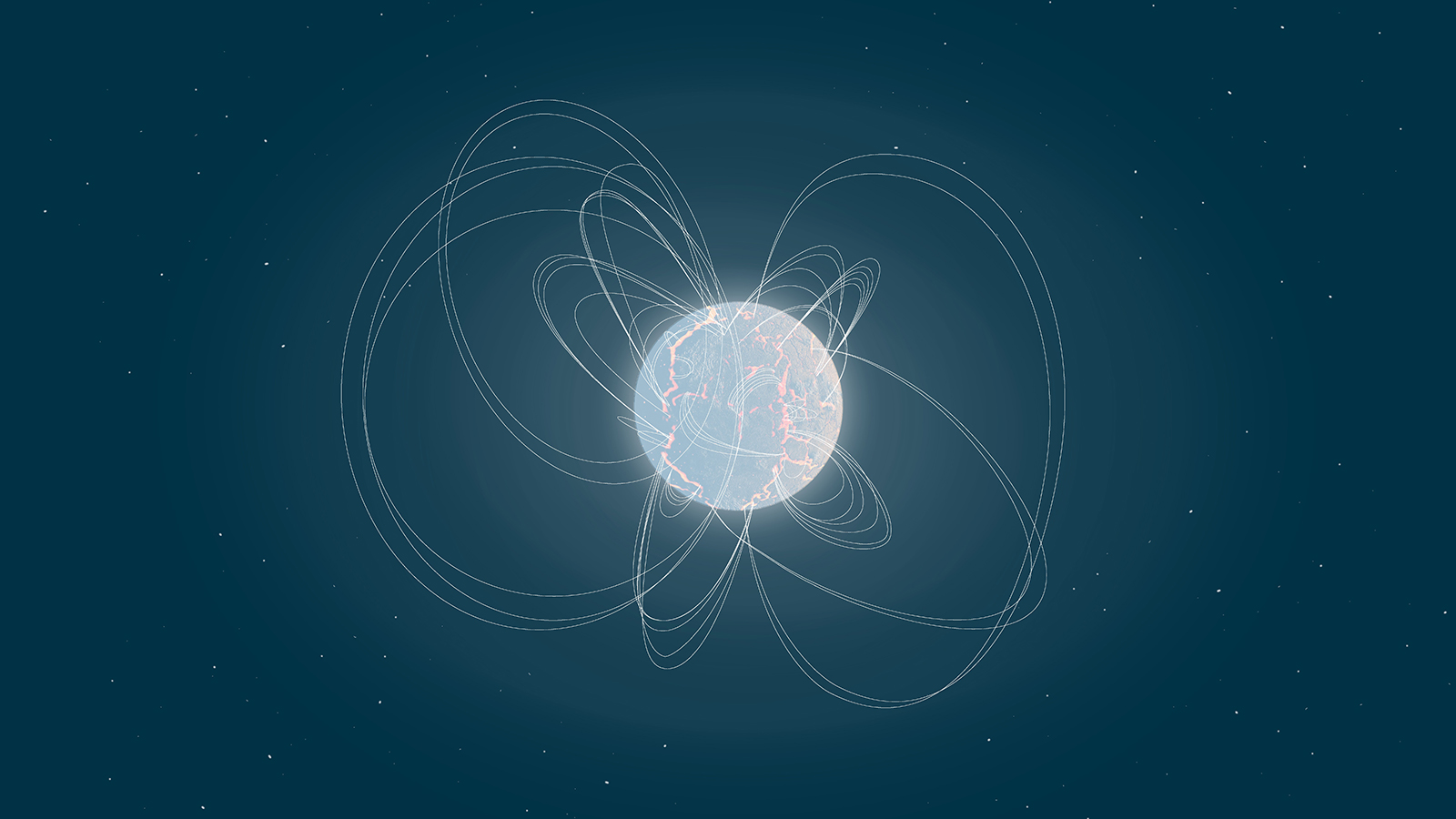 This illustration shows magnetic field lines protruding from a highly magnetic neutron star, or a dense nugget left over after a star goes supernova and explodes. Known as magnetars, these objects generate bright bursts of light that might be powered by their strong magnetic fields. Credits: ESA

Astronomers tend to have a slightly different sense of time than the rest of us. They regularly study events that happened millions or billions of years ago, and objects that have been around for just as long. That's partly why the recently discovered neutron star known as Swift J1818.0−1607 is remarkable: A new study ... estimates that it is only about 240 years old — a veritable newborn by cosmic standards.

NASA's Neil Gehrels Swift Observatory spotted the young object on March 12, when it released a massive burst of X-rays. Follow-up studies by the European Space Agency's XMM-Newton observatory and NASA's NuSTAR telescope ... revealed more of the neutron star's physical characteristics, including those used to estimate its age. ...

Swift J1818.0−1607 packs twice the mass of our Sun into a volume more than one trillion times smaller.

With a magnetic field up to 1,000 times stronger than a typical neutron star — and about 100 million times stronger than the most powerful magnets made by humans — Swift J1818.0−1607 belongs to a special class of objects called magnetars, which are the most magnetic objects in the universe. And it appears to be the youngest magnetar ever discovered. If its age is confirmed, that means light from the stellar explosion that formed it would have reached Earth around the time that George Washington became the first president of the United States. ...

A Very Young Radio-Loud Magnetar ~ P. Esposito et al
Know the quiet place within your heart and touch the rainbow of possibility; be
alive to the gentle breeze of communication, and please stop being such a jerk. — Garrison Keillor
Top

https://en.wikipedia.org/wiki/Magnetar wrote:
<<Magnetars are characterized by their extremely powerful magnetic fields of ∼109 to 1011 T. Earth has a geomagnetic field of 30–60 microteslas, and a neodymium-based, rare-earth magnet has a field of about 1.25 tesla, with a magnetic energy density of 4.0×105 J/m3. A magnetar's 1010 tesla field, by contrast, has an energy density of 4.0×1025 J/m3, with an E/c2 mass density more than 10,000 times that of lead. General relativity predicts significant spacetime bending effects due to these huge magnetic fields, but quantum considerations suggest otherwise. The magnetic field of a magnetar would be lethal even at a distance of 1000 km due to the strong magnetic field distorting the electron clouds of the subject's constituent atoms, rendering the chemistry of life impossible. At a distance of halfway from Earth to the moon, a magnetar could strip information from the magnetic stripes of all credit cards on Earth.

As described in the February 2003 Scientific American cover story, remarkable things happen within a magnetic field of magnetar strength. "X-ray photons readily split in two or merge. The vacuum itself is polarized, becoming strongly birefringent, like a calcite crystal. Atoms are deformed into long cylinders thinner than the quantum-relativistic de Broglie wavelength of an electron." In a field of about 105 teslas atomic orbitals deform into rod shapes. At 1010 teslas, a hydrogen atom becomes a spindle 200 times narrower than its normal diameter.

The dominant theory of the strong fields of magnetars is that it results from a magnetohydrodynamic dynamo process in the turbulent, extremely dense conducting fluid that exists before the neutron star settles into its equilibrium configuration. These fields then persist due to persistent currents in a proton-superconductor phase of matter that exists at an intermediate depth within the neutron star (where neutrons predominate by mass). But another theory is that they simply result from the collapse of stars with unusually high magnetic fields.>> 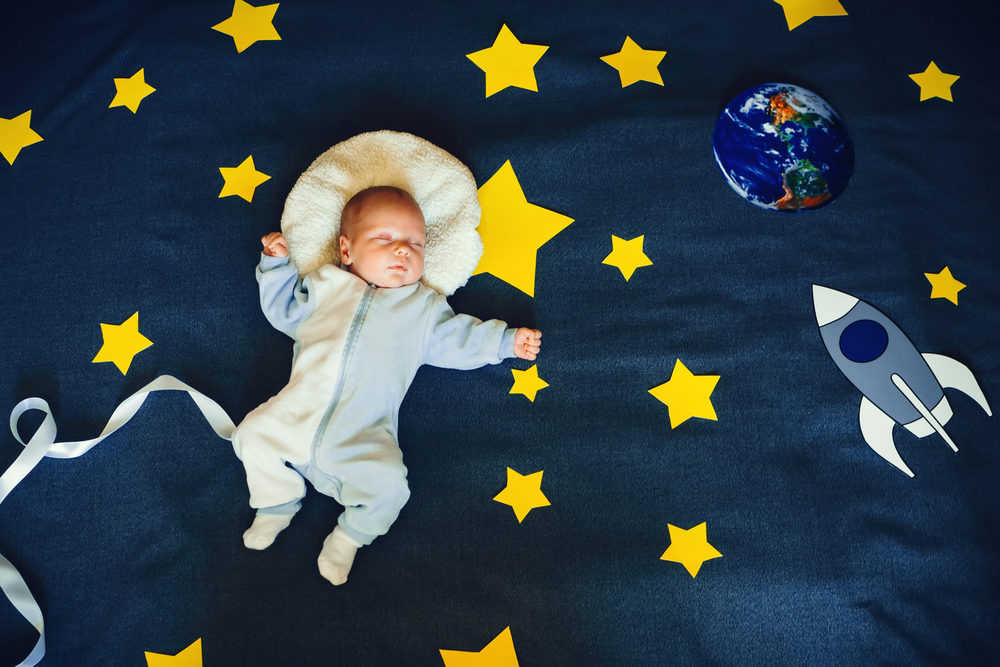 Although I strongly suspect that magnetar babies are not as cute as human babies.

Although I strongly suspect that magnetar babies are not as cute as human babies.

The magnetic field of a magnetar baby would be lethal even at a distance of 1000 km due to the strong magnetic field distorting the electron clouds of a paent's constituent atoms, rendering the chemistry of life impossible. At a distance of halfway from Earth to the moon, a magnetar could strip information from the magnetic stripes of all credit cards on Earth.
Art Neuendorffer
Top
4 posts • Page 1 of 1