Something different, that the comet is everywhere 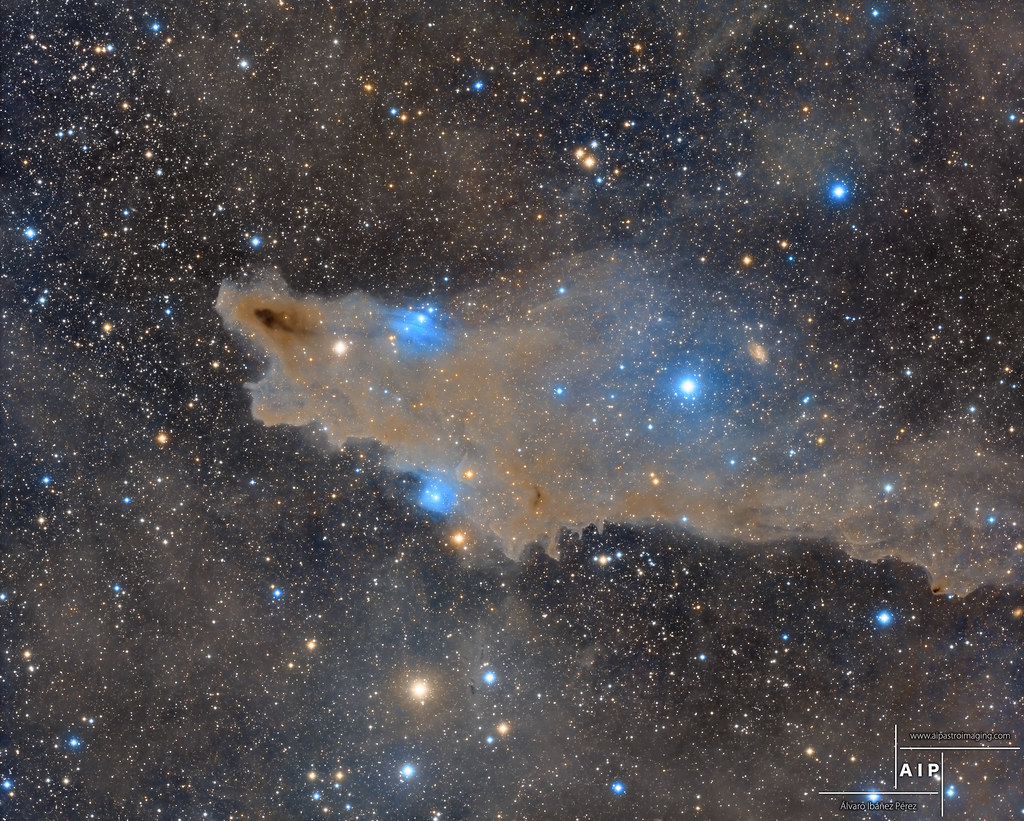 attached also two zooms of the most interesting areas

I can't insert an image 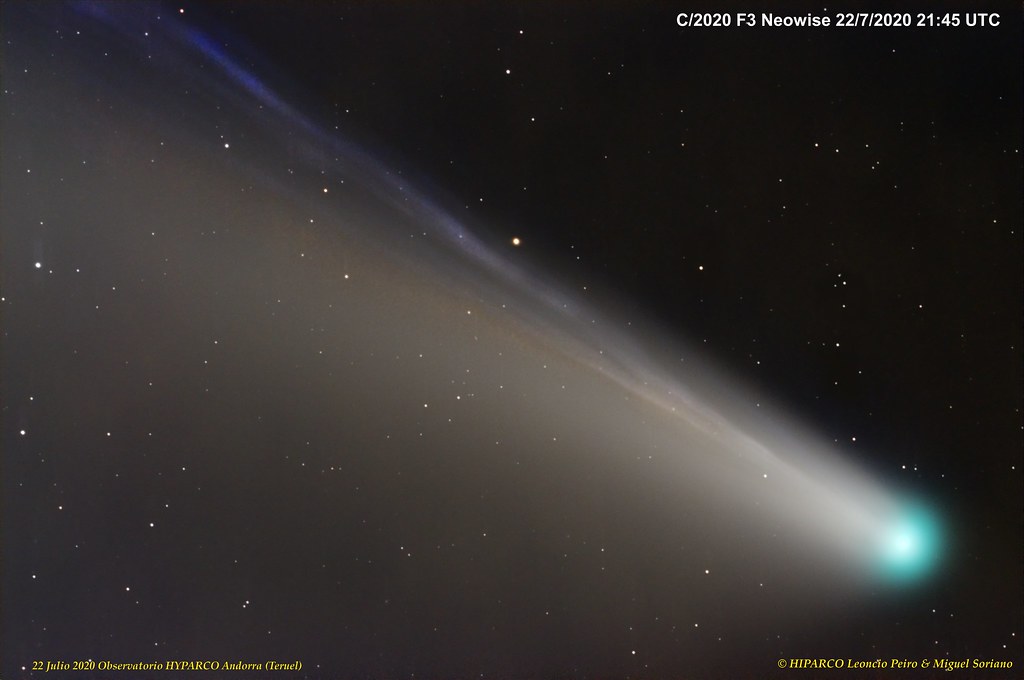 Comet NEOWISE over the Boston Lighthouse.

Exif - F2.8, 2.5 Seconds, ISO 6400.
Boston-Light-Insta.jpg
You do not have the required permissions to view the files attached to this post.
Top 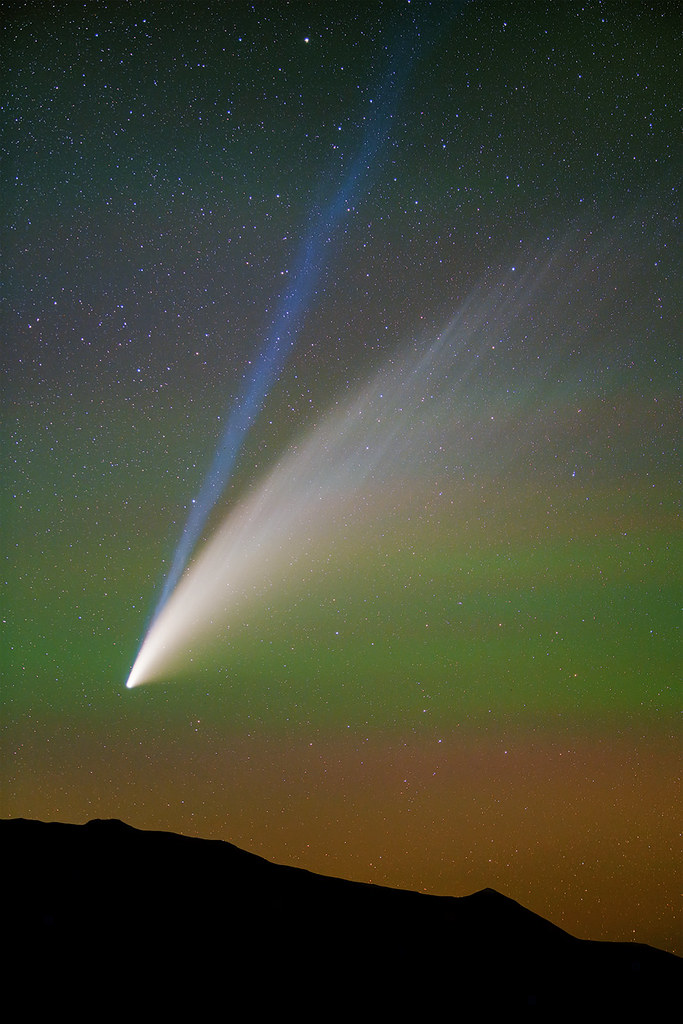 I captured this stack of 15 x 1 minute photos of Comet NEOWISE from Craters of the Moon National Monument. The skies were dark and filled with amazing green airglow! I used a Nikon D850 and 70-200mm lens with a Radian tripod and Skywatcher tracker to keep the stars pinpoint.
Top

At the center of the image are the different Maison and Plana craters, which are shown in close contact

Moon Halo captures Jupiter & Scorpius
Copyright: Steve Johnston
IMG_7643_Moon halo.JPG
A 22 degree halo around the Moon with Jupiter (lower right) and the majority of Scorpius (top) both inside the halo. Saturn is outside the halo near Jupiter. Taken form Melbourne, Victroria, Australia on 31 July 2020. Technical details: Canon 6D, Sigma 24mm @ f/5, ISO-400, 1 x 10s.
You do not have the required permissions to view the files attached to this post.
Top

The idea was to get H-Alpha parts with L-Enhance filter.

I'm really proud to get this with just an EQ3-2 mount without guiding !*

My contribution to the comet, unfortunately we got it very low, with a lot of atmospheric turbulence. 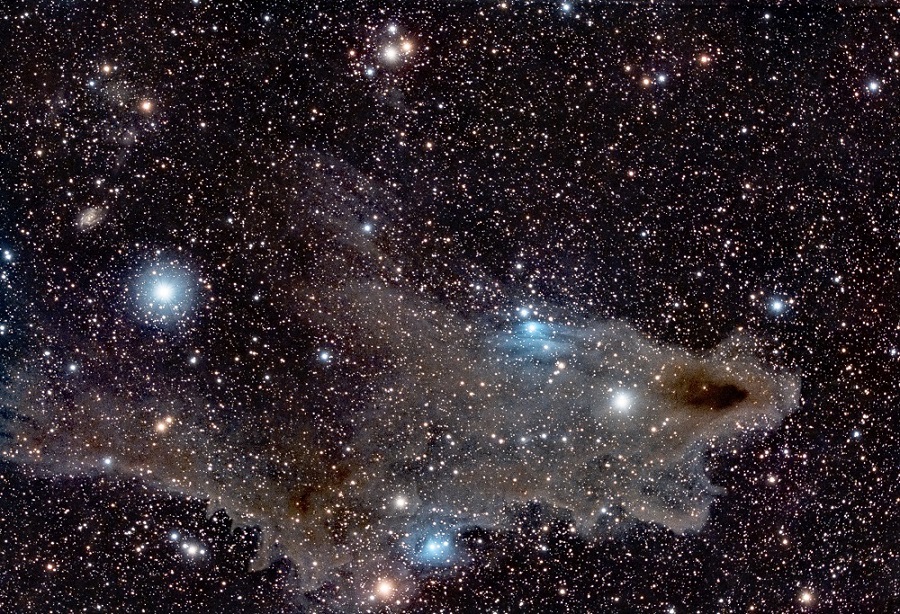 Better Resolution Version
Greetings all,
I would like to submit this recent integration. I love how the Cosmos mimics life on Earth at times, or does life mimic the Cosmos

Better Resolution Version
Greetings all,
I would like to submit this recent integration. I love how the Cosmos mimics life on Earth at times, or does life mimic the Cosmos

Welcome to Starship Asterisk*, Mark! That's a fine picture of this dark nebula!

Jupiter and Moon conjuntion on 1st August 2020.
In the image you can see Jupiter with 3 moons ( Europa , Ganimedes and Calisto from more close to more far away)
The cloud give a nice light to this view. 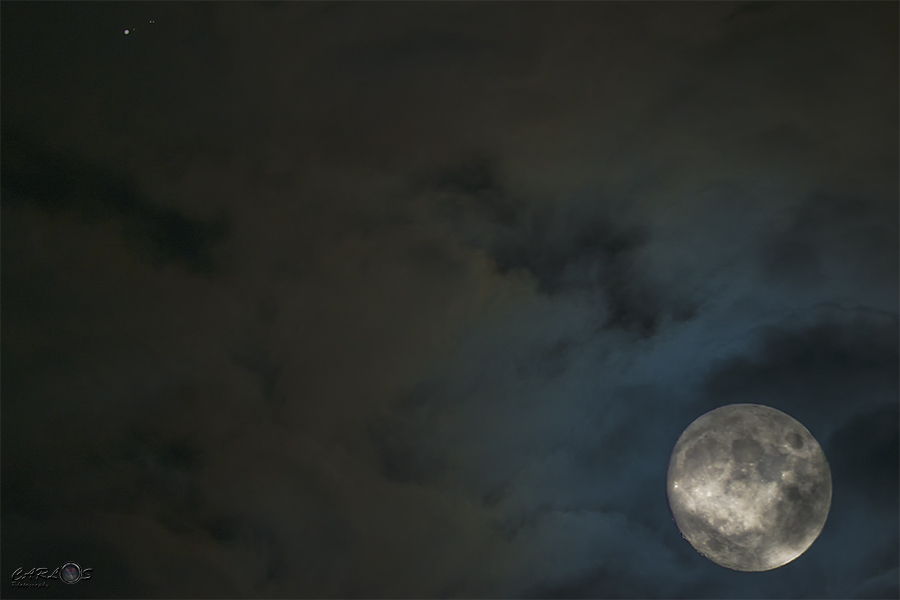 From my description on AstroBin: "I rarely see people taking narrowband data of comets, so I thought that was interesting. You can see both tails in the narrowband only image (B) are mostly green indicating hydrogen signal but the comet head is purple indicating a combination of sulphur and oxygen and the gases right behind are cyan indicating some combination of hydrogen and oxygen. The LRGB image (C) on the other hand shows the typical green halo of comets that's due to the presence of carbon. There's some internal structure to the body (i.e., the actual ball of rock and ice is clearly distinguishable). Finally the different sets of images combine to make one that is clearly brighter/better in my opinion even though I have a soft spot for the narrowband only image. That said, having processed my very first comet, I do wish I had spent more time capturing additional data."

--Ram
You do not have the required permissions to view the files attached to this post.
Top

This was taken from my backyard in Brisbane, AUS during the Lunar Eclipse in July 2018. I used a Nikon D7100 and attached it to a 10" Newtonian which was sitting atop of an NEQ6 Pro mount. I took a shot every 5 mins with varying exposures at the telescopes native f4.8.

4 of the images at the 7-9 o'clock position are composites of 2 images to bring about more detail.

I give public license to this image, do what you will with it. 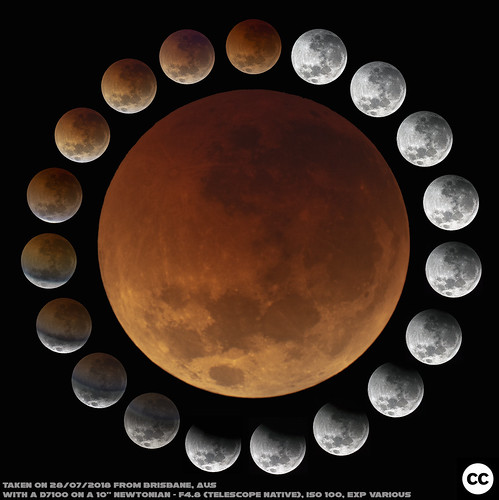 M16 Eagle nebula with pillars of creation and the fairy
This image is made with
- Celestron C11hd at 2800 mm focal length
- main imager zwo Asi6200mm pro
- guiding Zwo OAG and zwo asi290 mono
- filter astronomik 6nm SHO 30x300s each
for a total of 7,5H hours of integration time.
This picture was taken from Mougins, in the south-east of France

The image, taken during the night of August 1, 2020, shows the conjunction between an almost full Moon, surrounded by a beautiful corona, and the superbright Jupiter netx to the the temple section of the Mole Antonellian, a 167.5 high monument considered as the symbol of Turin, that houses the National Museum of Cinema and was the inspiration for the official emblem of the 2006 Winter Olympics.

The moon is usually seen in subtle shades of gray or yellow.
The different colors are recognized to correspond to actual differences in the chemical composition of the lunar surface. Blue hues reveal areas rich in ilmenite, which contains iron, titanium and oxygen, mainly titanium, while orange and purple show relatively poor titanium and iron regions.
White areas are taller areas that are most exposed to the sun.
Trips to the moon have already been indicated by similar images.
Made with saturation technique, moon in color.

5 Fisheye images were stitched together to create this pano.neowise-360-fb.jpg

Welcome to Starship Asterisk*. mmamtani! That's a very nice image showing the Big Dipper, too! And I have to wonder, is that Jupiter?


Thank you Ann. To my knowledge - Jupiter and Saturn near the milky way.
Top

The meeting: Orion, Scorpius and Rukapillan

Pano-Orion-Scorpius-Rukapillan-volcano.jpg
Story: It is well known that the constellations of Orion and Scorpion mark the beginning and end of the seasons in the year.
In fact, in Greek mythology it is said that the goddess Gea created a giant scorpion to chase the hunter Orion, and thus protect the animals and humans of the Earth , but that in a fatal encounter, where both were already dying, the gods decided to commemorate the Scorpion by putting him in the sky, and Orion not to leave him in oblivion but if by way of torture, the Scorpion would pursue him eternally, so then never we see both contelations together in the night sky.
Except in certain latitudes (Here is latitude 39°S) at certain times, with enough opening to the East and West, we can appreciate these 2 giants, and thus also have this panoramic view of 3 arms of the Milky Way: Orion, Carina and Sagittarius.
It was also a night of company with the most active volcano in Chile, the Rukapillan (Villarrica volcano) and this chemamull (sacred mapuche sculpture) at its feet.

Social:
http://www.instagram.com/cariletelier_foto
http://www.cariletelier.com
You do not have the required permissions to view the files attached to this post.
Top
244 posts