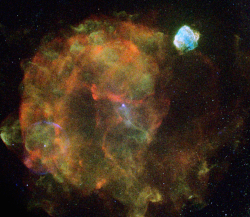 
As eROSITA maps the sky from its lonely outpost at L2, a million miles from earth, startling new views of the X-ray universe emerge. The image above shows a wonderful field of X-ray fireworks, a region of sky featuring not one but three separate supernova remnants, hot, glowing clouds of sparks left behind by the titanic explosions of stars. All three stars exploding in an instant, as the Galaxy measures time, like some grand finale of a cosmic fireworks display. The largest nebula in this image is the Vela Supernova Remnant, produced by the collapse and explosion of a massive star, about 10-20 times the mass of the Sun, which occurred about 12,000 years ago. It appears so large because it's so close to us, only about 800 light-years away. Its large angular size makes it difficult to obtain a complete high-resolution view of the remnant with other X-ray telescopes with smaller fields of view, but eROSITA maps the entire remnant in stunning clarity. The Vela supernova remnant appears to overlap two other supernova remnants, the Puppis A remnant to the upper right and the "Vela Junior" remant (discovered only 20 years ago) to the lower left. Vela Junior is believed to be about 600 lightyears distant, and light from the explosion is believed to have reached earth about 700 years ago (although there is no written record that the explosion was viewed by humans, there is evidence buried in the ice of Antarctica of chemical transformations produced when the high-energy radiation from Vela Junior hit the atmosphere of earth). All three supernova remnants also contain tiny, ultracompact, ultra-high-density neutron stars, which can be seen near the centers of the nebulae.