Detailed computer simulations have found that a cosmic contraction can generate features of the universe that we observe today. 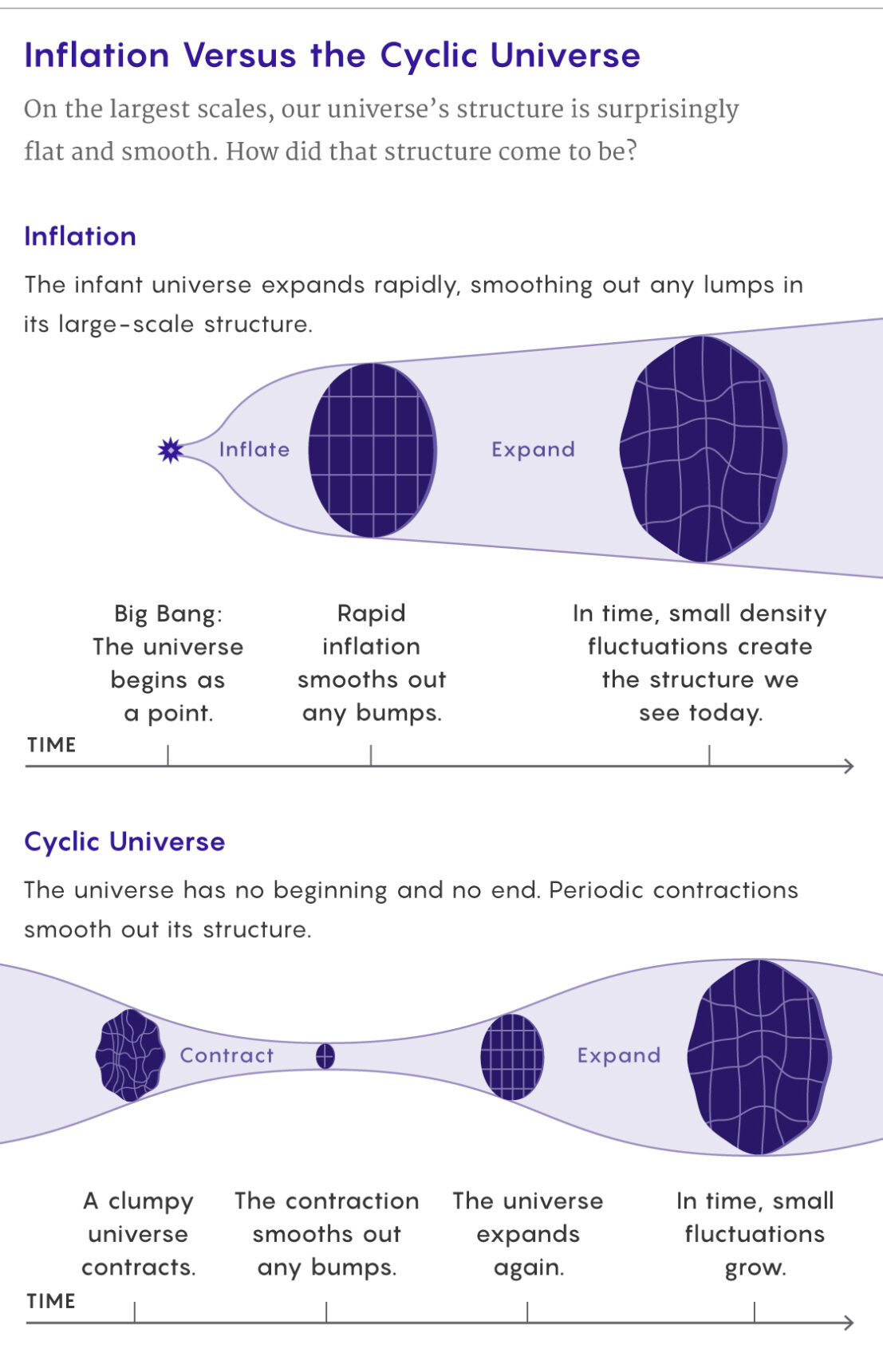 The standard story of the birth of the cosmos goes something like this: Nearly 14 billion years ago, a tremendous amount of energy materialized as if from nowhere.

In a brief moment of rapid expansion, that burst of energy inflated the cosmos like a balloon. The expansion straightened out any large-scale curvature, leading to a geometry that we now describe as flat. Matter also thoroughly mixed together, so that now the cosmos appears largely (though not perfectly) featureless. Here and there, clumps of particles have created galaxies and stars, but these are just minuscule specks on an otherwise unblemished cosmic canvas.

That theory, which textbooks call inflation, matches all observations to date and is preferred by most cosmologists. But it has conceptual implications that some find disturbing. In most regions of space-time, the rapid expansion would never stop. As a consequence, inflation can’t help but produce a multiverse — a technicolor existence with an infinite variety of pocket universes, one of which we call home. To critics, inflation predicts everything, which means it ultimately predicts nothing. “Inflation doesn’t work as it was intended to work,” said Paul Steinhardt, an architect of inflation who has become one of its most prominent critics.

In recent years, Steinhardt and others have been developing a different story of how our universe came to be. They have revived the idea of a cyclical universe: one that periodically grows and contracts. They hope to replicate the universe that we see — flat and smooth — without the baggage that comes with a bang.

To that end, Steinhardt and his collaborators recently teamed up with researchers who specialize in computational models of gravity. They analyzed how a collapsing universe would change its own structure, and they ultimately discovered that contraction can beat inflation at its own game. No matter how bizarre and twisted the universe looked before it contracted, the collapse would efficiently erase a wide range of primordial wrinkles. ...

Over the last year and a half, a fresh view of the cyclic, or “ekpyrotic,” universe has emerged from a collaboration between Steinhardt, Anna Ijjas, and others — one that achieves renewal without collapse.


A New Kind of Cyclic Universe ~ Anna Ijjas, Paul J. Steinhardt Supersmoothing through Slow Contraction ~ William G. Cook et al Robustness of Slow Contraction to Cosmic Initial Conditions ~ Anna Ijjas et al
Know the quiet place within your heart and touch the rainbow of possibility; be
alive to the gentle breeze of communication, and please stop being such a jerk. — Garrison Keillor
Top

I have no hope whatsoever of making an honest assessment of the probability of a Big Bounce Universe.

But I want to point out that a Big Bounce Universe is likely to be very popular among a lot of people. Only the idea that there are lots of intelligent aliens in our own galaxy, and the suggestion that it is going to be eminently feasible for human beings to travel extensively in space and visit other solar systems, are likely to be more popular than the idea of a bouncing Universe.

So while it is impossible for me to have any ideas of whether or not it is likely that we live in a bouncing Universe, I do believe that those astronomers who push the idea that the Universe will keep bouncing forever are likely to receive a lot of appreciation for their efforts.

But doesn't the accelerating expansion of the universe rule out cyclical cosmologies?

Dark Energy is overwhelming (I was going to write trumps, but that word has been ruined for normal usage) the attractive gravitational pull of all the rest of the material in the universe.
Just as zero is not equal to infinity, everything coming from nothing is illogical.
Top
3 posts • Page 1 of 1