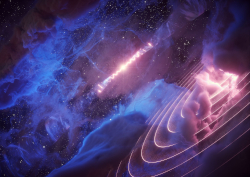 
Quasars are active galaxies that monstrous, supermassive black holes, more massive than a million Suns, lurking at the galaxy's center. These supermassive black holes fire jets tens of thousands of lightyears into intergalactic space. Microquasars are scaled-down version of extragalactic quasars, binary star systems comprising a compact object (a neutron star or black hole) and a relatively normal companion star. By pulling matter from their companions and swallowing it, microquasars launch powerful winds and jets, pouring energy and matter into the surrounding interstellar space. SS 433 is one famous microqusar in our Galaxy. SS 433 consists of a giant star having about 30 times the mass of our Sun orbited by a black hole of about 10 to 20 solar masses. As the black hole feeds off the companion star, it emits a narrow, precessing jet spiralling into space. A recent study with Fermi Gamma-Ray Space Telescope and the giant Arecibo radio telescope revealed a mysterious, high-energy gamma-ray signal, a kind of high-energy "heartbeat", coming from a cosmic gas cloud located about 100 light years away from SS 433. The surprising gamma-ray signal from this otherwise cold, innocuous cloud pulses with the rhythm of the precessing jet from the black hole in SS 433. This shows that somehow there must be a direct connection between the precessing jet from SS 433 and the gamma-ray pulsations from the cloud. Scientists have suggested that perhaps waves of fast protons, produced in the jets or perhaps near the black hole, traveling near the speed of light, periodically smash into the cloud, a high-energy collision which could cause the cloud to periodically emit waves of gamma rays. This image above is an artistic view of SS 433 and the strange gamma-ray heartbeats within the nearby nebula. The microquasar SS 433 and its precessing, spiral jet can be seen in the middle of the figure. The nearby gas cloud can be seen in the foreground at some distance from SS433, while the concentric circles represent the crest of the waves of the gamma ray heartbeats, pulsing in sync with the precession frequency of SS 433's jet.