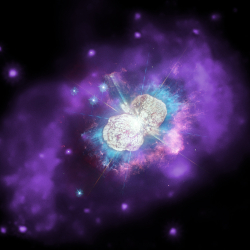 
Eta Carinae is the most luminous object within 10,000 lightyears of earth. But for nearly a century, we weren't even sure the star existed. This conundrum was the result of the strange, sudden outburst of the star in the middle of the 19th century, an event easily seen by observers (at least those in the southern hemisphere) since the outburst made Eta Carinae the brightest star in the southern sky. Shortly after the outburst the brightness of the star began to drop, fading below naked-eye sensitivity with two decades. We know now that this fading was due to the formation of dust in a massive cloud which was ejected from Eta Carinae during the outburst. About a century later, observations showed that even though Eta Carinae was very faint to human eyes, it was enormously bright in the infrared, due to hot dust in the obscuring bipolar ejecta around the star (the well-known Homunculus nebula, as it's called now). The dust is heated by the enormously bright, hot star system at the center of the Homunculus; the enormous ultraviolet radiation from this central star is blocked by the dust, but causes the dust to heat up and glow in the infrared. Thus the amount of infrared radiation is a measure of the brightness of the hidden star at the center of the nebula, the one that erupted more than 150 years ago. This star must be enormously bright, brighter than a million suns. The image above is a composite optical (in white) and ultraviolet (in blue) image from the Hubble Space Telescope, and an X-ray image from the Chandra X-ray Observatory (in purple). The ultraviolet image shows a feathery appearance surrounding the bipolar Homunculus Nebula, indicating that the Homunculus has holes which allows some UV light to leak out. This light loss means that Eta Carinae is even brighter than previously estimated. The X-ray emission is produced by gas heated to millions of degrees by the collision of the material thrown out from the star during the outburst with pre-existing, surrounding gas and dust. But some of the X-rays produced by the star itself penetrate through the gas and dust in the Homunculus. These X-rays directly show that Eta Carinae is not one star but two, a pair of very massive stars held bound in an usual, long period, highly elliptical orbit.