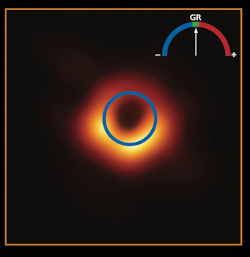 
Was Einstein ever wrong? Like all of us, he must have been wrong about some things (the probablistic nature of reality is probably the notable instance), but it's been difficult to disprove his theories of special and general relativity, or even modify them. These theories seem to pass every test that's been tried, like testing relativistic time dilation using the decay of subatomic particles called muons, explaining the precession of mercury, photographing the gravitational bending of light, timing the shortening of the periods of binary pulsars due to emission of gravitational radiation, or measuring ripples in spacetime caused by gravitational waves from merging black holes. Of course, because Einstein's theories deal with extreme physics (extremely high velocities, or extremely high matter densities), it can be difficult to rule out alternate theories (of which there are many). A spectacular prediction of Einstein's theory of gravity was the detection of the shadow of the central supermassive black hole by the Event Horizon Telescope. Now this black hole shadow is being used to test Einstein's theory of gravity in new and startling ways, to examine the strength of gravity very near the black hole's event horizon. The image above shows the shadow of M87's central supermassive black hole as reconstructed by the Event Horizon Telescope team. The three red circles show predictions of the size of the shadow for two proposed modifications of general relativity, compared to Einstein's prediction (in the center). Laws in which gravity is predicted to be weaker near the event horizon result in a smaller shadow (above left), while those which predict that gravity is much stronger than the prediction of general relativity result in a much larger black hole shadow. So far it looks like Einstein was right (once again) but additional observations of other black hole shadows will help tighten the case even further. But for now, Einstein seems "just right".