Jupiter has 79 (discovered) moons. Some of them haven't even been officially named yet.
Top

Jupiter has 79 (discovered) moons. Some of them haven't even been officially named.
Nothing in life is to be feared, it is only to be understood.
Top

Jupiter: Fifth Planet From Our Star

Jupiter orbits about 484 million miles (778 million kilometers) or 5.2 Astronomical Units (AU) from our Sun (Earth is one AU from the Sun).

Jupiter rotates once about every 10 hours (a Jovian day), but takes about 12 Earth years to complete one orbit of the Sun (a Jovian year).

Jupiter is a gas giant and so lacks an Earth-like surface. If it has a solid inner core at all, it’s likely only about the size of Earth.

Jupiter's atmosphere is made up mostly of hydrogen (H2) and helium (He).

Jupiter has more than 75 moons.

In 1979 the Voyager mission discovered Jupiter’s faint ring system. All four giant planets in our solar system have ring systems.

Nine spacecraft have visited Jupiter. Seven flew by and two have orbited the gas giant. Juno, the most recent, arrived at Jupiter in 2016.

Jupiter cannot support life as we know it. But some of Jupiter's moons have oceans beneath their crusts that might support life.

Jupiter's Great Red Spot is a gigantic storm that’s about twice the size of Earth and has raged for over a century.

In the process of tidal heating, the gravitational pull of Jupiter's satellites and the planet itself stretches and squeezes the satellites enough to warm them. As a result, some of the icy moons are warm enough to house oceans of liquid water, and in the case of the rocky moon Io, tidal heating turns the rock into magma.
Top

The most well-known facts about Jupiter were already mentioned here so I wanted to add some information about its moons. For example Ganymede is the largest moon of Jupiter and generally the largest in the system. Ganymede is larger than the planet Mercury.
And Europa, the moon of Jupiter, is believed to have an ocean of liquid water beneath a layer of icy surface.
What is Io concerned - it is volcanically active satellite and the height of the mountains reaches 16 kilometers.
By the way, have you heard about Europa Jupiter System Mission which was planned to be held in 2020? And have you seen re-processed images of Europa's surface from NASA?
Top

Charlotte Bridgestone wrote: ↑Tue Jun 01, 2021 11:11 am
What is Io concerned - it is volcanically active satellite and the height of the mountains reaches 16 kilometers.

Io's Pele volcano is certainly big and generates very tall plumes but I can't find any verification that it "reaches 16 kilometers" by any reasonable metric. 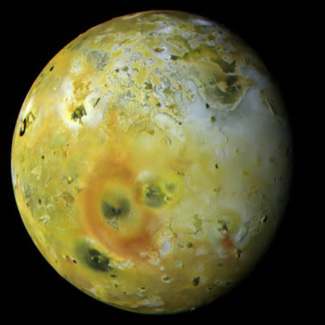 
<<Olympus Mons is an enormous shield volcano on the planet Mars. The volcano has a height of over 21.9 km as measured by the Mars Orbiter Laser Altimeter (MOLA). Olympus Mons is about two and a half times Mount Everest's height above sea level. It is one of the largest volcanoes, the tallest planetary mountain, and the second tallest mountain currently discovered in the Solar System, comparable to Rheasilvia on Vesta. It is often cited as the largest volcano in the Solar System. However, by some metrics, other volcanoes are considerably larger. Alba Mons, northeast of Olympus Mons, has roughly 19 times the surface area, but is only about one third the height. Pele, the largest known volcano on Io, is also much larger, at roughly 4 times the surface area, but is considerably flatter.

Pele has a volcanic crater, also known a patera, 30 km by 20 km in size, which lies at the base of the northern tip of the mountain Danube Planum. The patera has multiple floor levels, with a higher north-eastern section and a lower section that consists of an east-west-trending graben. Volcanic activity at Pele, as seen in images taken by Galileo in October 2001 while Pele was on Io's night side, appears to be limited to small thermal "hot-spots" along the margins of the patera and a more intense thermal emission source within a dark area in the southeast portion of the patera floor. This distribution of activity, combined with Pele's stability as a hotspot in terms of temperature and power emitted, suggests that Pele is a large, active lava lake, a combination of eruption style and intensity of activity not seen elsewhere on Io. The small hotspots seen in the Galileo data represent areas where the crust of the lava lake breaks up along the margins of the patera, allowing fresh lava to become exposed at the surface. The southeastern portion of the patera, an area of dark terrain in Voyager 1 imagery, is the most active region of the Pele volcano, with the most extensive region of hot lava at Pele. This area is thought to be a vigorously overturning lava lake, suggestive of a combination of a large mass flux of lava to the lake from a magma reservoir below the surface and a large mass fraction of dissolved volatiles like sulfur dioxide and diatomic sulfur. Given Pele's brightness at near-infrared wavelengths, activity at this portion of the lava lake may also result in lava fountaining.>>

Here is additional information about mountains on Io :

There you can find that the highest mountain on its surface reaches 17,5 km (Boösaule Montes, at 17,500 metres (57,400 ft), taller than any mountain on Earth.). This information was obtained through research of Galileo and Voyager missions.
Top

There you can find that the highest mountain on its surface reaches 17,5 km (Boösaule Montes, at 17,500 metres (57,400 ft), taller than any mountain on Earth.). This information was obtained through research of Galileo and Voyager missions.

https://en.wikipedia.org/wiki/Bo%C3%B6saule_Montes wrote:
<<South Boösaule Mons, the highest mountain of Jupiter's moon Io, is one of the tallest mountains in the Solar System. It is located just northwest of the volcano Pele, in the Boösaule Montes. The official name of the mountain range [Greek Βοὸς αὐλή Boos aylē 'Cow pen'] was given in honor of the cave in Egypt where Io gave birth to Epaphus, and approved by the IAU in 1985. South Boösaule has a relative height of 18.2 km (17.5 km from the foot), dimensions of 145 × 159 km (the diameter of the mountain range is 540 km), and it covers an area of 17,900 km2. On the south-east side of the mountain there is a steep cliff up to 15 km high.>>

The highest (southern) peak of the Boösaule Montes as imaged by Voyager 1.

North is to the upper left. This image was created from PIA00323 by cropping and sharpening. NASA's description of the uncropped image is as follows: The eruption of Pele on Jupiter's moon Io. The volcanic plume rises 300 kilometers above the surface in an umbrella-like shape. The plume fallout covers an area the size of Alaska. The vent is a dark spot just north of the triangular-shaped plateau (right center). To the left, the surface is covered by colorful lava flows rich in sulfur.[/quote]

And what about another moon of Jupiter - Callisto? As a child I was fond of Greek mythology and I remember the story of the character after whom the second largest moon of Jupiter was named. The girl took a vow of innocence and always accompanied the goddess Artemis on the hunt. However, the loving Zeus (among the Romans - Jupiter) seduced the young beauty and took possession of her in the form of Artemis herself. Callisto became pregnant and was driven away by Artemis. To hide and protect Callisto from the jealousy and revenge of his wife Hera, Zeus turned her into a bear. Then, according to legend, he moved Callisto and her son to sky, where they began to be called the Big (Ursa Major) and Little Bear (Ursa Minor).
As for me, it is interesting to find out how celestial bodies were named and after whom

And some general facts about directly the moon. Callisto revolves around Jupiter in a regular circular orbit at a distance of 1.88 million km. From this distance, Jupiter looks 8.7 times the size of the Moon in the earth's sky. Callisto's diameter is 4800 km - it is the third largest satellite of the planet in our solar system (after Ganymede and Titan, the moon of Saturn). Callisto is nearly the size of Mercury, but the mass of Jupiter's moon is only a third of the mass of Mercury. Of all the Galilean moons, Callisto is the farthest from Jupiter and has the lowest density (about 1.83 g / cm3).
Top
18 posts • Page 1 of 1