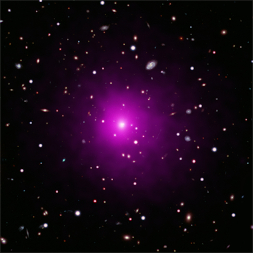 
Monster, supermassive black holes seem to reside at the very centers of most galaxies we see in the Universe. In fact, there's a mysterious connection between the mass of the central, supermassive black hole and the properties of the galaxy in which it resides, even though on the galactic scale the supermassive black hole is tiny. Often, these supermassive black holes accrete galactic matter from their surroundings and generate an outpouring of X-rays, optical light, and radio-emitting particle beams. So such monsters are not usually shy about revealing themselves. The image above shows an unusual case, however. This image above shows a composite of X-ray emission (from observations with the Chandra X-ray Observatory, in pink), ground-based infrared emission (in red), and an optical image (in green and blue) from the Hubble Space Telescope and from the Subaru telescope in Hawaii, of the central galaxy in the cluster of galaxies known as Abell 2261. Based on the properties of this galaxy, it should contain an extremely massive central black hole with a mass between 3 and 100 billion times the mass of the Sun (and about 1000 times more massive that Sgr A*, the supermassive black hole at the center of our own Milky Way galaxy). Normally, such a supermassive black hole would produce enormous amounts of X-ray emission at the very center of the galaxy. Surprisingly, however, the deep Chandra image shows no sign of any such emission. So where's the black hole? Perhaps, like Sgr A*, the black hole is not accreting actively. Another wilder possibility is that, perhaps, this galaxy collided with another, and, when the galaxies crashed together, their central black holes merged, generating an enormous amount of gravitational radiation which might have kicked the merged, even-more-supermassive black hole from the combined galaxy. This would mean that, somewhere, there's an unseen, supermassive black hole speeding through intergalactic space. Could it be headed our way?


CXC: On the Hunt for a Missing Giant Black Hole

Abell 2261: On the Hunt for a Missing Giant Black Hole 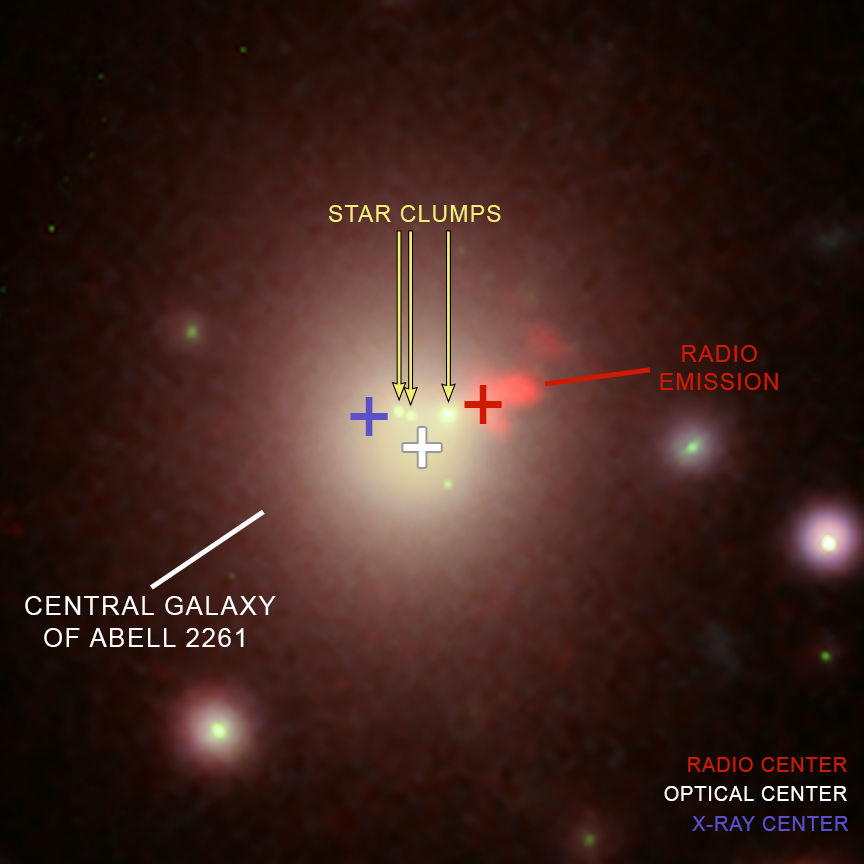 The mystery surrounding the whereabouts of a supermassive black hole has deepened.

Despite searching with NASA's Chandra X-ray Observatory and Hubble Space Telescope, astronomers have no evidence that a distant black hole estimated to weigh between 3 billion and 100 billion times the mass of the Sun is anywhere to be found.

This missing black hole should be in the enormous galaxy in the center of the galaxy cluster Abell 2261, which is located about 2.7 billion light years from Earth. ...

Using Chandra data obtained in 1999 and 2004 astronomers had already searched the center of Abell 2261's large central galaxy for signs of a supermassive black hole. They looked for material that has been superheated as it fell towards the black hole and produced X-rays, but did not detect such a source.

Now, with new, longer Chandra observations obtained in 2018, a team led by Kayhan Gultekin from the University of Michigan in Ann Arbor conducted a deeper search for the black hole in the center of the galaxy. They also considered an alternative explanation, in which the black hole was ejected from the host galaxy's center. This violent event may have resulted from two galaxies merging to form the observed galaxy, accompanied by the central black hole in each galaxy merging to form one enormous black hole. ...

The authors concluded that either there is no black hole at any of these locations, or that it is pulling material in too slowly to produce a detectable X-ray signal. ...


Chandra Observations of Abell 2261 Brightest Cluster Galaxy,
a Candidate Host to a Recoiling Black Hole ~ Kayhan Gultekin et al
viewtopic.php?t=29863
Know the quiet place within your heart and touch the rainbow of possibility; be
alive to the gentle breeze of communication, and please stop being such a jerk. — Garrison Keillor
Top
2 posts • Page 1 of 1