I Spent the last 3 months photographing The Orion Nebula And Running man nebula as much as I could. I really wanted to go all out on this target, and it almost broke me a few times. getting the details in the core and everything else looking the way it should was a lot more of a challenge than I anticipated. But I finally ended up with a result i'm quite proud of, and I hope you all enjoy it! 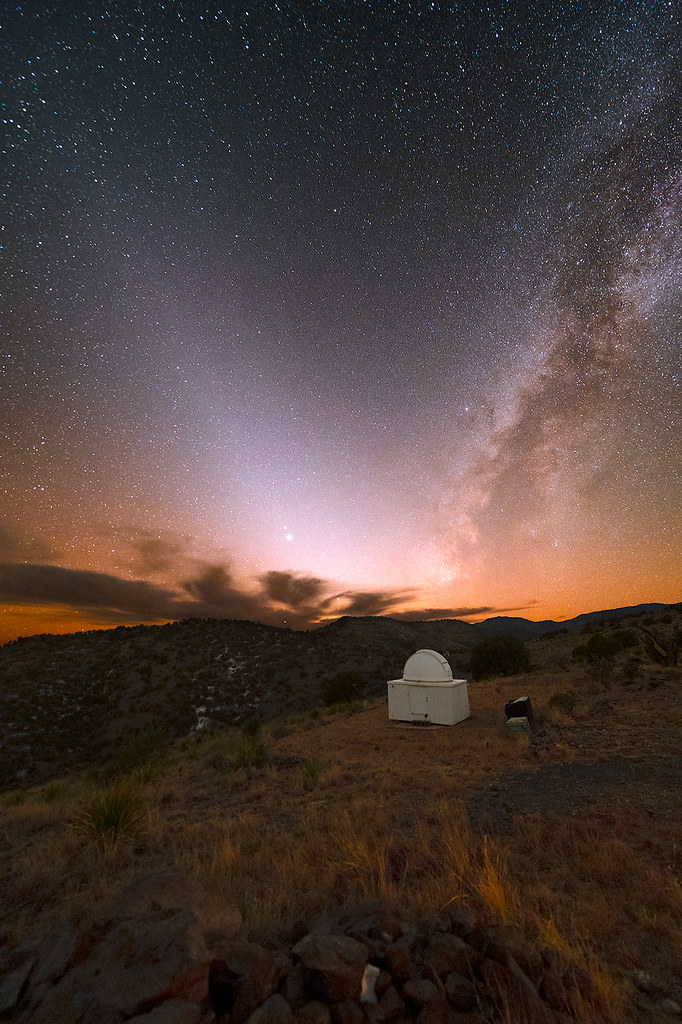 I find chasing dark skies to be an incredibly fulfilling experience. Standing beneath thousands of visible stars appearing to sit on a blanket of black velvet background sky, those stars feel so close you can reach up and pull them out of the sky! Here's a view of the Milky Way setting with the Zodiacal Light angling off to the left as a column of dust is illuminated by sunlight.
Top

Pleiades star cluster is one of the most distinct things on the sky since I was a child. I had no idea how much detail is around there! 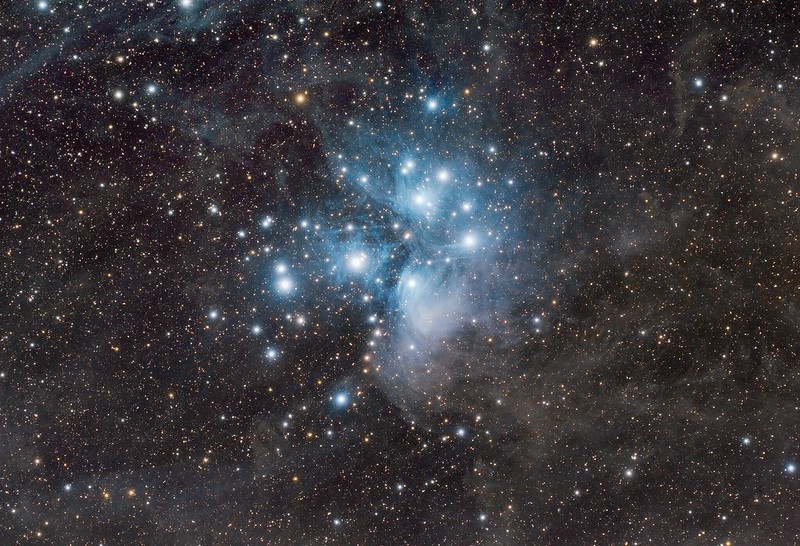 The Wizard Nebula in Cepheus
NGC 7380 is a young open cluster of stars in the northern circumpolar constellation of Cepheus, discovered by Caroline Herschel in 1787. The surrounding emission nebulosity is known colloquially as the Wizard Nebula. 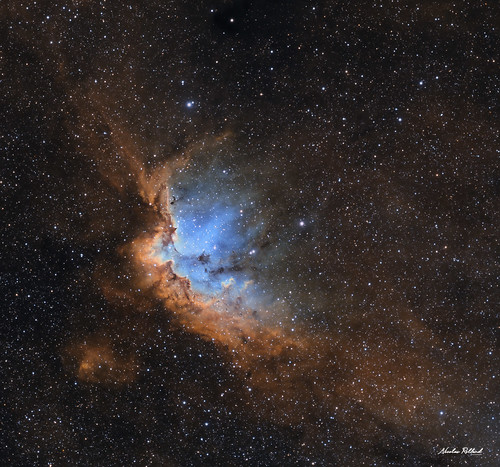 The Wizard Nebula in Cepheus by Nicolas Rolland, sur Flickr 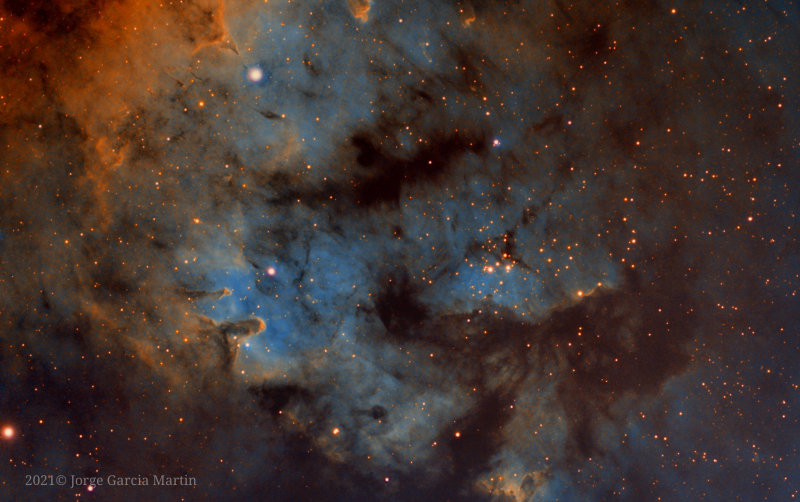 The Tadpoles Nebula (IC410) and Flaming Star Nebula in the Constellation of Auriga.
I took this HaSHO image last week on a very rare almost clear night. In fact it was the clearest night in northern Vermont since last July!. Rather than completing some earlier projects I thought I’d shoot something entirely new, and go for these subjects as they (almost) fit on the same frame at 620mm focal length..
The Tadpoles Nebula is so called due to the two light colored tadpole shaped dust and gas clouds that look like they are swimming upwards to the center of the nebula. These are star forming regions, similar to the famous “Pillars of creation” imaged by Hubble in the Eagle Nebula.
To get an idea of scale each tadpole is 10 light years long!, more than twice the distance the earth is from its nearest stellar neighbor, Proxima Centauri.
To the left is the Flaming Star nebula ( IC 405) which surrounds the variable star AE Aurigae. AE Aurigae is a “runaway” star ejected from gravitational perturbations in the Orion Nebula more than 2 million years ago.
Its interesting to note that although these two nebulae appear close together the flaming star is 1500 Light years distant, whereas the Tadpoles Nebula is 12,000 lightyears away and over 100 light years across.
This image is processed in the “Hubble Palette where red is aligned with Sulphur emissions, Green with Hydrogen , and Blue with Oxygen .
Tech Data : Celestron RASA 11”, CGX Mount, ZWO ASI 6200MMPro cooled (Mono) camera.
Ha 12 x 5min, OIII 18 x 5 mins, SII 9 x 5 mins, darks, flats, bias frames
Software: Stacked in DSS, Processed in Pixinsight and PS 2021
You do not have the required permissions to view the files attached to this post.
Top 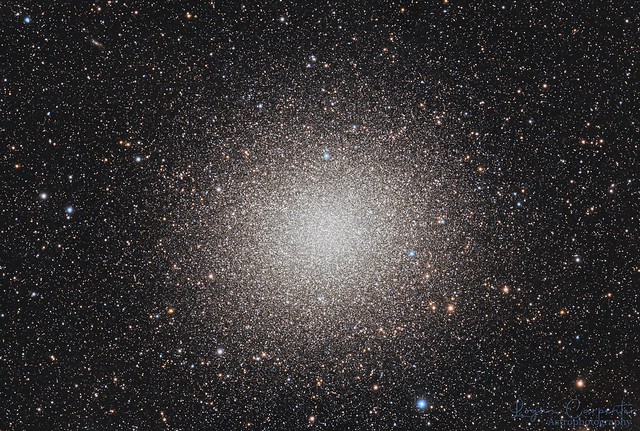 Omega Centauri (NGC5139) is a globular cluster in the constellation of Centaurus, first identified in 1677. At approx 17,000 light yearts from earth, it is the largest known globular cluster in vthe Milky Way and has a diameter of about 150 light years. It is estimated to contain around 10 million. It is thought to be a dwarf galaxy that has been stripped of it's stars although this idea might change as Hubble recently identified multiple small black holes within another globular cluster NGC6397.
Image location: Auckland, New Zealand
Telescope: Skywatcher Esprit 120ED
Camera: ASI294mcPro with Baader Neodymium filter
41 x 3 min exposures for total integration of 2.05hrs

Full info @ : https://www.kinchastro.com/sh2-308-dolphin-nebula.html
You do not have the required permissions to view the files attached to this post.
Top 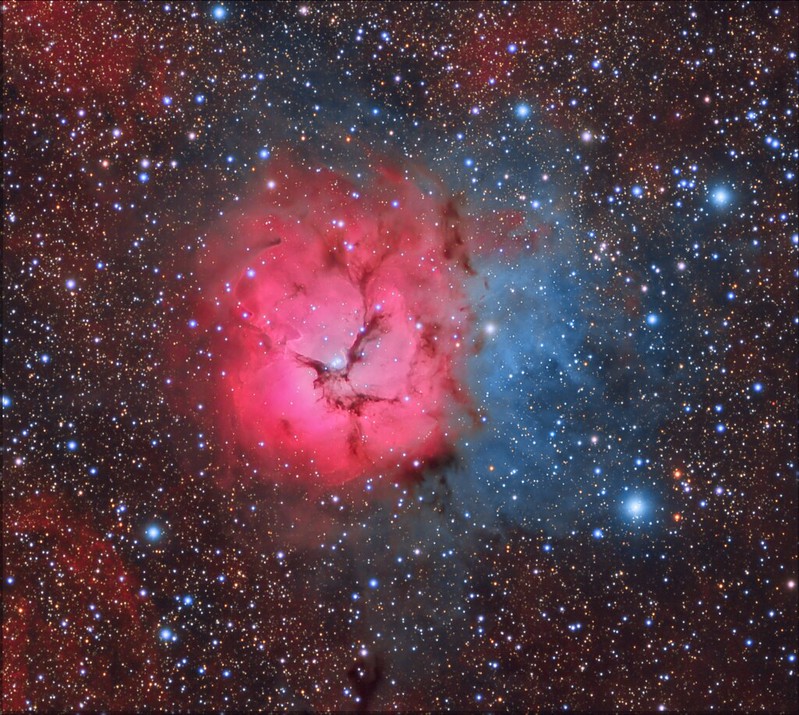 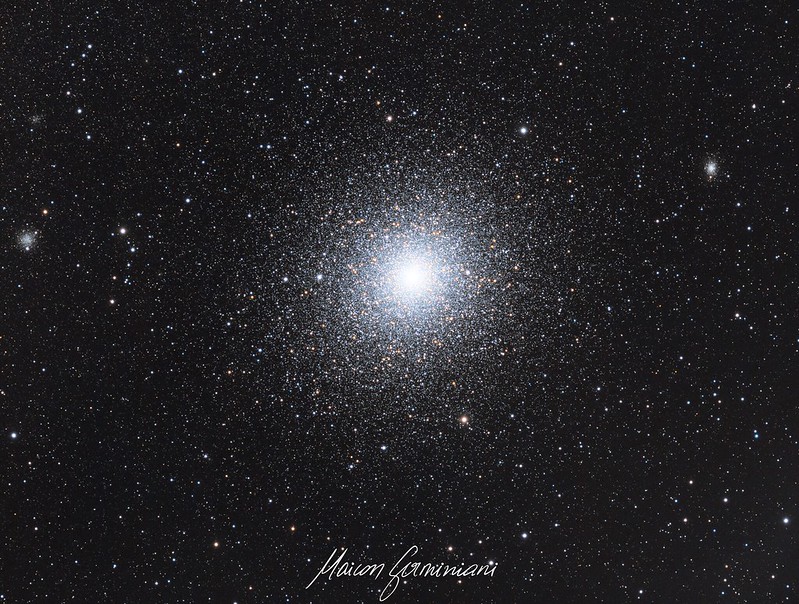 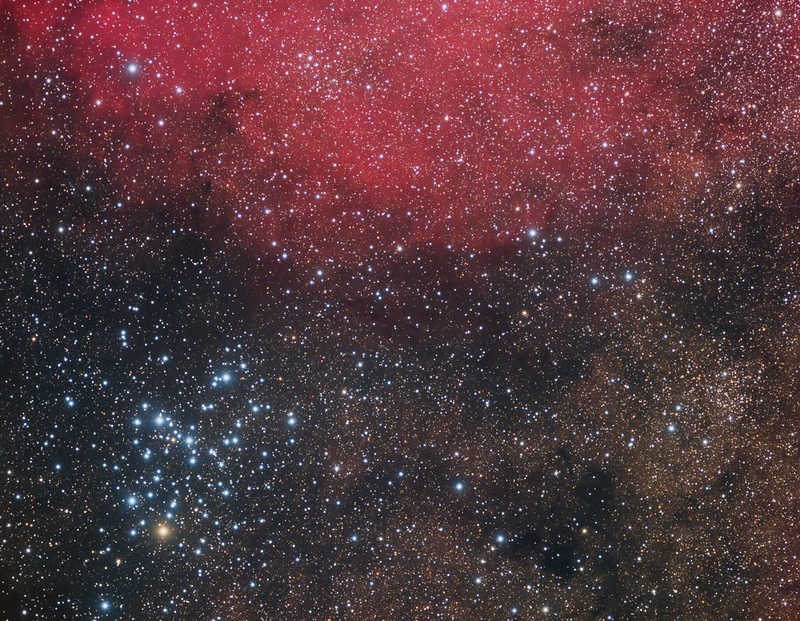 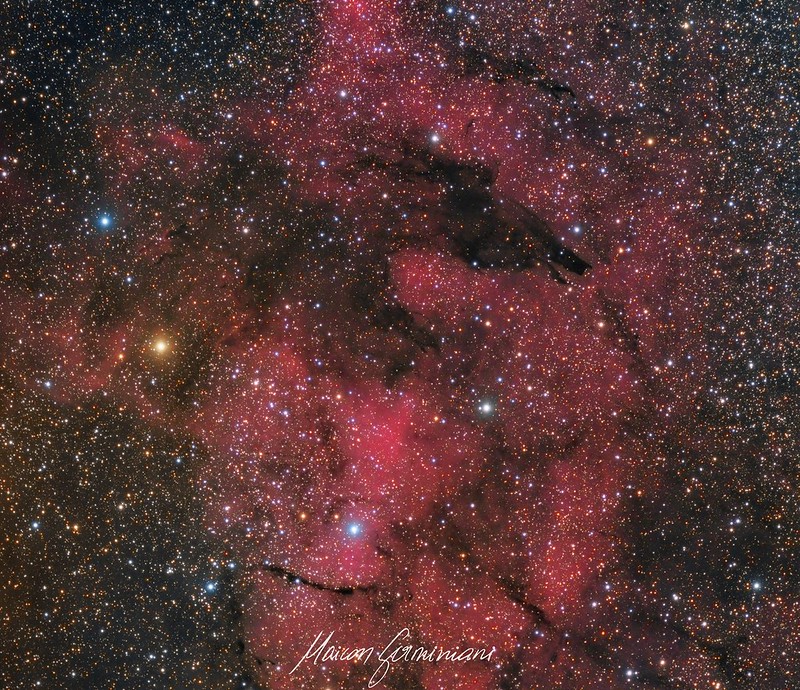 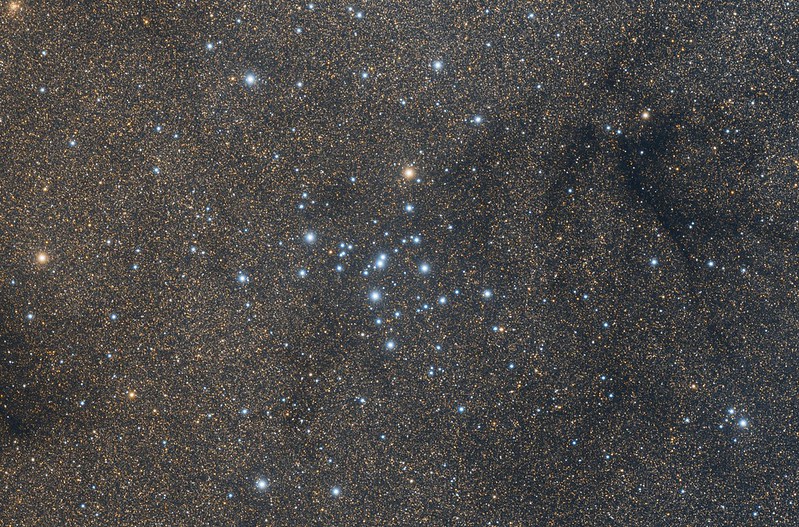 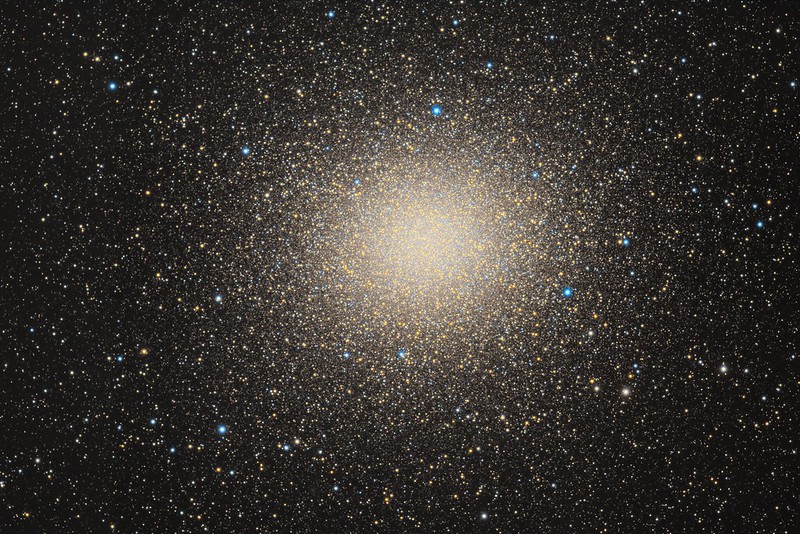 M42 and Running man Nebula
Imaged in Jan 2021 in Northern Vermont, USA
A blend of 3 sets of exposures at 10 min, 2 min and 30seconds to go from dust lanes to core.

Equipment:
RASA 11". CGX mount, ASI 6200 MC pro
Processd in Pixinsight and Photoshop.
You do not have the required permissions to view the files attached to this post.
Top

It's an image of the Heart Nebula together with the Soul Nebula, taken with my DSLR from my home in The Netherlands.
I hope you like it!

Heart_and_Soul_Nebula_90_frames_300s_iso6400_Lenhance_12_november_2020 pps.jpg
You do not have the required permissions to view the files attached to this post.
Top

Happy to present my recent images from Winter 2020/21. These are from our dual remote systems in Fort Davis, Texas consisting of:

Then we went to the Angel in Monoceros, NGC 2170. L/OSC of 22.5 hours:
NGC 2170.jpg
All images copyright Casey Good/Steve Timmons
You do not have the required permissions to view the files attached to this post.
Last edited by goodastronomy on Tue Feb 16, 2021 12:43 am, edited 1 time in total.
Top

And a few more:

Messier 78 in Orion, which my wife likes to refer to as a "Cosmic Waterfall":
M78.jpg

All images copyright Casey Good/Steve Timmons
You do not have the required permissions to view the files attached to this post.
Top

Hi friends!
Very different from the ones I usually see from M78.
This image contains Hydrogen Halpha, in the molecular field of Orion. M78 is a reflection nebula and therefore no broadband signal appears. So I wanted to show both parts. Halpha and LRGB
It has been a very hard process and a total of 17h of integration
Equipment:
Takahashi FSQ106 f5
Atik 460EXm
Paramount ME 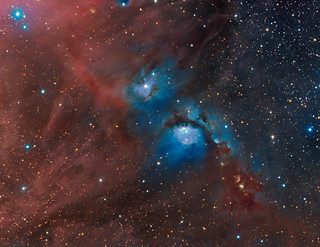 A bit late for the Christmas season but...
...the Cone Nebula and Christmas Tree Cluster are about 2,600 light years away in the constellation of Monoceros.

Taken over 2 nights (Feb 10 and Feb 12 2021) from Bortle 5 back garden in UK with Ha narrowband for the first night and RGB filters for the second night. My photo of the largest planetary nebula: Sh2-216 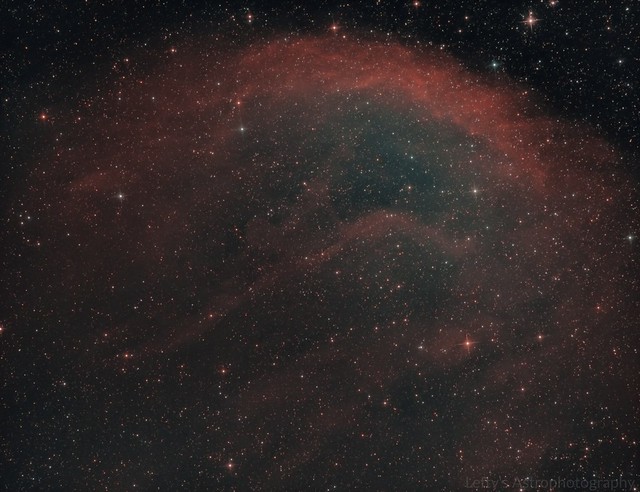 
This is 60 hours of narrowband exposure from my Bortle 6 driveway. Captured using a 6" f/4 newtonian, ASI1600, and Astrodon filters on an Orion Sirius mount.

One of the dozens of red sprites that I managed to record on the night of February 1, 2021, that occurred above the thunderstorms in the Aegean Sea between the Greek Island of Chios and Turkey. The recording took place west of the storm and at a distance of 200km away.
Red sprite is classified as TLEs (Transient Luminous Event) and is a very rare atmospheric phenomenon that is directly associated with positive CG's in (usually) highly active storm clusters. 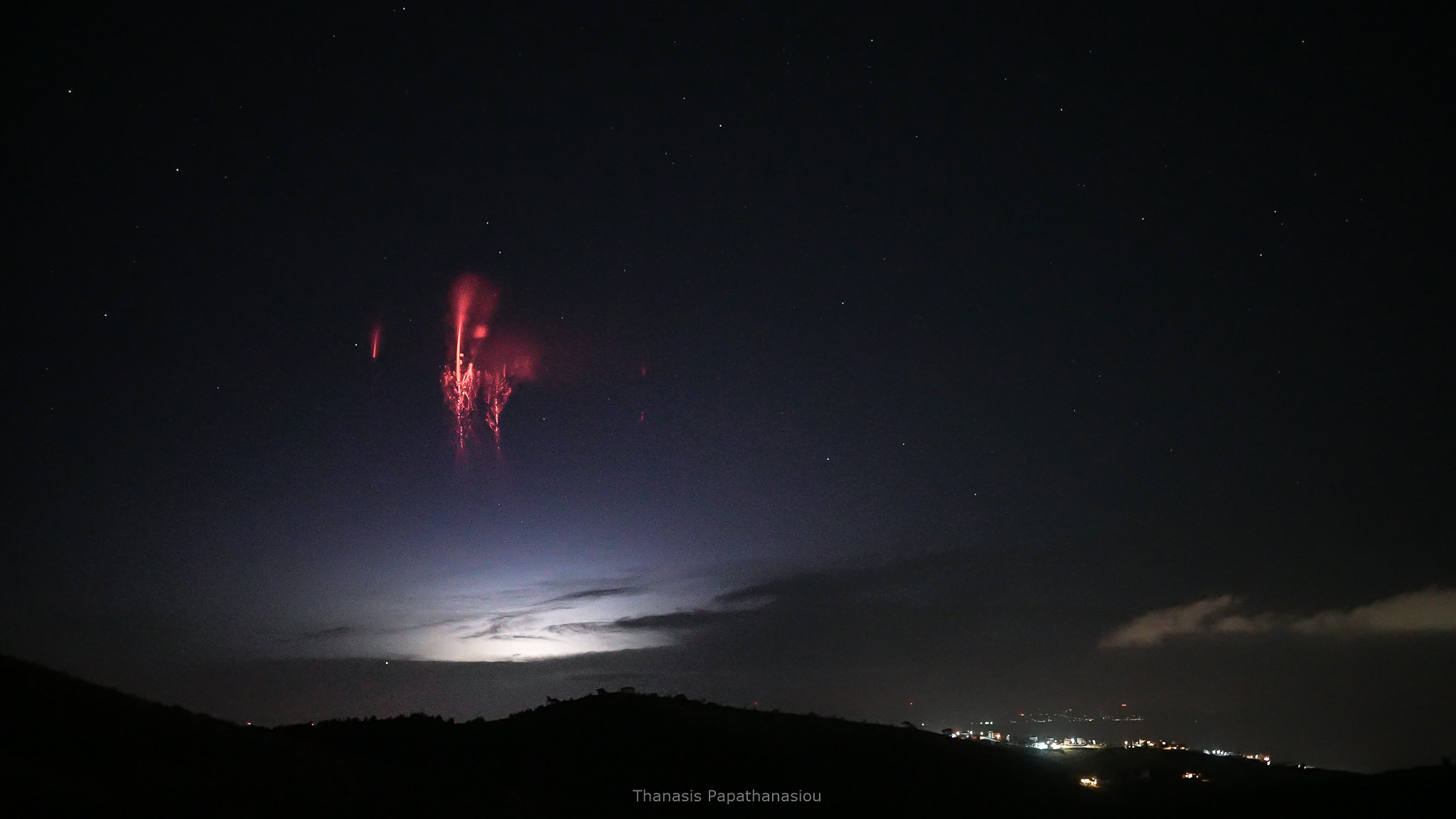