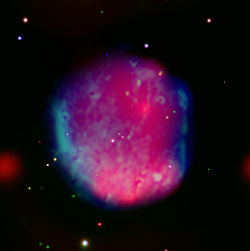 
When mapping the entire sky, you're bound to find some interesting things never seen before. This is especially true if you're mapping the sky in high-energy X-ray radiation, since X-rays are produced by extreme objects: gravitationally accreting black holes and neutron stars, superstrong magnetic fields, extremely hot matter, powerful flares from stars, and the supernova explosions of dead and dying stars. The eROSITA telescope on the SRG spacecraft was designed to provide such a view of the entire X-ray sky. SRG, with eROSITA was launched on July 13, 2019, and eROSITA completed its first scan of the X-ray sky on June 11, 2020. Analysis of this trove of data by the eROSITA team is revealing one treasure after another. The most recent discovery is the image above, which shows a huge cloud of X-ray emitting debris produced by the supernova explosion of a (former) star in the Milky Way. This supernova remnant is the largest ever discovered in X-rays. The X-ray emitting debris produced by the explosion, shown in red in the image above, is produced by the superhot gas when the star ripped itself apart; this hot gas is bounded by a plasma of fast moving charged particles swept up by the power of the explosion, which emits in low-energy radio waves (shown in blue in the image above). This supernova remnant has been named Hoinga, which is the medieval name of Bad Hönningen am Rhein, the home town of the leader of the team that discovered it. Hoinga is huge, about 90 times the size of the full moon, and, unlike most of the supernova remnants in the Milky Way, is located far above the rotating disk where most of the stars in the Milky Way are located. The eROSITA telescope will continue to scan the sky from its lonely perch at the sun-earth L2 point, about a million miles from earth, building up an ever-deeper image of the high-energy Universe.


MPE: Hoinga: The Largest Supernova Remnant Ever Discovered with X-rays

Hoinga: The Largest Supernova Remnant Ever Discovered with X-rays 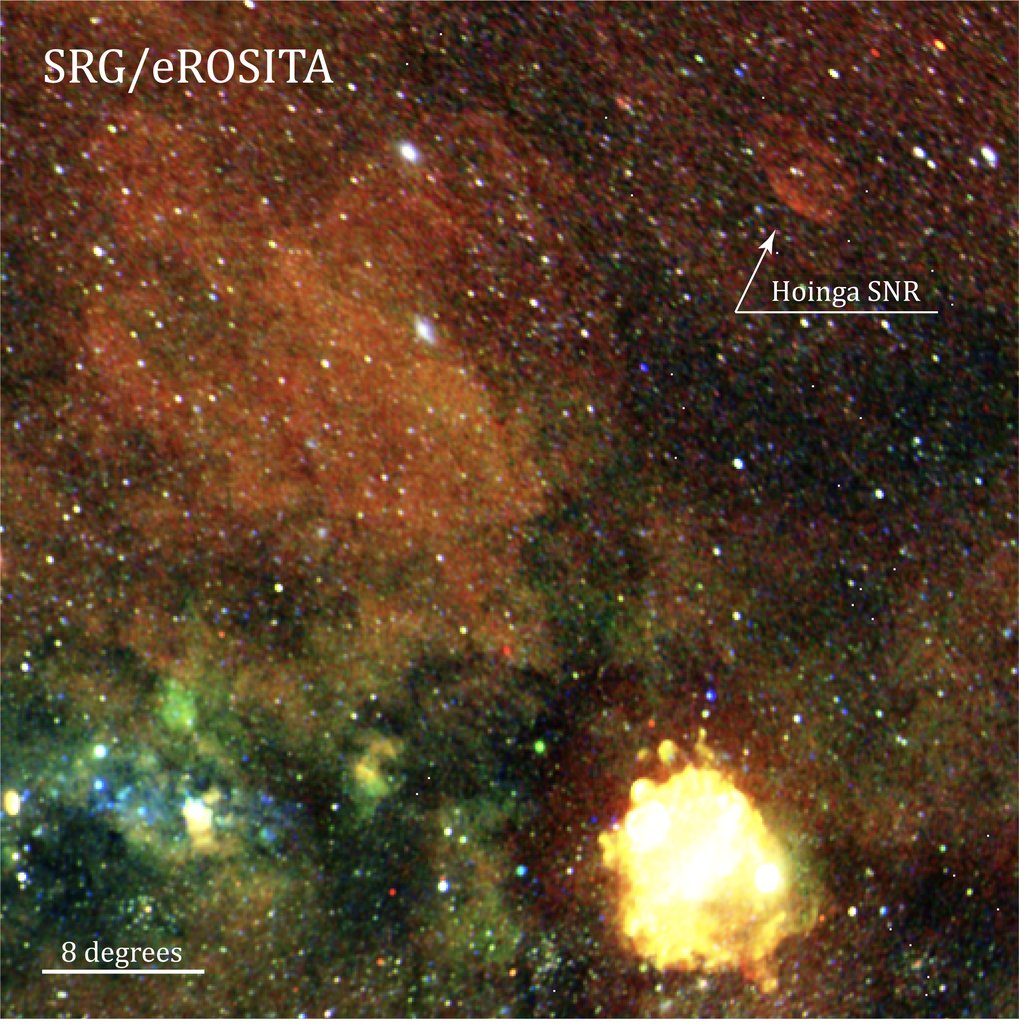 Cutout of the first SRG/eROSITA all-sky survey. The Hoinga supernova remnant is marked. The large bright source in the lower quadrant of the image is from the supernova remnant “Vela” with “Pupis-A”. The image colours are correlated with the energies of the detected X-ray photons. Red represents the 0.3-0.6 keV energy range, green the 0.6-1.0 keV and blue the 1.0-2.3 keV waveband. © SRG/eROSITA

In the first all-sky survey by the eROSITA X-ray telescope onboard SRG, astronomers at the Max Planck Institute for Extraterrestrial Physics have identified a previously unknown supernova remnant, dubbed “Hoinga”. The finding was confirmed in archival radio data and marks the first discovery of a joint Australian-eROSITA partnership established to explore our Galaxy using multiple wavelengths, from low-frequency radio waves to energetic X-rays. The Hoinga supernova remnant is very large and located far from the galactic plane – a surprising first finding – implying that the next years might bring many more discoveries.

Massive stars end their lives in gigantic supernova explosions when the fusion processes in their interiors no longer produce enough energy to counter their gravitational collapse. But even with hundreds of billions of stars in a galaxy, these events are pretty rare. In our Milky Way, astronomers estimate that a supernova should happen on average every 30 to 50 years. While the supernova itself is only observable on a timescale of months, their remnants can be detected for about 100 000 years. These remnants are composed of the material ejected by the exploding star at high velocities and forming shocks when hitting the surrounding interstellar medium.

About 300 such supernova remnants are known today – much less than the estimated 1200 that should be observable throughout our home Galaxy. So, either astrophysicists have misunderstood the supernova rate or a large majority has been overlooked so far. An international team of astronomers are now using the all-sky scans of the eROSITA X-ray telescope to look for previously unknown supernova remnants. With temperatures of millions of the degrees, the debris of such supernovae emits high-energy radiation, i.e. they should show up in the high-quality X-ray survey data.


Hoinga: A Supernova Remnant Discovered in the SRG/eROSITA All-Sky Survey eRASS1 ~ W. Becker et al
Know the quiet place within your heart and touch the rainbow of possibility; be
alive to the gentle breeze of communication, and please stop being such a jerk. — Garrison Keillor
Top

https://phys.org/news/2021-03-hoinga-debris-stellar-explosion-unexpected.html wrote: <<An international team of astronomers are now using the all-sky scans of the eROSITA X-ray telescope to look for previously unknown supernova remnants. With temperatures of millions of the degrees, the debris of such supernovae emits high-energy radiation, i.e. they should show up in the high-quality X-ray survey data.

"We were very surprised that the first supernova remnant popped up straight away," says Werner Becker at the Max Planck Institute for Extraterrestrial Physics. Named after the first author's hometown's Roman name, "Hoinga" is the largest supernova remnant ever discovered in X-rays. With a diameter of about 4.4 degrees, it covers an area about 90 times bigger than the size of the full Moon. "Moreover, it lies very far off the galactic plane, which is very unusual," he adds. Most previous searches for supernova remnants have concentrated on the disk of our galaxy, where star formation activity is highest and stellar remnants therefore should be more numerous, but it seems that many supernova remnants have been overlooked by this search strategy.

After the astronomers found the object in the eROSITA all-sky data, they turned to other resources to confirm its nature. Hoinga is—although barely—visible also in data taken by the ROSAT X-ray telescope 30 years ago, but nobody noticed it before due to its faintness and its location at high galactic latitude. [The eROSITA X-ray telescope will perform a total of eight all-sky surveys and is about 25 times more sensitive than its predecessor ROSAT.] However, the real confirmation came from radio data, the spectral band where 90% of all known supernova remnants were found so far.

"We went through archival radio data and it had been sitting there, just waiting to be discovered," marvels Natasha Walker-Hurley, from the Curtin University node of the International Centre for Radio Astronomy Research in Australia. "The radio emission in 10-year-old surveys clearly confirmed that Hoinga is a supernova remnant, so there may be even more of these out there waiting for keen eyes.">>