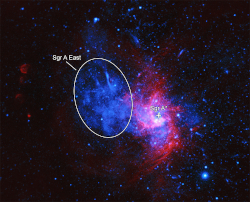 
Studies of exploding stars in distant galaxies have revealed a substantial type of peculiar supernovae. These supernovae, called "type Iax" by astronomers, produce less explosive power and eject less mass than other similar supernovae. This means that the way these stars explode is very different from the more common ways that stars explode. These strange supernovae produce unusual chemical abundances as well. Because these explosions have been identified in distant galaxies, millions of light years from earth, it's been hard to determine why, exactly, they are so peculiar. A recent X-ray study of a supernova remnant near the center of the Milky Way may provide important clues. This supernova remnant, called Sgr A East, was first identified in radio images and apparently lies close to Sgr A*, the supermassive black hole at the center of the Milky Way. Originally Sgr A East was thought to be the remnant of the explosive collapse of a star more than 10 times as massive as the Sun. But the remnant showed relatively large amounts of iron, more typical of supernovae explosions produced when white dwarf stars are pushed beyond their limits. New X-ray data from the Chandra X-ray Observatory suggests that this explosion, in fact, is a nearby example of the peculiar Iax class of exploding white dwarfs. Sgr A East is shown in the image above, a composite of a radio image (from the Jansky Very Large Array, in red) and a deep X-ray image (from Chandra, in blue). A chemical analysis of the X-ray data showed that the relative abundance of iron and other heavy elements is unlike the patterns seen in other exploding white dwarf or collapsing massive star supernovae. The chemical peculiarities suggest that Sgr A East falls into the unusual Iax supernova class. Additional study of this nearby supernova, and other Milky Way supernovae yet to be identified, may help astronomers finally determine the cause of these peculiar explosions.