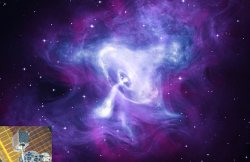 
Pulsars are rapidly spinning neutron stars with very strong magnetic fields which generate beams of radiation over nearly the entire electromagnetic spectrum, from low-energy radio waves to extremely high energy gamma rays. As the pulsar spins, the beam sweeps through space (a kind of celestial lighthouse), producing an observable pulse of radiation. The spin periods of neutron stars can be extremely short, and they can rotate tens or even hundreds of times in a second (about as fast as a rotating blade in a blender). Pulsars are extraordinary clocks, rivaling the precision of atomic clocks on earth, although rotation periods can change due to accretion of matter by the neutron star, or because of "starquakes" produced by sporadic fracturing of the neutron star's solid iron crust. The rise and fall of the pulses are generally regular in peak height as well as in time, too. But some pulsars, every so often, show radio pulses that, for a few millionths of a second, are hundreds to thousands of times brighter than usual. The origin of these "Giant Radio Pulses" is an astrophysical mystery. Previous studies have shown that these giant radio pulses are associated with smaller increases in the brightness of pulses seen in visible light. A new detailed study of the pulsar at the heart of the Crab Nebula (the remnant of a supernova seen from earth in 1054 CE) is advancing our understanding of how energetic these giant pulses are, which helps tell us how these extraordinary pulses are produced. The image above is a composite X-ray, optical and infrared image of the Crab Nebula, which extends out to about 5 lightyears from the central pulsar (the bright spot near the center of the nebula). This new study analyzed millions of X-ray pulses using 2 years of X-ray observations from the NICER facility on the International Space Station, along with data from Japanese radio telescopes at Kashima Space Technology Center and the Usuda Deep Space Center. The NICER observations show very precisely that the peak of the X-ray pulses increase by about 4% during giant radio pulses. That might not sound like much, but because X-ray radiation is so much more energetic than radio or even optical emission (the X-rays NICER monitors are about a million times more energetic than radio emission), the NICER result means that the total energy emitted during giant radio pulses is dozens or hundreds of times higher than previously suspected based on the radio data alone.

A pulsar is a type of rapidly spinning neutron star, the crushed, city-sized core of a star that exploded as a supernova. A young, isolated neutron star can spin dozens of times each second, and its whirling magnetic field powers beams of radio waves, visible light, X-rays, and gamma rays. If these beams sweep past Earth, astronomers observe clock-like pulses of emission and classify the object as a pulsar.

“Out of more than 2,800 pulsars cataloged, the Crab pulsar is one of only a few that emit giant radio pulses, which occur sporadically and can be hundreds to thousands of times brighter than the regular pulses,” said lead scientist Teruaki Enoto at the RIKEN Cluster for Pioneering Research in Wako, Saitama prefecture, Japan. “After decades of observations, only the Crab has been shown to enhance its giant radio pulses with emission from other parts of the spectrum.”

The new study ... analyzed the largest amount of simultaneous X-ray and radio data ever collected from a pulsar. It extends the observed energy range associated with this enhancement phenomenon by thousands of times. ...


Enhanced X-ray Emission Coinciding with Giant Radio Pulses from the Crab Pulsar ~ Teruaki Enoto et al
Know the quiet place within your heart and touch the rainbow of possibility; be
alive to the gentle breeze of communication, and please stop being such a jerk. — Garrison Keillor
Top
2 posts • Page 1 of 1