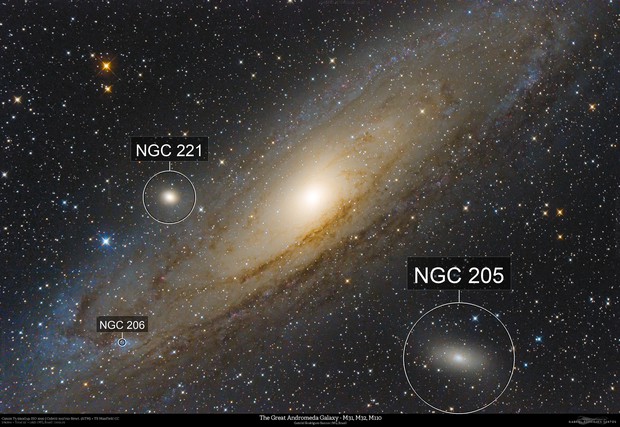 M32 (NGC 221) is a tiny, extremely compact dwarf elliptical satellite of Andromeda. Most likely M32 started out as a disk galaxy, but because it regularly passes right through the disk of Andromeda, the disk of M32 was stripped away by tidal forces, leaving only the very compact tiny bulge.

And what about Andromeda itself? How does it react to having a compact 3 billion ⊙ mass of stars regularly plunge through its disk? Don't you think it would set up some ripples in the pond that is the disk of our large sister galaxy?

I think it would!

And you are not alone with this thinking:

An almost head-on collision as the origin of two off-centre rings in the Andromeda galaxy (2006) wrote: Abstract.The unusual morphology of the Andromeda Spiral (Messier 31, the closest spiral galaxy to the Milky
Way) has long been an enigma. Although regarded for decades as showing little evidence of a violent history,
M 31 has a well-known outer ring of star formation at a radius of 10 kpc whose center is offset from the
galaxy nucleus. In addition, the outer galaxy disk is warped as seen at both optical and radio wavelengths. The
halo contains numerous loops and ripples. Here we report the discovery, based on analysis of previously-obtained
data, of a second, inner dust ring with projected dimensions 1.5 by 1 kpc and offset by ∼ 0.5 kpc from the
center of the galaxy. The two rings appear to be density waves propagating in the disk. Numerical simulations offer
a completely new interpretation for the morphology of M 31: both rings result from a companion galaxy plunging
head-on through the center of the disk of M 31. The most likely interloper is M 32. Head-on collisions between
galaxies are rare, but it appears nonetheless that one took place 210 million years ago in our Local Group of
galaxies