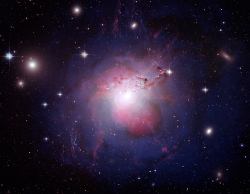 
For over a century, physicists have tried to construct an ultimate understanding of physical reality, a single "theory of everything" which would completely explain the way that matter and energy interact, from the tiniest quantum scale to the largest structures we know. A major sticking point is how to understand gravity, the weakest force we know, in the framework of the quantum physics which describe the weird reality experienced at incredibly tiny scales. String theories, so-called because they describe sub-atomic particles as vibrations of one-dimensional strings, offer perhaps the best hope of reconciling gravitational and quantum physics. But, at the present time we have no real evidence that such strings exist, and testing these theories has proven to be near impossible. Some string theories do predict the existence of new particles called axions. Axions are ultra-light particles similar to neutrinos, but much less massive and even harder to detect than neutrinos, since they should have nearly no capability to interact with photons or other "standard" particles. If axions could be proven to exist, this would help establish the string-like nature of reality, and might even provide the source of dark matter and dark energy, the mysterious components that dominate the Universe. Although nearly impossible to detect, in rare circumstances X-rays traveling through a large magnetic field could be converted into axion-like particles. This conversion might be seen through the study of X-rays passing through large clusters of galaxies possessing substantial magnetic fields. The image above is a multi-wavelength X-ray, radio and optical image of Perseus A, an active galaxy in the Perseus cluster of galaxies. The conversion of X-rays to axions would put a tiny but in principle identifiable signal in the distribution of X-ray photons from Perseus A. Observations with the Chandra X-ray Observatory and the XMM-Newton X-ray observatory, our two most powerful X-ray facilities, have not been able to confirm whether this conversion is happening. Scientists are looking forward to the powerful Athena X-ray Observatory, with its enormous X-ray mirror and exceptional energy resolution, to hopefully resolve this question. Athena is currently being developed by the European Space Agency with contributions from NASA, and is to be launched in the upcoming decade.

Searching for String Theory with Athena


String theory is a theory of quantum gravity. By representing particles as different modes of vibration on one-dimensional strings, string theory can provide a unified description of quantum field theory and gravity. However, there is as yet no experimental evidence for string theory. Even worse, string theory makes very few experimental predictions. One prediction generic to many string theory scenarios is the existence of ultra-light axion-like particles (ALPs). These ALPs could be much lighter even than neutrinos and would interact only very weakly with photons and other Standard Model particles. ALPs can act as both Dark Matter and Dark Energy, depending on their mass, and may have striking astrophysical signatures. In a background magnetic field, ALPs and photons can interconvert. If ALPs exist, there is some probability that a photon travelling through a magnetic field will turn into an ALP. In this case, the magnetic fields of galaxy clusters would be powerful photon to ALP converters. Through this effect, Athena observations of point sources shining through galaxy clusters will give us an unprecedented opportunity to search for ALPs.


Projected Bounds on ALPs from Athena ~ Joseph P. Conlon et al
Know the quiet place within your heart and touch the rainbow of possibility; be
alive to the gentle breeze of communication, and please stop being such a jerk. — Garrison Keillor
Top

A Monster Galaxy at the Heart of Perseus Cluster 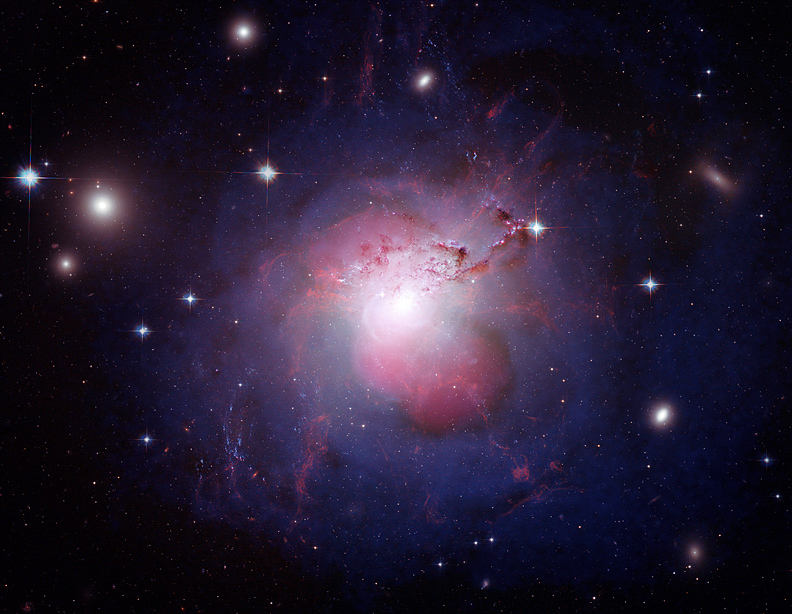 The active galaxy NGC 1275 is also a well-known radio source (Perseus A) and a strong emitter of X-rays due to the presence of a black hole in the center of the galaxy. The behemoth also lies at the center of the cluster of galaxies known as the Perseus Cluster. By combining multi-wavelength images into a single composite, the dynamics of the galaxy are more easily visible. Detail and structure from x-ray, optical and radio wavelengths combine for an aesthetically pleasing, but nonetheless violent depiction of events going on at the heart of the galaxy.

Chandra data from the Advanced CCD Imaging Spectrometer (ACIS) covers X-ray energies from 0.3-7keV. Hubble data from the Advanced Camera for Surveys covers optical wavelengths in the red, green and blue. Radio data from NRAO's Very Large Array at 328 MHz was also used. In the composite image, the X-ray data contribute to the soft violet shells around the outside of the center. The pinkish lobes toward the center of the galaxy are from radio frequencies. The radio emission, tracing jets from the black hole, fills the X-ray cavities. Dust lanes, star-forming regions, hydrogen filaments, foreground stars, and background galaxies are contributions from the Hubble optical data.


A Very Deep Chandra Observation of the Perseus Cluster: Shocks, Ripples and Conduction ~ A.C. Fabian et al
Know the quiet place within your heart and touch the rainbow of possibility; be
alive to the gentle breeze of communication, and please stop being such a jerk. — Garrison Keillor
Top

https://en.wikipedia.org/wiki/Axion wrote:
<<The axion is a hypothetical elementary particle postulated by the Peccei–Quinn theory in 1977 to resolve the strong CP problem in quantum chromodynamics (QCD). If axions exist and have low mass within a specific range, they are of interest as a possible component of cold dark matter.

Axion-like bosons could have a signature in astrophysical settings. In particular, several recent works have proposed axion-like particles as a solution to the apparent transparency of the Universe to TeV photons. It has also been demonstrated in a few recent works that, in the large magnetic fields threading the atmospheres of compact astrophysical objects (e.g., magnetars), photons will convert much more efficiently. This would in turn give rise to distinct absorption-like features in the spectra detectable by current telescopes. A new promising means is looking for quasi-particle refraction in systems with strong magnetic gradients. In particular, the refraction will lead to beam splitting in the radio light curves of highly magnetized pulsars and allow much greater sensitivities than currently achievable. The International Axion Observatory (IAXO) is a proposed fourth generation helioscope.

Axions can resonantly convert into photons in the magnetospheres of neutron stars. The emerging photons lie in the GHz frequency range and can be potentially picked up in radio detectors, leading to a sensitive probe of the axion parameter space. This strategy has been used to constrain the axion-photon coupling in the 5–11 μeV mass range, by re-analyzing existing data from the Green Bank Telescope and the Effelsberg 100 m Telescope. An novel, alternative strategy consists in detecting the transient signal from the encounter between a neutron star and an axion minicluster in the Milky Way.

Axions can be produced in the Sun's core when X-rays scatter in strong electric fields. The CAST solar telescope is underway, and has set limits on [axion] coupling to photons and electrons. Axions may be produced within neutron stars, by nucleon-nucleon bremsstrahlung. The subsequent decay of axions to gamma rays allows constraints on the axion mass to be placed from observations of neutron stars in gamma-rays using the Fermi LAT. From an analysis of four neutron stars, Berenji et al. (2016) obtained a 95% confidence interval upper limit on the axion mass of 0.079 eV.

In 2016, a theoretical team from Massachusetts Institute of Technology devised a possible way of detecting axions using a strong magnetic field that need be no stronger than that produced in an MRI scanning machine. It would show variation, a slight wavering, that is linked to the mass of the axion. The experiment is now being implemented by experimentalists at the university.>> 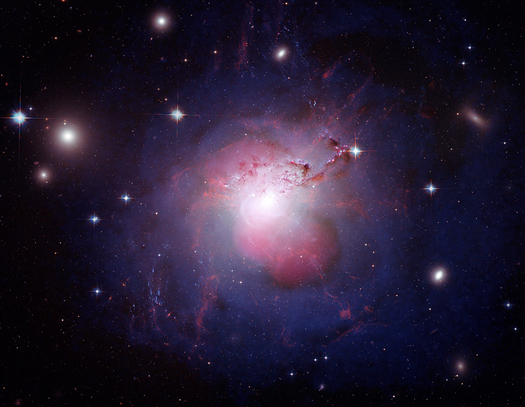 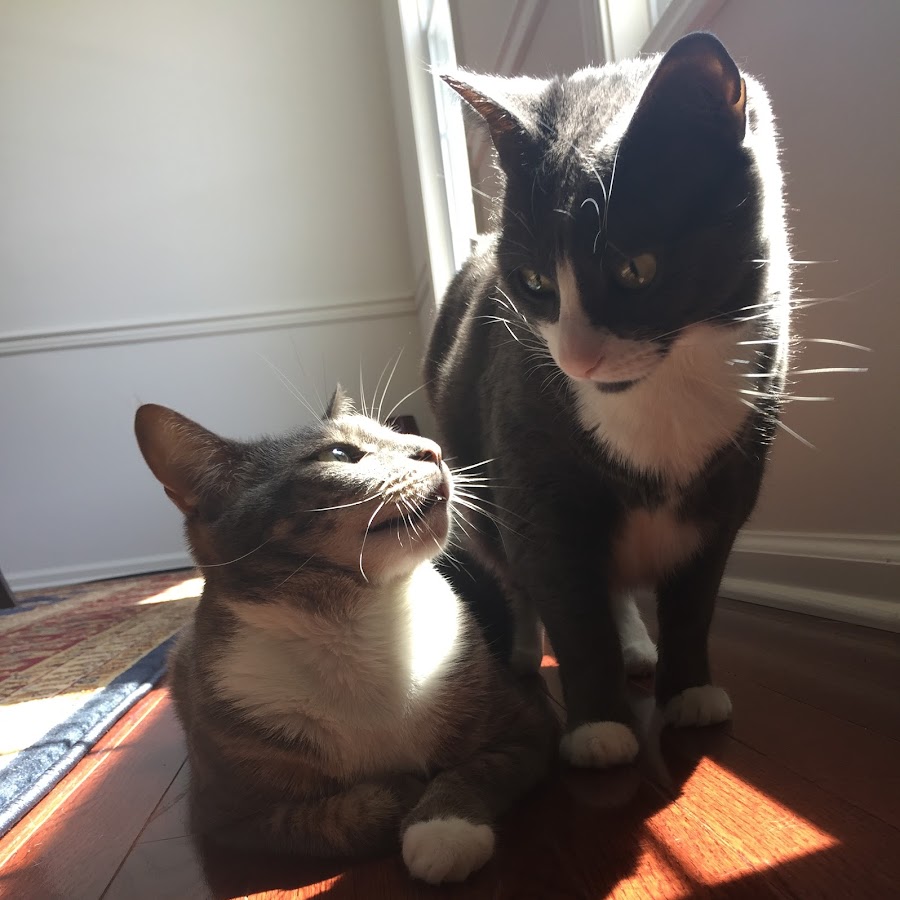