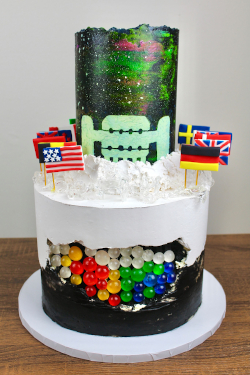 
Neutrinos are mysterious "ghost particles", the most abundant particles with mass in the Universe. They fly at nearly the speed of light, and play an important role in nuclear reactions and determining the structure of the Universe. They help astronomers pinpoint the most powerful and energetic processes ever seen. Neutrinos, however, are difficult to catch and detect, since they rarely interact with other subatomic particles; in fact trillions of neutrinos pass transparently through your body every second. Neutrinos were predicted to exist in the early 1930's exclusively by Wolfgang Pauli, but weren't actually observed until the early 1950's. Because neutrinos are so hard to detect, neutrino "telescopes" need to be very large to have a hope of seeing any. The coolest facillity to probe the type and origin of cosmic neutrinos is the IceCube Neutrino Observatory, an international collaboration lead by the University of Wisconsin-Madison. IceCube gets its name (and its coolness) since it's located in Antarctica and uses a cubic kilometer of the Antarctic ice sheet as a giant neutrino detector. IceCube has recently celebrated 10 years of operation, and during that time has made award-winning discoveries regarding the extreme sources of high-energy neutrinos in the Universe. The image above is the IceCube 10th anniversary cake, which was baked and decorated by UW-Madison graduate student Maria Prado. It representa a (not to scale) model of the IceCube facility sitting on the ice sheet, with balls of jelly "detector modules" below and the night sky, with the southern lights, above. The flags represent the member nations of the IceCube Collaboration. The discoveries made by IceCube only whets our appetite for more, and we're looking forward to delicious new results in the future. In the meantime, all ten years of IceCube data are now available to the scientific community and the general public - take a slice and see what delectable mysteries you might uncover.