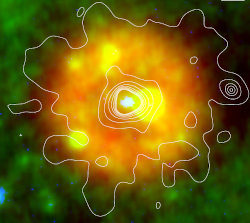 
There have been nine supernovae in the Milky Way bright enough to be seen by the unaided eye. The last such supernova was seen in AD 1604 (and is commonly named for Johannes Kepler, one of its more renowned eyewitnesses). Supernovae typically occur every 50-100 years, so we're a bit overdue for one of these titanic stellar explosions (keep an eye on Eta Carinae, a good candidate for the next blast). Five of these nine have been identified with hot, expanding blast waves (and sometimes the compact objects left behind by the blast have also been identified). A well-known example is the Crab Nebula (and the Crab pulsar, a rapidly-spinning neutron star at the heart of the nebula), which was observed in AD 1054. The remnants of some of these other supernovae are a bit more difficult to identify, given the imprecisions of estimating positions of these blasts seen centuries ago. One Milky Way supernova was recorded in AD 1181 by sky watchers in China and Japan, and evidently remained visible for about 3 months before fading away. Now, after nine centuries, astronomers believe they have finally found the remnant of this supernova, and have even identified the compact object left behind by the explosion. In 2013, an astronomer working with the "Deep Sky Hunters" group of amateur astronomers, discovered a rather innocuous extended nebula in some infrared images obtained by NASA's WISE space telescope (shown above left). This object is within a few degrees of the reported position of SN 1181. Deep optical observations (above right) revealed a blast wave speeding through space at more than 2 million miles per hour, suggesting an origin in an explosion that happened about 1000 years ago. X-ray observations by the XMM-Newton X-ray telescope (middle, shown as contours superimposed on an infrared image) revealed a strong point-like source of X-rays from near the center of the nebula. This X-ray source is an unusual object, a rare, extremely hot, mass-losing star. Astronomers believe that this weird star is the result of the collision and merger of two white dwarf stars, which would have produced an unusual type of supernova. If so, then this would be the first recorded double-white-dwarf merger known in the Milky Way, and the only one whose remnants can be studied in detail.

A 900-year-old cosmic mystery surrounding the origins of a famous supernova first spotted over China in 1181 AD has finally been solved, according to an international team of astronomers.

New research published today (September 15, 2021) says that a faint, fast expanding cloud (or nebula), called Pa30, surrounding one of the hottest stars in the Milky Way, known as Parker's Star, fits the profile, location and age of the historic supernova.

There have only been five bright supernovae in the Milky Way in the last millennium (starting in 1006). Of these, the Chinese supernova, which is also known as the "Chinese Guest Star" of 1181 AD has remained a mystery. It was originally seen and documented by Chinese and Japanese astronomers in the 12th century who said it was as bright as the planet Saturn and remained visible for six months. They also recorded an approximate location in the sky of the sighting, but no confirmed remnant of the explosion has even been identified by modern astronomers. The other four supernovae are all now well known to modern day science and include the famous Crab nebula.

The source of this 12th century explosion remained a mystery until this latest discovery made by a team of international astronomers ... In the new paper, the astronomers found that the Pa 30 nebula is expanding at an extreme velocity of more than 1,100 km per second (at this speed, traveling from the Earth to the moon would take only five minutes). They use this velocity to derive an age at around 1,000 years, which would coincide with the events of 1181 AD. ...


The Remnant and Origin of the Historical Supernova 1181 AD ~ Andreas Ritter et al
Know the quiet place within your heart and touch the rainbow of possibility; be
alive to the gentle breeze of communication, and please stop being such a jerk. — Garrison Keillor
Top

https://en.wikipedia.org/wiki/Saladin wrote:
<<Saladin (1137 – 4 March 1193), was a Sunni Muslim Kurd. He became the first sultan of both Egypt and Syria, founding the Ayyubid dynasty. Saladin led the Muslim military campaign against the Crusader states in the Levant. At the height of his power, his sultanate spanned Egypt, Syria, the Jazira (Upper Mesopotamia), the Hejaz (western Arabia), Yemen, parts of western North Africa, and Nubia. On 11 May 1182, Saladin, along with half of the Egyptian Ayyubid army and numerous non-combatants, left Cairo for Syria. On the evening before he departed, he sat with his companions and the tutor of one of his sons quoted a line of poetry: "enjoy the scent of the ox-eye plant of Najd, for after this evening it will come no more." Saladin took this as an evil omen and he never saw Egypt again.>>