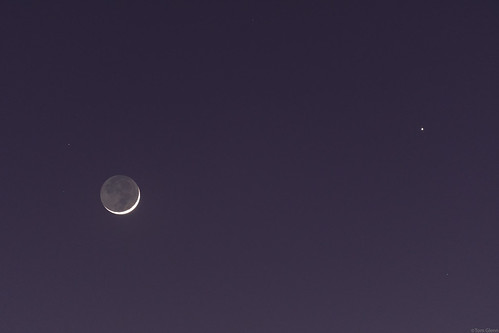 Young crescent Moon and Jupiter by Tom Glenn, on Flickr

This single shot photograph shows the young crescent Moon together with Jupiter on the evening of February 2, 2022. Five of the six largest moons of our solar system are visible (Ganymede, Callisto, Io, Moon, Europa). The Galilean moons of Jupiter are arranged as follows in this image, from top to bottom: Ganymede, Io, Europa, Callisto. Taken from San Diego, CA, on 2/2/22 at 18:10 PST.

The Flaming Star Nebula in SHO IC405 - The Flaming Star Nebula is an emission and reflection nebula located in the constellation Auriga 1.500 light years from earth. It's name comes from rippling dust and gas lanes derived from light reflecting off of dust granules from the nearby star AE Auriga.
I captured this image over 6 nights from my home terrace in Ragusa, Italy using Hydrogen, Oxygen and Sulfur narrowband filters, resulting in the famous Hubble palette.

Here is my ISS image from from my backyard telescope.
Thw scope was a costume fork mount with sct and a planetary camera.
It took me year to achieve such high res image, Alot of accuracy and tech.
It was a difficult target to capture.
https://www.astrobin.com/km71xl/
Thank you,
Michael Tzukran
You do not have the required permissions to view the files attached to this post.
Top 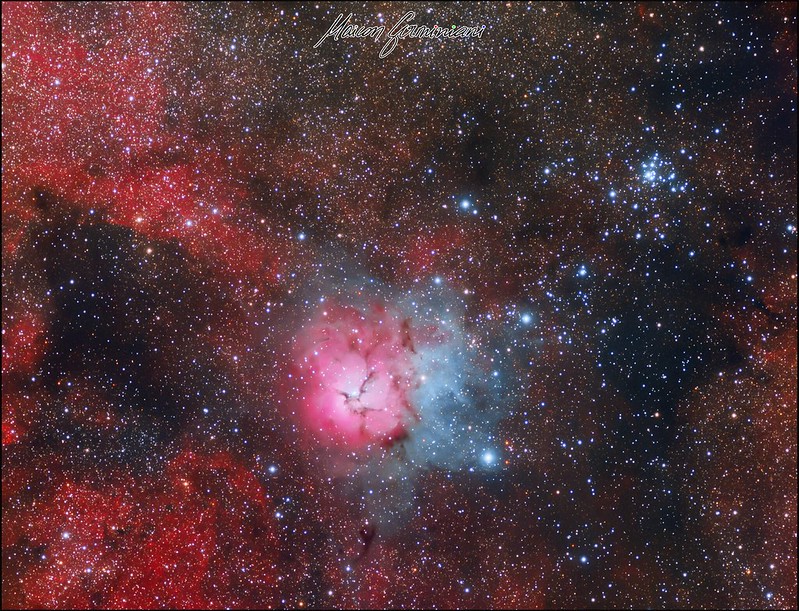 Widefield from the Cone Nebula to NGC 2259

Cone Nebula to NGC 2259 .jpg
Click on above to enlarge.

Full info @ https://www.kinchastro.com/cone-nebula-to-ngc-2259.html
You do not have the required permissions to view the files attached to this post.
Top 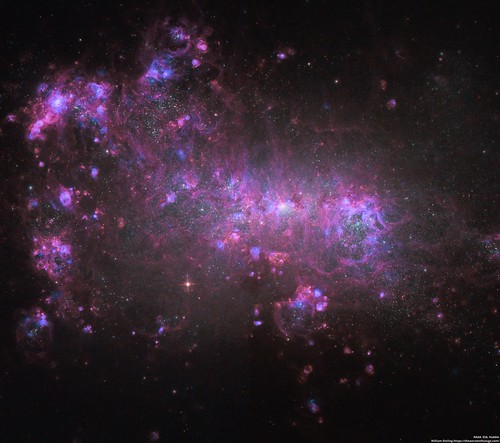 Stellar Fireworks in NGC 4449 by William Ostling, on Flickr

NGC 4449 has been forming stars for several billion years, but currently it is experiencing a star formation event at a much higher rate than in the past. At the current rate, the gas supply that feeds the stellar production would only last for another billion years or so. The hot, new young stars are illuminating the surrounding gas in a beautiful display. Pink regions represent ionized hydrogen gas, and blue regions represent ionized oxygen gas. Good evening everyone, Here I am again once again with the constellation of Orion, last week, the moon was almost absent, but still bad weather, so I decided to go back and forth in the cantal at 1350m altitude in order to be able to continue and complete the mosaic, approximately 800 km round trip! And it was freezing cold it wasn't easy 🥶🥶 Ciel bortle 3, it was really a magical place in order to be able to image this constellation made over 2 nights, in 4 photo panels of about 4 hours each image, so I'll let you go and see the full version so you can see all the details . Another big thank you and a big congratulations to @Philippe for his help with the treatment, which is working wonders as usual! Samyang 135mm f2.8 Canon 6D Iso 1600 defiltered by Photomax Heq5 pro Approximately 400 x 120'' Processing App, pixinsight, ps Have a good sky
Top

Inca astronomers referred to the Coalsack Nebula as "Yutu", a partridge-like bird native to the Andes. The two bright stars in the accompanying image belong to the Southern Cross: they are (lower-right) Acrux (Alpha Crucis) and (top-right) Mimosa (Beta Crucis). There are also several open star clusters visible here, including the wonderful Jewel Box to the left of Mimosa.

I captured this image remotely, using iTelescope T70 in the Rio Hurtado Valley, Chile (hence the reference to Yutu!). The total exposure time was 75 minutes through LRGB filters. 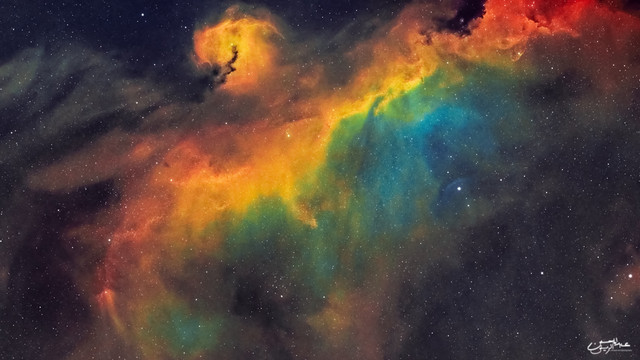 Another long time favourite target! the seagull nebula. I was originally planning to capture over 8 hours on the target, unfortunately i did not account for the humidity and dew point being reached so early in the night or morning i guess making my lens fog up completely. I had to discard about an hours worth of data and cut the night short. I came in at a total of about 5.5 hours which is still enough data to work with. Hopefully i can capture it again soon and make another 5 or 6 hours. Let me know what you think!

you can find more of my work on my instagram www.instagram.com/mi7sen89 or on astrobin
https://www.astrobin.com/users/mi7sen/ 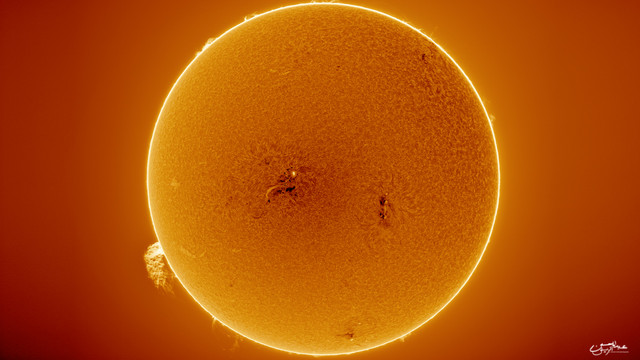 Stacked best 75% of both as guiding was optimal

Processed in impgg and PS


imaged from Kuwait this afternoon where seeing is not optimal. 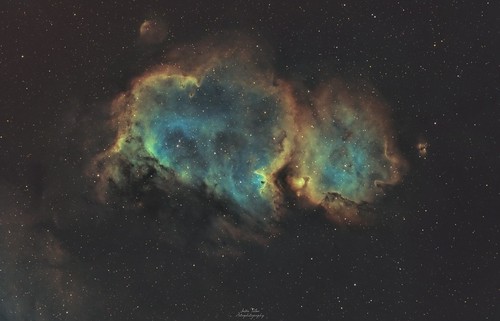 Westerhout 5, Aka IC1848 or the Soul Nebula
Here is the Soul in SHO palette, I had quite a lot of fun processing this data, this target is quite colorful on it's own, displaying very saturated hues just after channel combination. 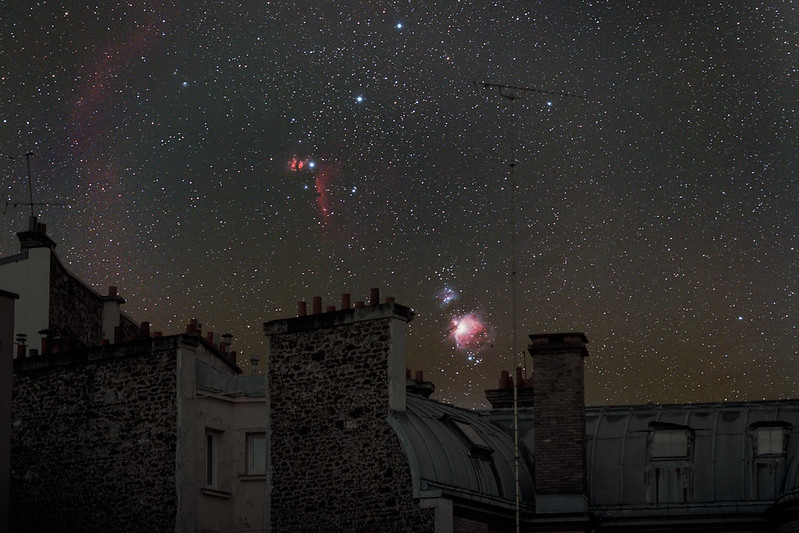 Orion is a real star of the winter night sky, its nebula is the brightest we can observe. It is so bright that you can easily see it with the eye (knowing where to look) under a sky without too much light pollution.

I live in the heart of Paris (somewhere in the 17th arrondissement) and I'm lucky to have a small balcony! I have been practicing astrophotography for a few years now and I know how much light pollution is a nightmare for photographing the night sky. The capital is certainly the place where there is the most light pollution in France... We can see some stars when the conditions are favorable but not more. But last month I discovered that I could see Orion's stars with the naked eye and that the constellation is just visible in the alignment of my balcony at night, at least at this time. In need of an astro outing under more clement skies, I had the idea to photograph it.

Trying to do astrophoto from a balcony in Paris is quickly problematic. First difficulty, the visibility. My balcony is south facing, which is great for sunbathing in underwear when the weather is good, but not so good for setting up with an equatorial mount. An equatorial mount is a tool that compensates for the rotation of the earth and allows you to take pictures of stars with a long exposure without them "moving". Indeed, it is impossible to see the North, (necessary to set up the polar star in order to adjust the equatorial mount), to aim up or on the sides because of the extension of the walls around the balcony. I only have a shooting window on the south. To remedy this problem I had to make very short exposures and recard my subject regularly to compensate for the rotation of the Earth

Second problem, the Eiffel tower ! At night it plays the role of a lighthouse and turns a powerful light beam 360 degrees from its top floor. I'm not near it but apparently enough to see this beam illuminating the part of the sky visible from my home. (According to the Eiffel Tower website, its beam has a range of 80km). I could have run the intervalometer without worrying about the light beam but it would have been very difficult to sort out the pictures afterwards... (on the raw you can't see the excess light, you have to edit it first to see it) Between each passage of the beam I had enough time to take 6 pictures. So I took 6 pictures, waited a few seconds, took 6 pictures again, forgot to count, took the beam by inattention, deleted the last picture with the beam, and started again...

Third problem, the proximity. A special dedication to the neighbor of the building opposite who must have taken me for a pervert with my camera pointed in her direction...

In total I took 390 pictures ! I also took a picture with the same lens of the foreground, the roofs of the buildings above which Orion rises.

I made a stacking of the sky photos (technique which consists in stacking the photos in order to have a final photo with a maximum exposure and much more detail), which made me a final photo of about 16min and 38 sec.

THE REFLECTION NEBULA VDB 130 IN HST

A beautiful emission nebula in the Sadr region.
The processing the reflection nebula vdB 130 was captured using narrowband filters Astrodon OIII,SII and Astronomik Ha.
I used a combination of two ASI 2600mono and Atik 460mono cameras for detail.
I used a total of 74 hours of exposure.

You can find a detailed description on my website: 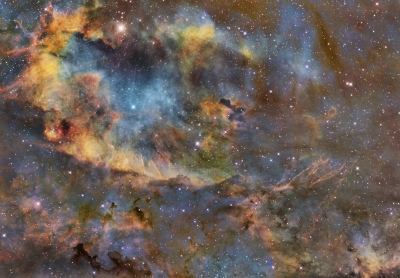 Aliens are watching us.

A cloud in the Bernese Alps shows as an UFO. 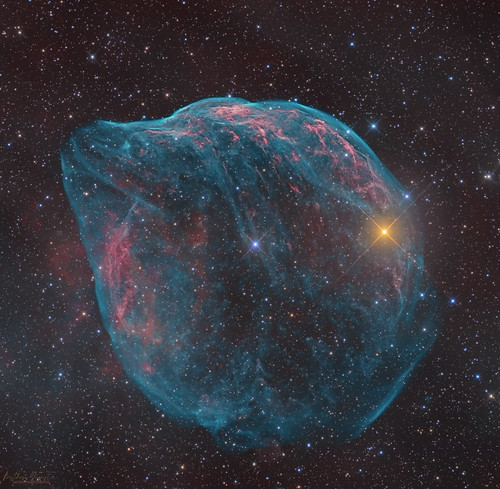 The great SH2-308 emission nebula lies about 5,200 light-years away in the constellation Canis Major.
It is a famous example of “space bubble” (like Thor's Helmet NGC 2359 or the Bubble nebula NGC 7635) created by the intense radiation of a bright and very hot Wolf-Rayet central star. Fast winds from this Wolf-Rayet create the bubble-shaped nebula as they sweep up slower moving material from an earlier phase of evolution.
The Dolphin Head covers slightly more of the sky than a Full Moon, which corresponds to a diameter of 60 light-years at its estimated distance.

Another faint bubble is visible at the bottom which is the planetary nebula PNG 234.9-09.7


Data bought on Telescope Live and taken with CHI-2 and CHI-4 telescopes at El Sauce Observatory in October and November 2021.
HOO-RGB processing made with Pixinsight and Photoshop. 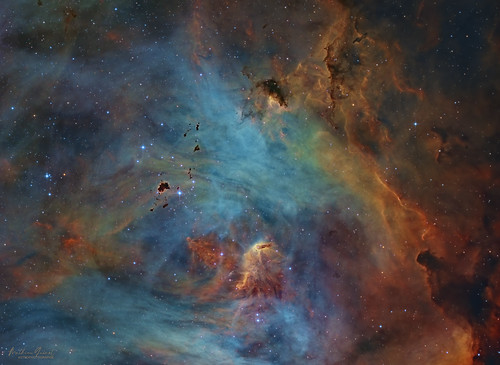 This is one of my favourites nebulae and i particulary love the great 3D appearance of its structures in narrowband, and the colours which came out from it.

Here is a close view of IC 2948, also known as the Running Chicken Nebula or the Lambda Centauri Nebula, which is an emission nebula located about 6000 light-years away in the constellation Centaurus.
It is associated with the open cluster IC 2944 (Caldwell 100) and one of its most remarkable features is the presence of several Bok globules, which are frequently a site of active star formation. However, no evidence for star formation has been found in any of the globules in IC 2948. 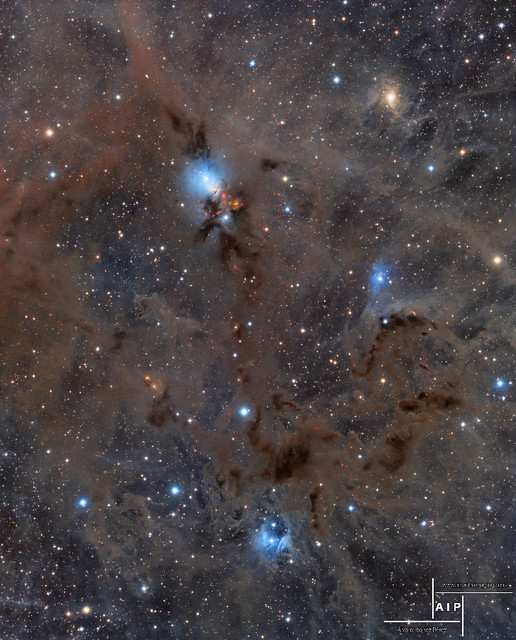 My 7 year project of a 2.5 gigapixel image in Orion. 200 panels plate solved and mosaiced to reveal this incredible constellation.

And a small version for the forum. 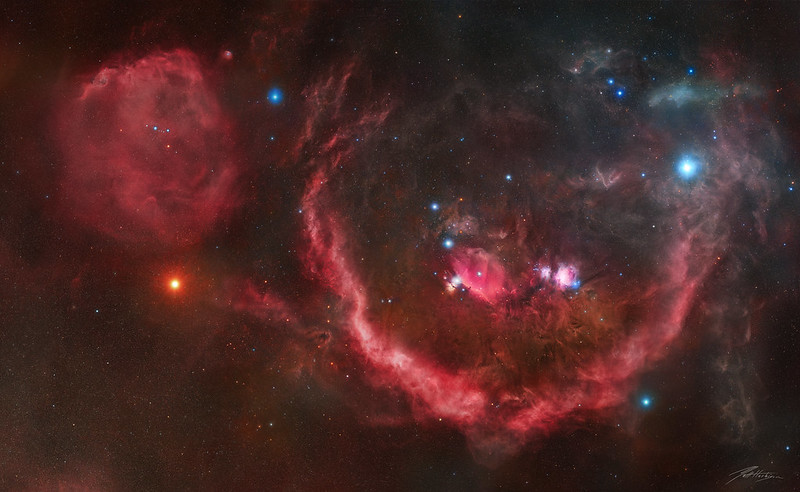 B33NGC2024-2022-TommasoStellaSKY.jpg
You do not have the required permissions to view the files attached to this post.
Top

Space station flyby
Photographed it with a small telescope on fork mount.
It was a clear night and the seeing was great, She was very bright -4.
https://www.instagram.com/your.daily.astro/
Michael
You do not have the required permissions to view the files attached to this post.
Top

Here we identify two clusters in the constellation of Norma, in the upper left corner is NGC 6067 and in the lower right is NGC 6031

I attached an APOD Submission, this image was captured last year during full moon over Temple 4 of Tikal National Park in Peten, Guatemala. UNESCO HERITAGE SITE and astronomical heritage of the world.

During this afternoon with amazing weather conditions, inside a tropical jungle, The Maya Biosphere, the full moon rises behind temple 1 (the Great Jaguar) and Temple 2 (The Skull's Temple) in an apparent alignment with the Full Moon rising trajectory, the image displays the colofull pallete of the Venus Belt and the color of light over the moon surface in the different layers of the atmosphere.

The maya biosphere is an important cultural and natural reserve plus a lot of astronomical observations happened in these sites.

Note: I kindly request to share the attached image in all platforms only if the image becomes APOD.

Thank you.
You do not have the required permissions to view the files attached to this post.
Sergio Emilio Montúfar Codoñer
pinceladasnocturnas.com
Top

Nick Pavelchak
You do not have the required permissions to view the files attached to this post.
Top
88 posts