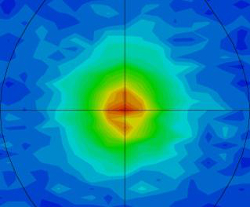 
What's going on inside the Sun? We have pretty complete ideas about what the interior of the Sun is like, painstakingly deduced by observations of the outside of the Sun: how far away it is (which tells us how big it is), how massive it is, and how hot it is. Using these properties, and the physics of atomic processes, Hans Bethe in 1938 worked out the solution to an ancient riddle, identifying the energy source by which the Sun and other stars shine. But deduction is one thing, direct observation another. Could anyone look directly into the nuclear furnace at the core of the Sun? Surprisingly, this is actually possible. The image above is an image of neutrinos directly emitted from the core of the Sun, obtained by the Super-Kamiokande neutrino telescope, located in Japan. Neutrinos are produced by the nuclear reactions in the Sun's core, and because neutrinos are very shy, only rarely interacting with matter, a neutrino produced in the core of the Sun can be seen only eight minutes later at earth - it passes through the Sun as if the whole Sun were invisible to it. By detecting these neutrinos we can get an instantanous read on the size, temperature and density of the Sun's nuclear furnace. Because neutrinos are so hard to catch, neutrino detectors need to be very large. Super-Kamiokande consists of a cylindrical tank, 128 feet in diameter by 136 feet high, filled with 55,000 tons of water. Neutrinos that interact with atoms in the water generate brief, tiny flashes of light which can be detected by light-sensitive sensors, 13,000 of which line the tank. Not only has Super-K been able to confirm our understanding of the interior of the Sun, it also has helped to resolve outstanding issues in sub-atomic physics, and showed that neutrinos can oscillate, changing from one form to another. Detection of such neutrino oscillations by Super-Kamiokande solved the "solar neutrino problem", explaining why earlier neutrino telescopes seemed to detect far fewer neutrinos from the Sun than the number predicted by standard models.

https://en.wikipedia.org/wiki/Standard_solar_model#Neutrino_production wrote:
<<The CNO cycle (for carbon–nitrogen–oxygen; sometimes called Bethe–Weizsäcker cycle after Hans Albrecht Bethe and Carl Friedrich von Weizsäcker) is one of the two known sets of fusion reactions by which stars convert hydrogen to helium, the other being the proton–proton chain reaction (p-p cycle), which is more efficient at the Sun's core temperature. The CNO cycle is hypothesized to be dominant in stars that are more than 1.3 times as massive as the Sun.

Most of the neutrinos produced in the Sun come from the first step of the pp chain but their energy is so low (<0.425 MeV) they are very difficult to detect. A rare side branch of the pp chain produces the "boron-8" neutrinos with a maximum energy of roughly 15 MeV, and these are the easiest neutrinos to detect[; e.g., the Kamiokande water Cerenkov detectors ONLY detect neutrinos above about 5MeV]. A very rare interaction in the pp chain produces the "hep" neutrinos, the highest energy neutrinos predicted to be produced by the Sun. They are predicted to have a maximum energy of about 18 MeV.>>