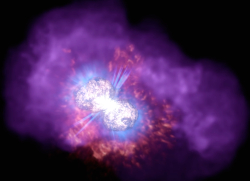 
Stars with more than about 10 times the mass of the Sun are ticking time bombs. They burn up their thermonuclear fuel in the blink of a cosmic eye (in only millions of years, not billions) and explode. The more massive the star, the shorter the star's fuse. What's the most dangerous star near earth? Many believe it's Eta Carinae, two gravitationally-bound stars with a total mass of more than 100 times the mass of the Sun, just 10,000 lightyears from earth. Eta Carinae is set to explode as a supernova in (we think) only a few million years, when it may bathe the earth in dangerous gamma rays. The star suffered a startling outburst in the mid-nineteenth century when it became the brightest star in the southern sky, only to fade to obscurity within decades. Many believed the star was destroyed by this explosion (which became known as the "Great Eruption"), but it was not destroyed. It now lies hidden behind a thick, expanding, double-lobed structure called the Homunculus, ejected during the Great Eruption. Studies of this ejected material provide forensic clues about the mysterious nature of this explosion. Using observations from NASA satellites we can now visualize the 3-D distribution of the shrapnel, all the way from the infrared, through optical and UV, to the outermost shell of million-degree material, visible only in X-rays. The image above shows a multiwavelength view of the far-side of this shrapnel, a view naturally hidden from our perspective, but revealed in this new, 3-D reconstruction. The purple haze represents the hot, million-degree X-ray emitting gas produced by fast moving bits of shrapnel hitting slow moving, outer material, as imaged by the Chandra X-ray Observatory. Inside this hot gas, cooler hydrogen gas and dust appears to glow red, as seen by the Spitzer Space Telescope. The Homunculus nebula itself is the dusty bipolar structure inside the glowing hydrogen gas, best detailed by the Hubble Space Telescope. Eta Car, the binary star that started it all, is hidden deep within the Homunculus, near where the lobes meet. But ultraviolet light from this hot, hidden binary star leaks out through gaps in the walls of the Homunculus, giving us clues to the true nature of these two unstable stars.