M16-2022-TommasoStellaWEB.jpg
You do not have the required permissions to view the files attached to this post.
Top 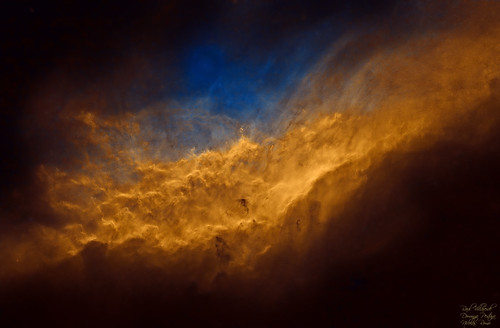 With the Julian skies still a bit unsteady with variable clouds, I decided to swap the FLI PL16803 CCD with the ASI6200MM Pro CMOS. The latter allows me to move from 15 minute to 1 minute subs to help find "holes" to the universe.

"Copeland’s Septet is a group of interacting galaxies located in the constellation Leo.The group was named after British astronomer Ralph Copeland, who discovered it in April 1874. It lies at an approximate distance of 400 million light years from Earth."

https://www.astrobin.com/a0st7u/
You do not have the required permissions to view the files attached to this post.
Top

Ctb1 Abell 85. A supernova remmant, 57 h exp time in HOO palette. It's size in the sky is similar to the size of a full moon. It's outer shell has ruptured between the 4 and 5 o'clock position. Originally this was thought to be a Planetary nebula (Abell 85) but in 1971 it was determined that is actually a supernova remmant. 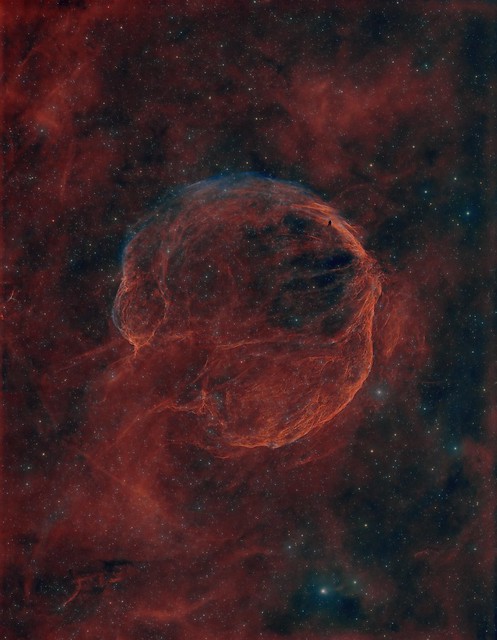 While capturing 1 minute L subs for Copeland's Septet Thursday evening, seeing started to deteriorate to > 2.5" around midnight. Clouds were forecast for Friday evening, so I figured I'd collect some RGB for a bright and high galaxy. M106 looked like the perfect choice.

I intended to come back and collect more RGB and L next month, but Friday evening turned out to be very special. High thin clouds were moving in around 8 PM as forecast. Not knowing exactly what might happen, I decided to capture 1-minute L subs for M106.

As I've seen before, high thin clouds usually equate to excellent seeing, and that was indeed the case! I kept shooting L subs all night. I was amazed to be able to capture 265 1-minute subs between 1.2" and 2.2" !!! Many were a bit dim behind the wispy clouds, but the vast majority were clear. (-:

What you see here is only 50-minutes of each RGB channel (5-minute subs) with 180 of the lowest FWHM 1-minute L subs (3 hours) having an average FMHW of 1.8". This reduced to 1.3" after deconvolution.

My reference images was https://apod.nasa.gov/apod/ap190317.html

"A swirling disk of stars and gas, M106's appearance is dominated by blue spiral arms and red dust lanes near the nucleus. The core of M106 glows brightly in radio waves and X-rays where twin jets have been found running the length of the galaxy. An unusual central glow makes M106 one of the closest examples of the Seyfert class of galaxies, where vast amounts of glowing gas are thought to be falling into a central massive black hole. M106, a relatively close 23.5 million light years away, spans 60 thousand light years across."

https://www.astrobin.com/ky5r3g/
You do not have the required permissions to view the files attached to this post.
Top 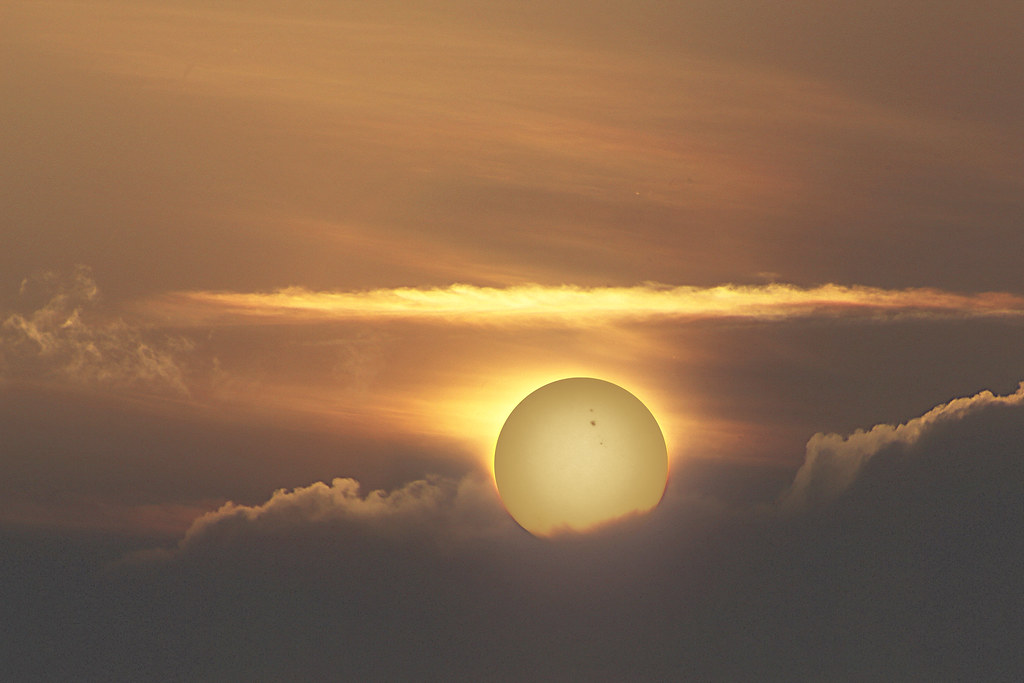 Kronberger 131 (Kn131) is a very faint and mysterious planetary nebula in the constellation Auriga. It measures about 4x3 arcmin in size. Kn 131 also goes by the designation PN G162.9-01.6. Kn 131 is a bipolar planetary and has faint long wing like extensions on one side and smaller appendages on the other side. The main body has stronger HII emission in the center and faint OIII emission on the outside. Some very faint HII emission is to the east and west of the object. This planetary nebula is ridiculously obscure with no other images I could find of it. The image is a crop of the area around the PN and is the result of 44.25hrs of exposure time through RGB Ha and OIII filters.

You can see a larger field of view and image details here: http://www.starscapeimaging.com/Kn131/Kn131.html 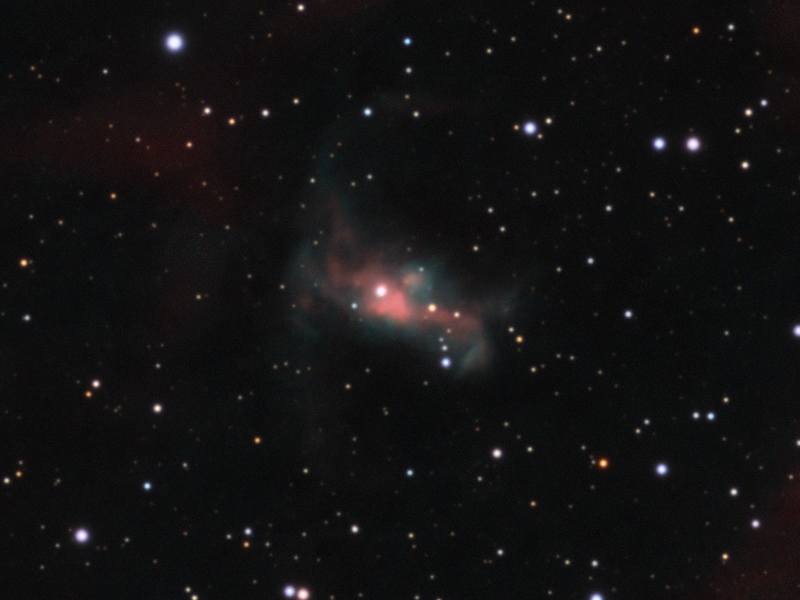 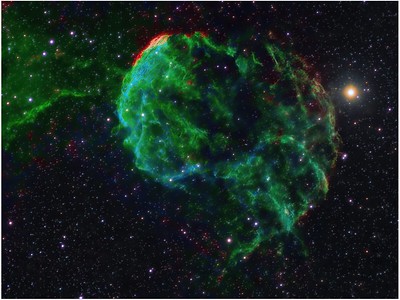 The Jellyfish Nebula ( IC 433, Sh2-248 ) is a supernova remnant located about 5,000 light years from Earth in the constellation of Gemini. It has an angular diameter of 50 arcmin which is about 1.7 full Moon widths. The SNR is abundant in SII (red), Ha (green) and OIII (blue) emissions.
Full resolution at:
Flickr
Astrobin 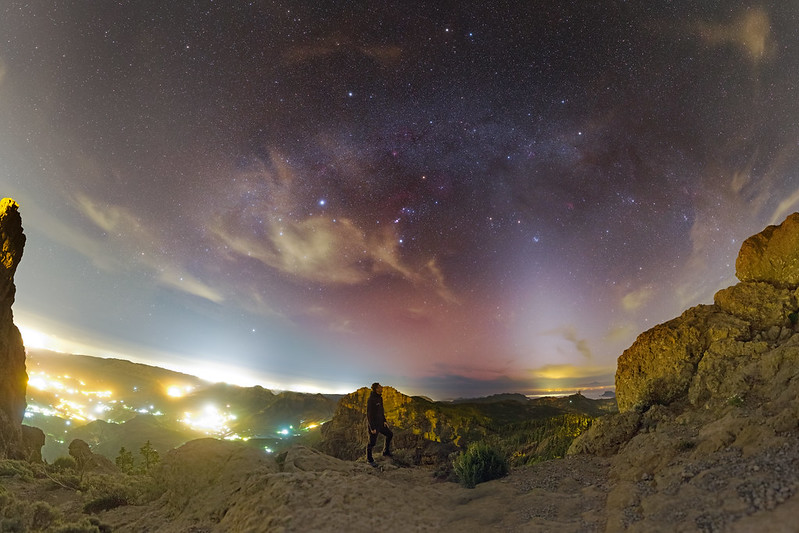 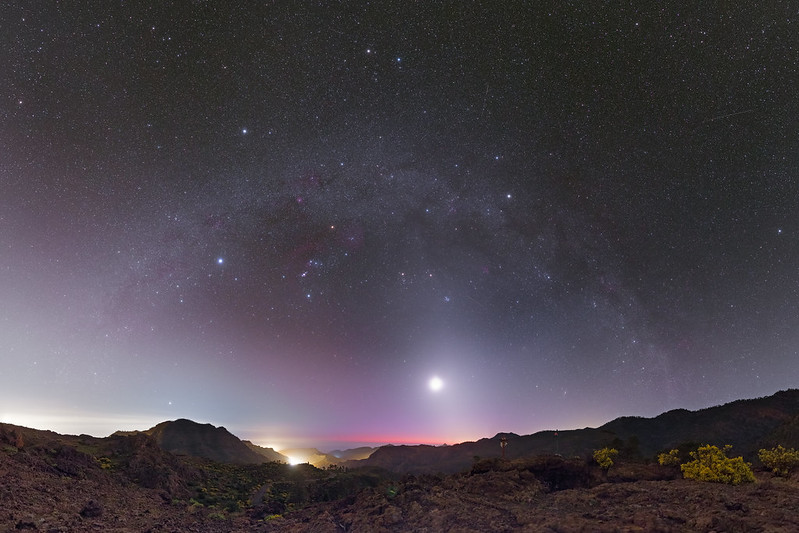 Winter hexagon is an asterism (not a constellation) of the brightest stars which are visible during winter (Rigel, Aldebaran, Capella, Pollux, Procyon and Sirius). Thanks to this asterism you might be able to find some constellations like Orion, Cannis Major, Taurus, etc.
In this picture which was taken in Gran Canaria you can find this asterism, zodiacal light, red airglow and waxing crescent.
Panorama made of 52 single shots with exposure time 13 seconds each at ISO 8000. I used Canon EOS 6D (Baader mod) with Sigma Art 24mm f/1.4@2.5.
Top 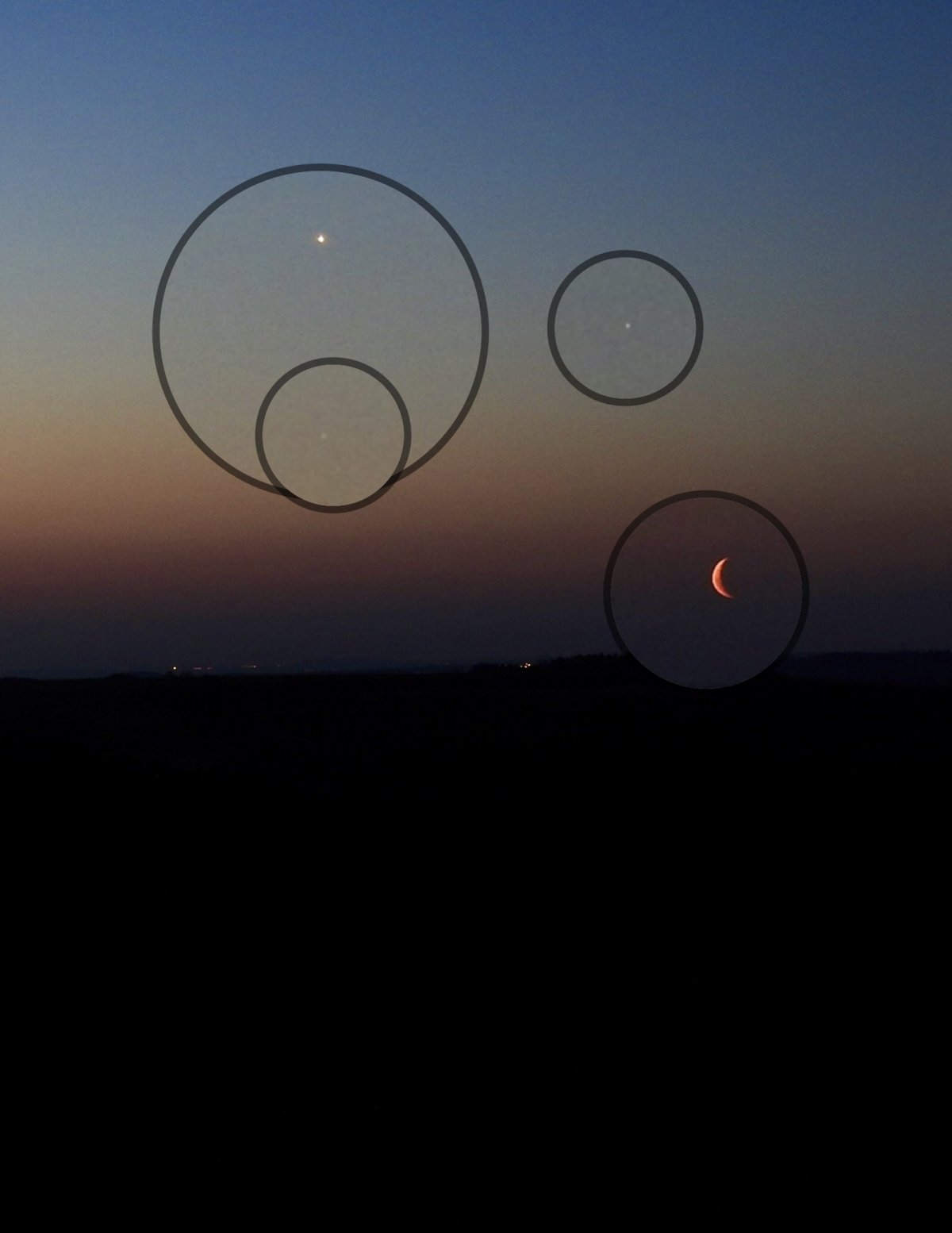 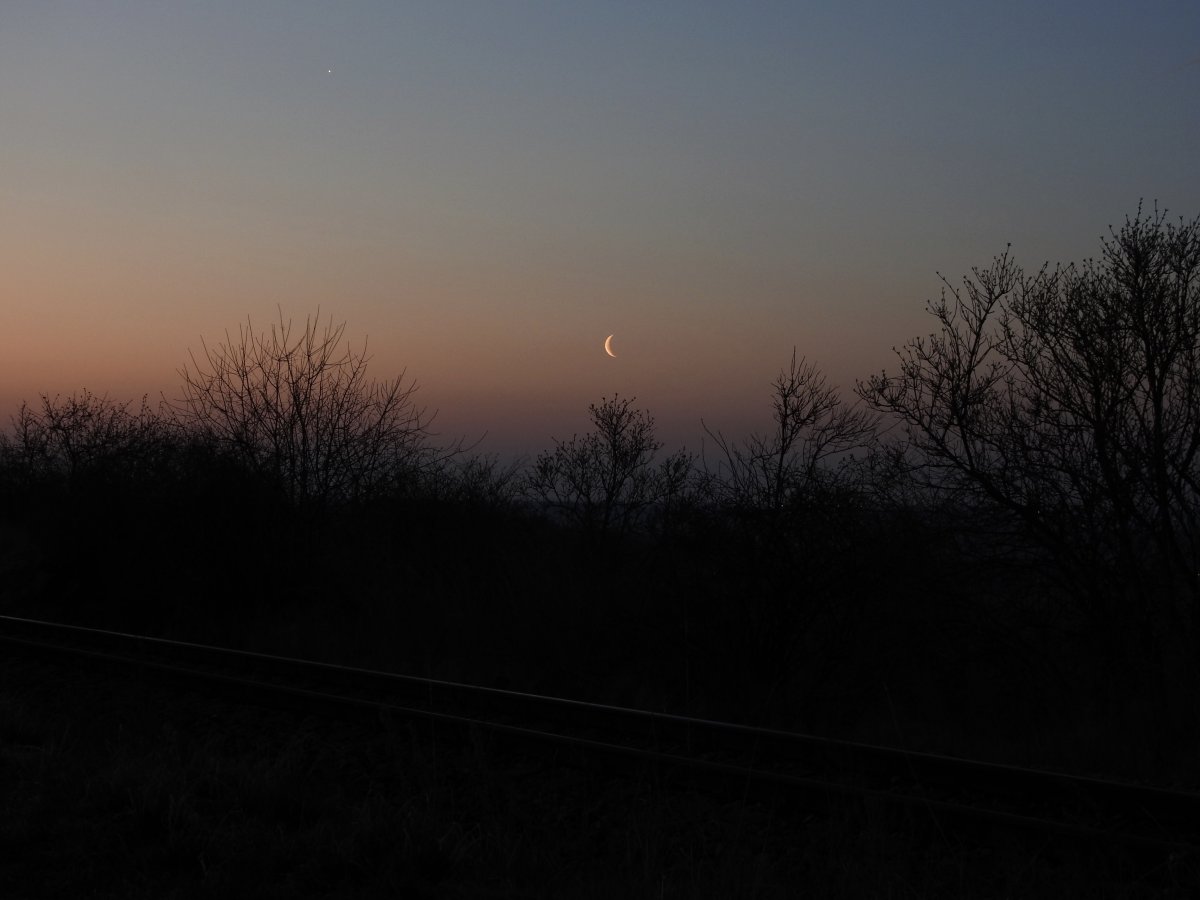 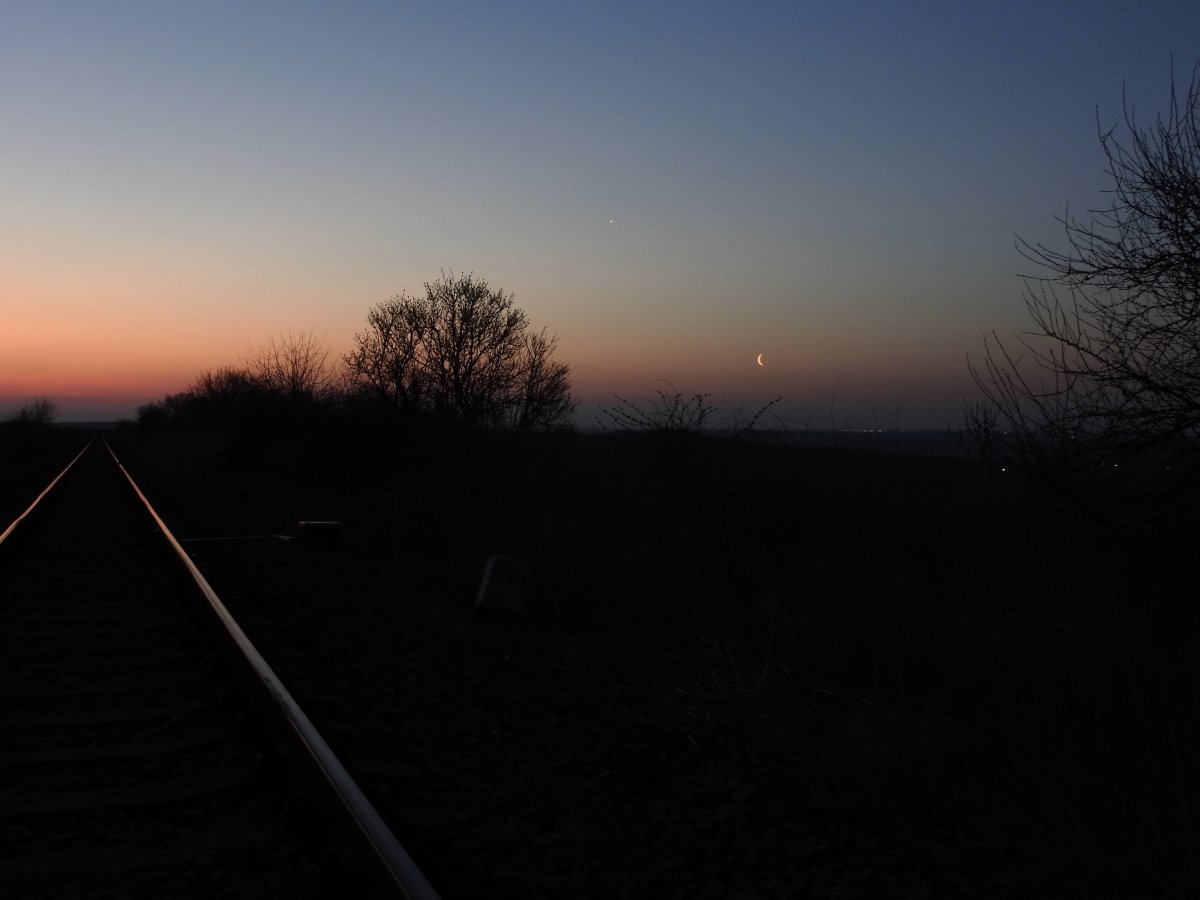 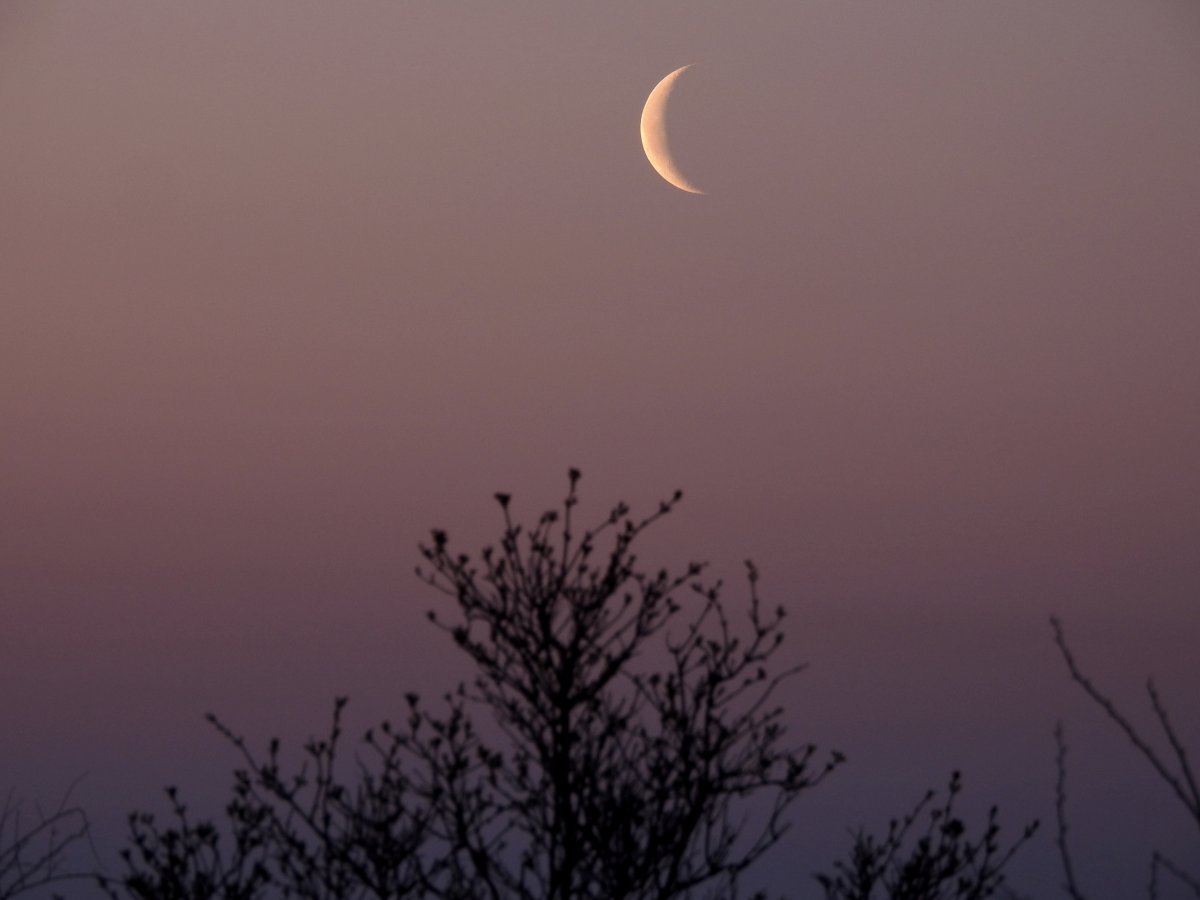 Hello, As summer slowly comes from around the corner imaging the sun becomes more and more difficult in Kuwait as temperatures can reach up to 50*C so my last few weeks of solar astrophotography are coming to a close!

This was image was taken using a Lunt LS100MT day and night telescope with a televue 2.5x Barlow and an ASI 174mm planetary camera.

The image is composed of 4000 frames of which only 25% has been stacked using AS!3 and processed using IMPGG and Photoshop. 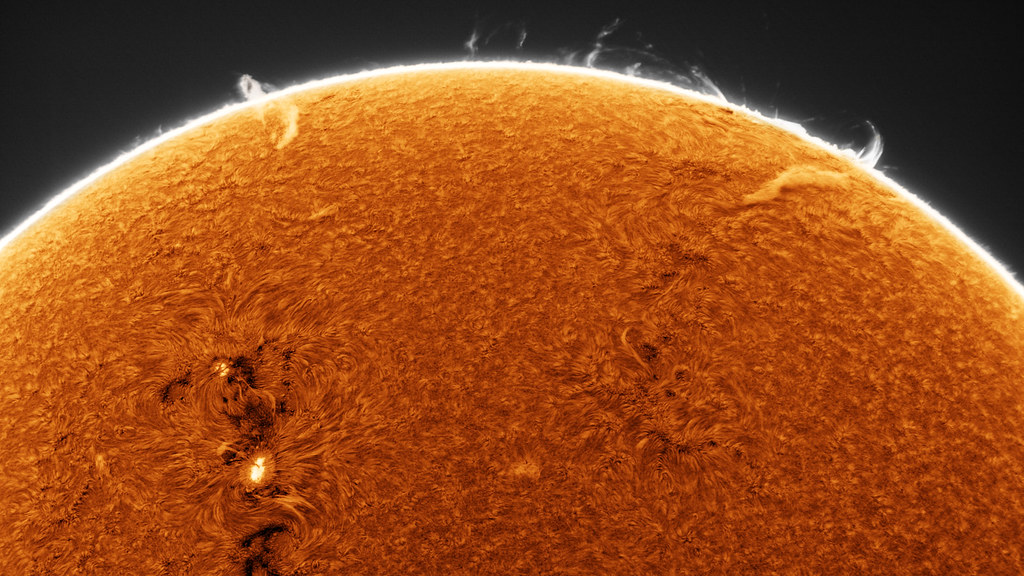 Thank you and clear nights and days!

Németh, Róbert
Hungary
You do not have the required permissions to view the files attached to this post.
Top 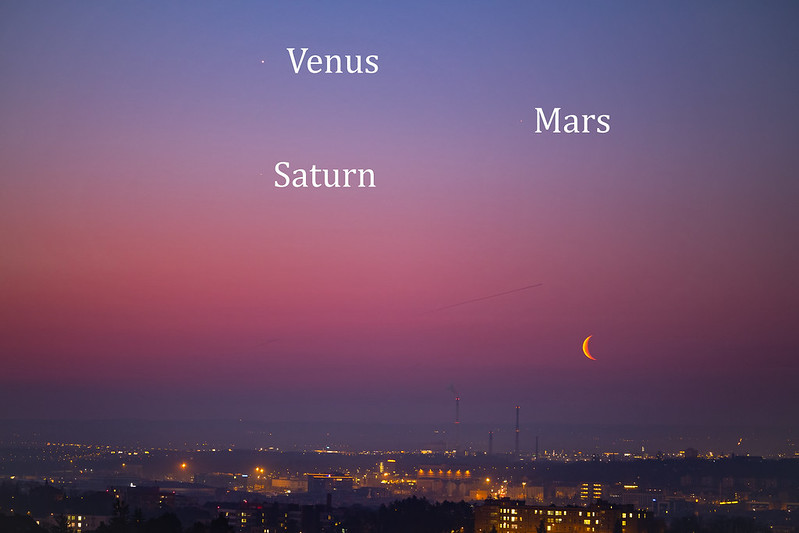 A beautiful view brought us Monday morning. Rendez-vous of Venus, Mars, Saturn and Moon had started a beautiful day with almost summer temperatures. Such a memorable day!
Top

"like a mote of dust in the morning sky"

Starless image of the area around Markarian’s Chain.

This image of a small portion of the Virgo Constellation was created using a 385mm telescope and a 26mp camera.  The shoot was broken down into a 10 pane mosaic.  Each pane was shot 31 times at an exposure of 300 seconds from my backyard with a ZWO ASI2600MC camera, William Optics GT81 telescope, and Losmandy GM811G equatorial mount.  Taken over several nights throughout last week.

All combined the total integration time of the final image was 25.83 hours. In post processing all the individual stars were removed then the resulting 229mp image was cropped almost in half and reduced to a postable size.  In this reduced size copy every speck represents a discernible galaxy in the full size version.


220327 Virgo_Galaxies 1080.jpg
You do not have the required permissions to view the files attached to this post.
Top

Shooting took place on February 2022 in Taranto (Italy) at about 80m above sea level.

Two Spacewalkers Imaged From The Ground

During the spacewalk of the two astronauts Raja Chari and Matthias Maurer the International Space Station appeared shortly after sunset in the bright evening sky over Germany.
This image of the ISS pass was taken on March 23, 2022 under good seeing conditions through my C11 EdgeHD telescope from the hometown of ESA #astronaut Dr. Matthias Maurer. The docked SpaceX Dragon capsule, with which the astronauts of Crew-3 flew to the ISS, is clearly visible.

Three years ago I got to know Matthias Maurer at our SpaceStudio Weltraum-Atelier in Nohfelden, Germany which is located near to Matthias‘ hometown. Additional funfact: I produced the song for his ISS mission, "Cosmic Kiss”: https://youtu.be/tQYysJw7W_s

For the local press in Germany, I first published an initial photo highlighting where Matthias Maurer appeared on the ISS. Due to my time constraints, I released this version right away on the internet, which then went viral, while I continued to work on the final image version with both highlighted astronauts.

Already two days after the spacewalk happened, Philip Smith contacted me. He is a world well-known photographer of all things ISS and has been published in many forms of media. Philip Smith with his ISS obsession, noticed on my picture that NASA astronaut Raja Chari is also detectable - on the robot arm “Canadarm2” - and he created a wonderful combination picture shown here with an insert from the #NASA livestream: https://youtu.be/uZqaTsbDcgU
I feel like I just made a once in a life time historic image

It's probably the first ground based image showing two spacewalkers on the ISS at the same time.


HaleBopp_April1_1997.jpg
HaleBopp50mm_deep_April2_1997.jpg
Back then I used fully mechanical analog cameras and developed the films directly in the bathroom of the alpine Hotel.

Dr. Sebastian Voltmer / www.voltmer.photo
You do not have the required permissions to view the files attached to this post.
Top

The small town below the clouds is Sion in the Rhône Valley.

This is the Hickson 44 galaxy group region in Leo. It is a 10-hour image captured without a filter. I carefully removed all of the stars and starlight artifacts by hand in Photoshop while preserving everything that was fuzzy or out-of-round. Lots of galaxies!

The small image here doesn't reveal all of the faint fuzzies so go to ABin for larger images and info.
https://www.astrobin.com/q3ez6z/

I hope you enjoy!
Nick Pavelchak
You do not have the required permissions to view the files attached to this post.
Top

Huge prominence off of our gorgeous star! I may be incorrect but i believe this is the result of an X-class flare or the flare itself. While i had wished to get a full solar disc image with the prom showing, unfortunately i had trouble pulling the data out without causing too much noise and artefacts showing up. However, i am very pleased with this outcome and i hope you find it as amazing as i do.

The image was taken from Kuwait City in the Middle East using a Lunt LS100MT, 2.5x televue barlow, and an ASI 174mm. The image consists of 4000 frames in which of those i stacked 20% and processed in IMPGG and Photoshop.

Thank you and clear skies! 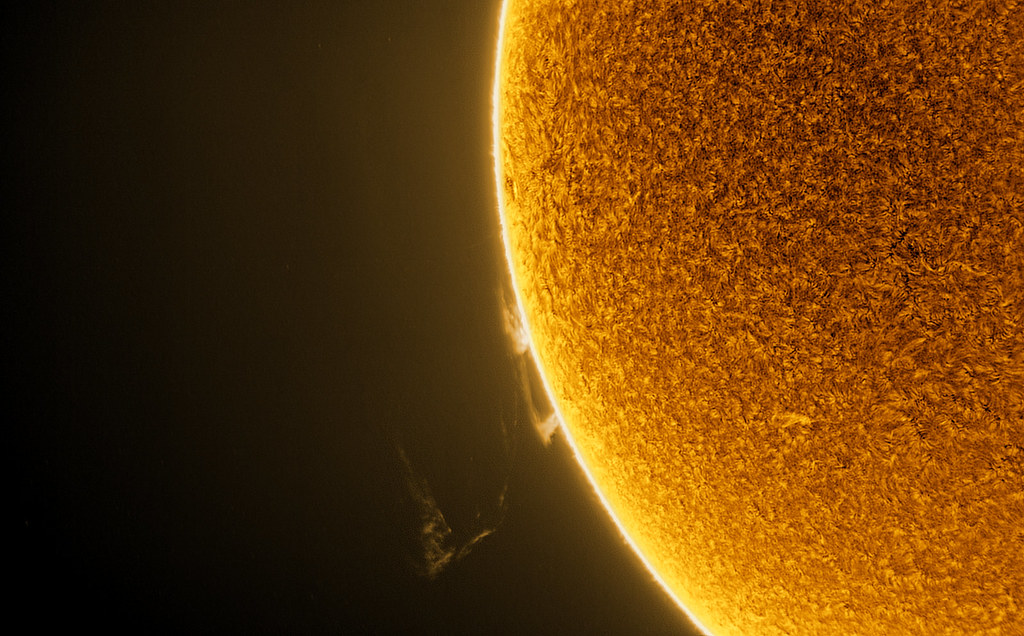