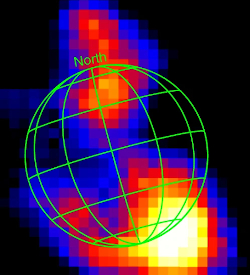 
The northern and southern lights, the aurorae, are produced by charged particles (electrons, protons and other positively-charged atoms) trapped by the magnetic field of a planet. Spinning planets generate magnetic fields because of organized electric currents in their interior, producing a natural electrical dynamo, which generates lines of magnetic force emanating from the "north" to the "south". On earth, aurorae are produced when charged particles from the Sun get trapped by the earth's magnetic field and spiral down near the poles. Other planets have magnetic fields and aurorae too. The planet with the largest magnetic field is Jupiter, so you might expect beautiful auroral displays - and you wouldn't be disappointed. On Jupiter, the charged particles which produce aurorae come from Jupiter's moon Io, a small body close to Jupiter. Io is the most volcanically active body in the solar system, because it's constantly pulled and pushed by Jupiter's strong gravity. Volcanic eruptions from Io spray hot molten rock and gas into space. Some of this electrically-charged gas is trapped by Jupiter's magnetic fields, and produce the Jovian aurorae. A new observation, shown above, by the NuSTAR high energy X-ray satellite, has recently detected the highest energy emission seen from Jupiter's aurora (or from any other planet aside from earth, for that matter). In the image the circle labelled "NuSTAR PSF" represents the NuSTAR point-spread function, an approximation of the small structure NuSTAR can see on Jupiter. These NuSTAR observations help solve a decades-old mystery left behind by the Juno spacecraft in orbit around Jupiter concerning how, exactly, the X-ray emission from the Jovian aurorae are produced. These NuSTAR observations suggest that similar auroral processes actually operate on Jupiter and earth - and maybe Saturn, too.


The planet’s auroras are known to produce low-energy X-ray light. A new study finally reveals higher-frequency X-rays and explains why they eluded another mission 30 years ago. 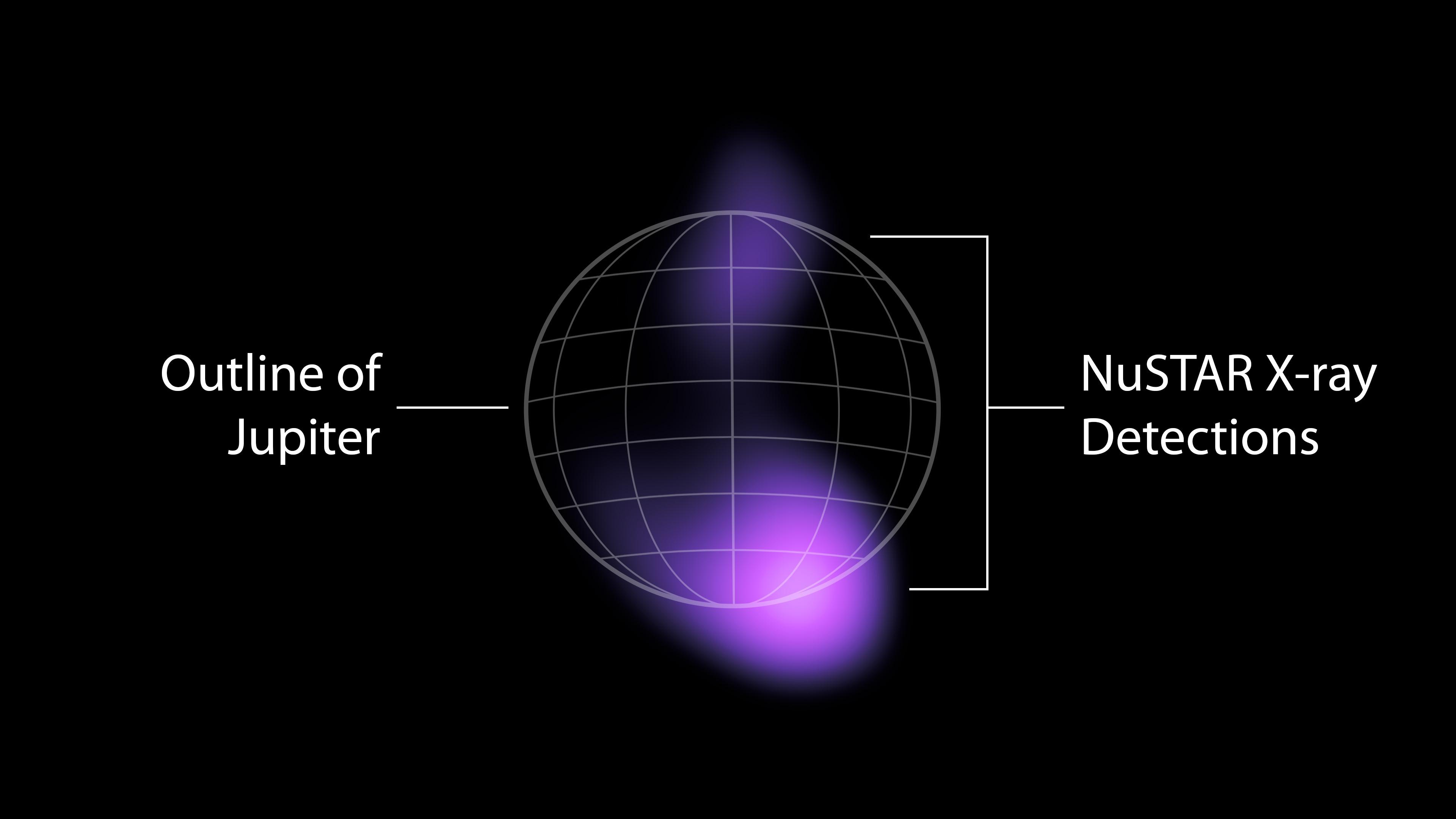 NuSTAR detected high-energy X-rays from the auroras near Jupiter’s north and south poles. NuSTAR cannot locate the source of the light with high precision, but can only find that the light is coming from somewhere in the purple-colored regions. Credit: NASA/JPL-Caltech/NuSTAR

Scientists have been studying Jupiter up close since the 1970s, but the gas giant is still full of mysteries. New observations by NASA’s NuSTAR space observatory have revealed the highest-energy light ever detected from Jupiter. The light, in the form of X-rays that NuSTAR can detect, is also the highest-energy light ever detected from a solar system planet other than Earth. A paper in the journal Nature Astronomy reports the finding and solves a decades-old mystery: Why the Ulysses mission saw no X-rays when it flew past Jupiter in 1992.

X-rays are a form of light, but with much higher energies and shorter wavelengths than the visible light human eyes can see. NASA’s Chandra X-ray Observatory and the ESA's XMM-Newton observatory have both studied low-energy X-rays from Jupiter’s auroras – light shows near the planet’s north and south poles that are produced when volcanoes on Jupiter’s moon Io shower the planet with ions (atoms stripped of their electrons). Jupiter’s powerful magnetic field accelerates these particles and funnels them toward the planet’s poles, where they collide with its atmosphere and release energy in the form of light.

Electrons from Io are also accelerated by the planet’s magnetic field, according to observations by NASA’s Juno spacecraft, which arrived at Jupiter in 2016. Researchers suspected that those particles should produce even higher-energy X-rays than what Chandra and XMM-Newton observed, and NuSTAR (short for Nuclear Spectroscopic Telescope Array) is the first observatory to confirm that hypothesis. ...


Observation and origin of non-thermal hard X-rays from Jupiter ~ Kaya Mori et al
Know the quiet place within your heart and touch the rainbow of possibility; be
alive to the gentle breeze of communication, and please stop being such a jerk. — Garrison Keillor
Top
2 posts • Page 1 of 1