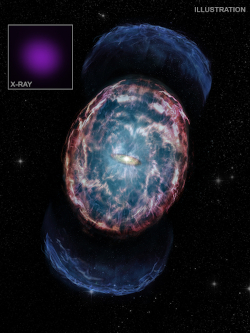 
A gravitational wave event on August 17, 2017 detected nearly simultaneously with a Gamma-ray burst showed, for the very first time, the merger of two tiny neutron stars, generating multi-messenger radiation due to the acceleration of massive particles (predicted by Einstein) and the acceleration of electrically-charged particles (predicted by Maxwell). This event was a golden opportunity to see what happens when incredibly dense objects like neutron stars collide. The story of how followup observations by the One-Meter, Two-Hemisphere team found an optical transient in a unobtrusive galaxy known as NGC 4993 is now a classic story of astronomical discovery. Pinpointing the site of the neutron star merger allowed followup observations throughout the electromagnetic spectrum, including important X-ray studies using the Chandra X-ray Observatory and other facilities. These followup observations have given astrophysicists a detailed picture of what occurs when two neutron stars slam into each other. The illustration above shows one model of the ejected remnants of the explosion, with an inner accretion disk surrounding a possible newborn black hole at the site of the merger. In the intervening years, this event has been the only one detected in both gravitational and electromagnetic radiation. So what's happened since? Although the source's gravitational radiation has long since faded, and the source is undetectable in most electromagnetic bands, the hot X-ray emission from the afterglow of the explosion can still be seen, but only the Chandra X-ray Observatory is powerful enough to still see it. The inset image above shows a recent image of the X-ray afterglow from Chandra. The X-ray data suggest that the shock produced by the merger has broken out and is now slamming into the galactic gas and dust surrounding the former binary system. The outer glowing arcs illustrate the charged particle jet believed to have initially formed when the two neutron stars merged.

GW170817: The Unfolding Story of a Kilonova Told in X-rays 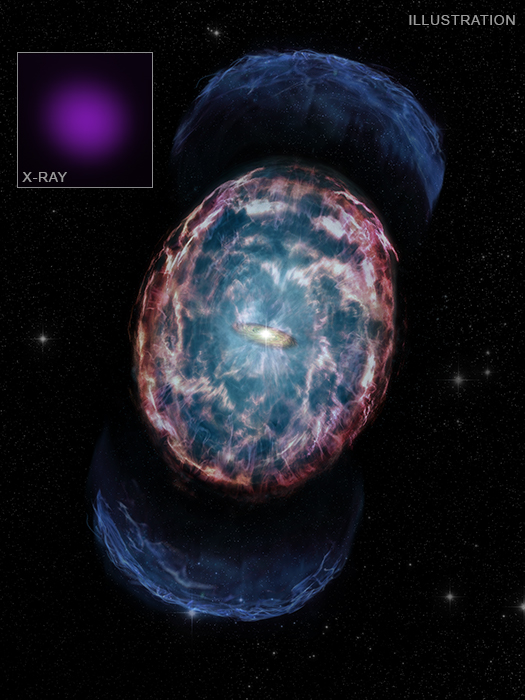 An artist’s conception illustrates the aftermath of a "kilonova," a powerful event that happens when two neutron stars merge. As described in our press release, NASA’s Chandra X-ray Observatory has been collecting data on the kilonova associated with GW170817 since shortly after it was first detected in gravitational waves by the Laser Interferometry Gravitational-wave Observatory (LIGO) and Virgo on August 17, 2017.

GW170817 was the first — and thus far the only — cosmic event where both gravitational waves and electromagnetic radiation, or light, were detected. This combination provides scientists with critical information about the physics of neutron star mergers and related phenomena, using observations at many different parts of the electromagnetic spectrum. Chandra is the only observatory still able to detect light from this extraordinary cosmic collision more than four years after the original event.

Astronomers think that after neutron stars merge, the debris generates visible and infrared light from the decay of radioactive elements like platinum and gold formed in the debris from the merger. This burst of light is called a kilonova. Indeed, visible light and infrared emission were detected from GW170817 several hours after the gravitational waves.

Initially the neutron star merger likely produced a jet of high-energy particles that was not pointed directly at Earth, explaining an initial lack of X-rays seen by Chandra. The jet then slowed down and widened upon impact with surrounding gas and dust. These changes caused an increase in X-rays observed by Chandra followed by a decline in early 2018. However, since the end of 2020, the X-rays detected by Chandra have remained at a nearly constant level. The Chandra image from data taken in December 2020 and January 2021 shows X-ray emission from GW170817 and from the center of its host galaxy, NGC 4993.


Evidence for X-Ray Emission in Excess to the Jet-afterglow Decay 3.5 yr after
the Binary Neutron Star Merger GW 170817: A New Emission Component ~ A. Hajela et al
viewtopic.php?t=37665
Know the quiet place within your heart and touch the rainbow of possibility; be
alive to the gentle breeze of communication, and please stop being such a jerk. — Garrison Keillor
Top
2 posts • Page 1 of 1