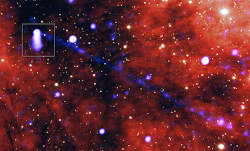 
It seems obvious to state that the visible Universe is composed of matter. But the existence of the matter Universe is a mystery. We don't really know why electrons have a negative electrical charge and protons are positively charged. An anti-matter Universe, in which electrons are positively charged and protons negatively charged, anti-galaxies composed of anti-stars, seems equally likely. In fact, we don't really know why the Universe contains any matter at all, since the Big Bang should have produced exactly equal amounts of matter and anti-matter. Since the collision of matter and anti-matter converts the matter energy back to radiation (a process called annihilation) this should leave behind a Universe filled with nothing but radiation, devoid of matter. Even though we currently live in a Universe dominated by matter, anti-matter is sprinkled through the Galaxy and beyond. Because anti-matter should quickly annihilate with matter, the anti-matter we observe must be produced somehow. Anti-matter can be created from high energy radiation and high energy particle collisions, of the type we see on earth in atom smashers like the Large Hadron Collider. Rotating neutron stars, or pulsars, can also create observable amounts of anti-matter, but most of this anti-matter is trapped by the pulsar's strong magnetic field. But maybe not always. The image above shows two views of an X-ray and optical image of a pulsar called PSR J2030+4415, located about 1600 lightyears from earth. The X-ray image, from the Chandra X-ray Observatory, is shown in shades of blue-white, superimposed on the optical image. The image on the right shows a close up of the pulsar, moving towards the top of the image at about 1 million miles per hour, and trailing behind a wake of charged particles which glows in X-rays. The leftmost image shows a wider view in which a linear X-ray emitting "filament", composed of fast-moving charged particles of matter and anti-matter, extends from the pulsar for about 1 trillion miles into space. The collision of the pulsar's magnetic field with the nearby magnetic field of the Galaxy close to the pulsar is thought to form a magnetic "nozzle", though which matter and anti-matter leak from the pulsar into space. These types of magnetic leaks could help explain the long-standing puzzle of how anti-matter is distributed through the Galaxy.

This image from NASA's Chandra X-ray Observatory and ground-based optical telescopes shows an extremely long beam, or filament, of matter and antimatter extending from a relatively tiny pulsar, as reported in our latest press release. With its tremendous scale, this beam may help explain the surprisingly large numbers of positrons, the antimatter counterparts to electrons, scientists have detected throughout the Milky Way galaxy.

The panel on the left displays about one third the length of the beam from the pulsar known as PSR J2030+4415 (J2030 for short), which is located about 1,600 light years from Earth. J2030 is a dense, city-sized object that formed from the collapse of a massive star and currently spins about three times per second. X-rays from Chandra (blue) show where particles flowing from the pulsar along magnetic field lines are moving at about a third the speed of light. A close-up view of the pulsar in the right panel shows the X-rays created by particles flying around the pulsar itself. As the pulsar moves through space at about a million miles an hour, some of these particles escape and create the long filament. In both panels, optical light data from the Gemini telescope on Mauna Kea in Hawaii have been used and appear red, brown, and black. The full length of the filament is shown in a separate image. ...


The Long Filament of PSR J2030+4415 ~ Martijn de Vries, Roger W. Romani
Know the quiet place within your heart and touch the rainbow of possibility; be
alive to the gentle breeze of communication, and please stop being such a jerk. — Garrison Keillor
Top
2 posts • Page 1 of 1