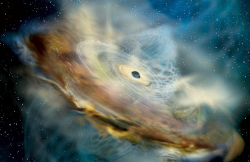 
Black holes are all about gravity, since gravity gives them there unusual properties. The "No-Hair" theorem says that the only information we can obtain about the state of things within a black hole's event horizon is the mass of the stuff, how fast it's spinning, and whether the stuff has any electric charge. Most people believe black holes have no electric charge. It would be hard to compress charged particles like bare protons or electrons to high enough density to form a black hole, since the electric repulsion of one electron for another, or one protron for another, is vastly stronger than their gravitational attraction. Even if a few electrons happened to wander through the event horizon, an electrically charged black hole would quickly would attract and accrete oppositely charged particles, resulting in zero net charge. Beyond the event horizon, things can be more complicated (and interesting). Material falling into a black hole, either from an unfortunate nearby star, or some nearby cloud of gas and dust, forms a thin disk as it spirals into the black hole. This material is hot, and electrons get knocked off their atomic nuclei. This electrically-charged, spiraling gas produces a fairly strong magnetic field which can play an important role in mediating the motion of the gas, even allowing some happy gas particles to escape the black hole by forming a narrow beam - or jet - shooting off the accretion disk. This is an example of the dynamo effect in action, the same effect that creates the magnetic field of the earth and the Sun. Instabilities in flow of charged particles can cause the magnetic field to reverse polarity. This happens on earth, where the south magnetic pole becomes the north pole, and vice-versa, but infrequently, about once every half-million years on average. Things are more dynamic on the Sun, where the magnetic field flips every 11 years. New X-ray observations with instruments on the Neil Gehrels Swift space observatory are believed to have caught the reversal of a black hole's accretion disk for the first time. The black hole in question is a supermassive monster happily munching away at the center of a relatively nearby galaxy called 1ES1927+654, and represented in an artist's interpretation above. This accreting black hole underwent an usual outburst observed in 2018, and X-ray observations by Swift showed that, while the black hole was getting dramatically brighter at optical and UV energies, it was fading away in X-rays. This strange fading in X-rays is believed to have been caused when the disk magnetic field catastrophically weakened on the way to a magnetic reversal, which casued the collapse hot gas in a magnetically-supported region near the disk.