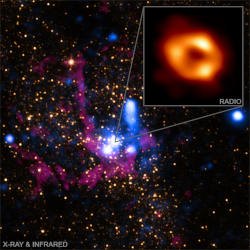 
There's a yawning chasm at the dead center of our Milky Way galaxy, a one-way portal to who knows where. This danger zone was first identified by unusual emissions in the radio, and christened "Sagittarius A*" ("Sgr-A*" pronounced "Saj-A-star"). The waltz of stars near the center of the Galaxy showed them in thrall to an object with a mass of four million times the mass of the Sun, but which was otherwise unseen. But no longer! Painstaking observations with the Event Horizon Telescope (actually a consortium of 8 radio telescopes and 300 scientists from 80 institutions around the globe) produced the first image of this Galactic monster. The glowing orange ring around a dark center in the inset image above is the actual image of Sgr-A* obtained by EHT. The orange ring is emission from glowing gas near the black hole shown in false color. The image of this gas is distorted and bent by the intense gravity of Sgr-A*, and the inner edge of this ring marks the boundary of Sgr-A*'s event horizon, beyond which nothing can escape (we think). Despite its enormous mass, the size of the inner hole is so small that it would easily fit within the orbit of Mercury. The inset image is superimposed on a larger image of the Galactic center in X-ray light (from the Chandra X-ray Observatory, shown in purple) and in the infrared (in yellow and purple). These observations were taken near the time of the EHT observations and were important to monitor the activity of Sgr-A* while the EHT was taking its picture.

ApJL: Focus on First Sgr A* Results from the EHT