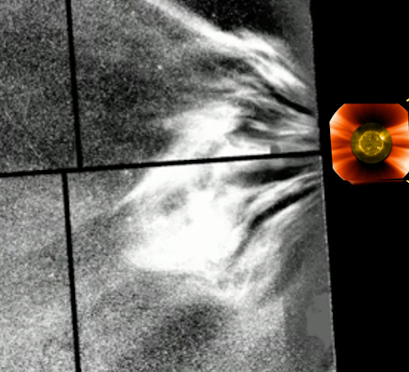 
The Sun is usually thought to be a benign, constant source of power for earth, gently warming the planet to precisely the right range to allow for water to exist as a liquid, providing the essential medium which allows the necessary chemical reactions for life to proceed. But the Sun is a controlled thermonuclear bomb, creating energy at its core via the raw conversion of mass into energy by squeezing bare protons into Helium nuclei. All this power flooding from the center to the sun's surface makes the sun's interior layers a roiling mass of electrified, magnetized gas. Sometimes this untameable electromagnetic energy gets twisted, intensified and released as a dangerous eruption of high-energy charged particles and radiation we call a solar flare. The energy released in solar flares can be damaging to vital communications and information satellites, not to mention astronauts. Clearly the Sun bears watching. An important spy on the Sun is ESA's Solar Orbiter (SoLO for short), the most complex solar observatory every launched into space. SoLO watches the Sun with unprecedented resolution over almost the entire electromagnetic spectrum from radio to X-ray energies. At its closest approach, SoLO is closer to the Sun than the planet Mercury, so it provides extremely sharp images of even the smallest magnetic structures in the Sun's atmosphere. It also provides images of the solar corona, the extended, hot atmosphere that surrounds the Sun, visible to earthlings during a total solar eclipse. This allows SoLO to show how bursts of energy near the surface result in large-scale coronal mass ejections. The montage above was made from a fascinating SoLO video taken on March 25, 2022 (just a day before SoLO's closest approach to the Sun). On the right above is an image of the Sun in extreme ultraviolet light, highlighting especially hot regions near the Sun's photosphere. The red arrow marks a solar flare in the process of erupting. The image at the center and left show the disk of the Sun, and the solar corona, to scale; in the lower part of the corona a bright region shows the size of an enormous mass ejection of high energy charged subatomic particles traveling into interplanetary space.