The basic building blocks of Universal structure are clusters of galaxies, groups of hundreds of galaxies bound by the gravity of their dark matter, their intracluster gas, and (to a minor extent) the stars and gas contained within the individual galaxies. Galaxy clusters grow and evolve by merging together, titanic collisions that produced large scale shocks in intergalactic space. Interestingly, because of the low density of intergalactic space, these collisions are actually "collisionless", meaning that the chance of one atom in the shocked gas colliding with another is extremely small. Instead of atomic collisions, changes in temperatures and densities along the shock front are produced by electromagnetic instabilities within the plasma itself. Such collisionless shocks are common in space and occur over wide range, from the heliosphere around our solar system to the collision of winds between binary stars, to supernovae and, on the largest scales, mergers of galaxy clusters. The temperatures of the shocked gas can rise to tens of millions of degrees or higher, producing large amounts of X-rays, so X-ray observations are an important way to study these cosmic collisions. The image above shows a deep (23 days long) Chandra X-ray Observatory image (in purple) of Abell 2146, a merger between two clusters of galaxies, superimposed on an optical image from the Subaru telescope (located at the summit of Maunakea, Hawaii). As the labels on the image show, cluster 2 is moving towards the bottom left of the image, plowing through cluster 1. The Chandra X-ray image shows the hot gas produced by the collision and nicely defines the boundaries of the shock fronts stretching for more than a million light-years ahead of and behind the merger. This observation represents the first time such a merger shock could be studied in detail, and provides important clues to the physical processes by which gas is compressed and heated by cosmic shocks on a wide range of spatial scales. 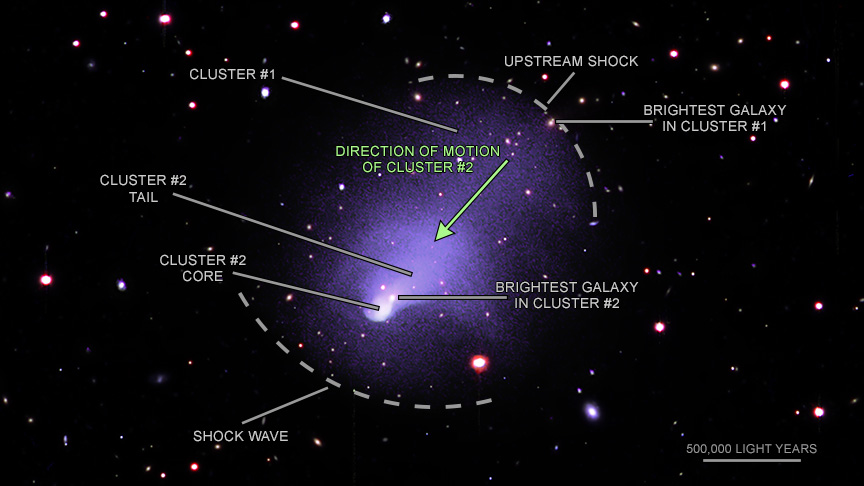 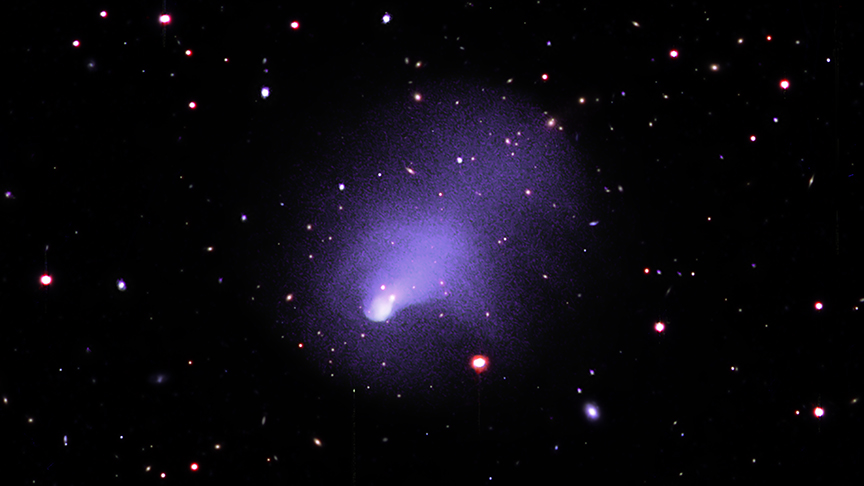 A new study shows a deep connection between some of the largest, most energetic events in the Universe and much smaller, weaker ones powered by our own Sun.

The results come from a long observation with NASA's Chandra X-ray Observatory of Abell 2146, a pair of colliding galaxy clusters located about 2.8 billion light years from Earth. ...

In this composite image of Abell 2146, Chandra X-ray data (purple) shows hot gas, and Subaru Telescope optical data shows galaxies (red and white). One cluster (labeled #2) is moving towards the bottom left in the direction shown and plowing through the other cluster (#1). The hot gas in the former is pushing out a shock wave, like a sonic boom generated by a supersonic jet, as it collides with the hot gas in the other cluster. ...


The Structure of Cluster Merger Shocks: Turbulent Width and the Electron Heating Time-scale ~ H. R. Russell et al
Know the quiet place within your heart and touch the rainbow of possibility; be
alive to the gentle breeze of communication, and please stop being such a jerk. — Garrison Keillor
Top
2 posts • Page 1 of 1