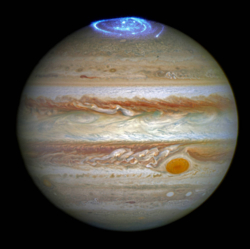 
Jupiter is the largest and most massive planet in our solar system, more massive than all the other planets combined, nearly 318 times the mass of the earth. We know now that other Jupiter-size planets exist in other solar systems, so that the formation of large, massive planets like Jupiter may be fairly common, and may play a key role in the formation of planetary systems. Jupiter, a bright naked-eye planet, is itself is largely a mystery. Jupiter's atmosphere is distinguished by swirling, banded ammonia clouds, and the famous Great Red Spot, an enormous cyclonic storm bigger than two earths. The 9.8 hour Jovian day is the shortest of any major planet. Jupiter's fast rotation helps power a strong magnetic field, which traps charged particles from the sun and produces a beautiful light show near the magnetic poles, as shown in the far-ultraviolet Hubble Space Telescope image above. This light-show is Jupiter's aurora, its version of the earth's Northern lights. Jupiter's aurora is very dynamic, as detailed by series of Hubble images. NASA's Juno spacecraft has provided us with an unprecedented understanding of Jupiter's interior, its atmosphere, winds and weather, and its magnetic field. Juno, after a 5-year, 2-billion mile journey, arrived at Jupiter on July 4, 2016. Juno orbits the planet once every 14 days, and its radiation-hardened instruments have helped understand the weather patterns and "cyclones" in Jupiter's atmosphere, discovered unusual "polygonal storms" near Jupiter's poles, and mapped Jupiter's intense magnetic field and its aurorae.