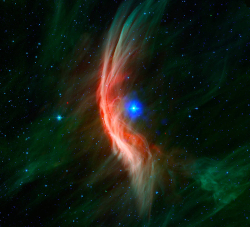 
Some stars are so bright and hot they literally blow themselves apart. The pressure of the radiation produced inside the star can overcome the hold of gravity, creating strong stellar winds which stream from the star into space at speeds of millions of miles per hour, pumping an amount of matter equal to the mass of Jupiter into the galaxy every thousand years or so. One of the closest of these stars to earth is the "runaway" star, Zeta Ophiuchus. Zeta Oph (as it's familiarly known) started out bound to a trusted stellar companion, each quietly orbiting the other, until, about a million years ago, the companion exploded, propelling Zeta Oph through the Milky Way at a speed of about 60,000 miles per hour. The combination of Zeta Oph's speed through the Galaxy and its strong, light-driven stellar wind creates a cosmic bow shock in the Galaxy's interstellar medium, just like you'd see around a boat speeding on a calm lake (but at about 50,000 knots). The image above is a composite infrared and X-ray image of the complex extended shocks around Zeta Oph. The wispy structure in red and green is the infrared emission from the shocked gas and dust at the boundary of the bow shock, as seen by NASA's Spitzer Space Telescope, and which stretches for about ten lightyears from end-to-end. Closer to the star, the bluish region marks a bubble of hot (million-degree) X-ray emitting gas produced by Zeta Oph's fast stellar wind and seen by the cameras on NASA's Chandra X-ray Observatory. Understanding these structures helps us understand the effects of stellar mass loss and motion on the star's home galaxy. 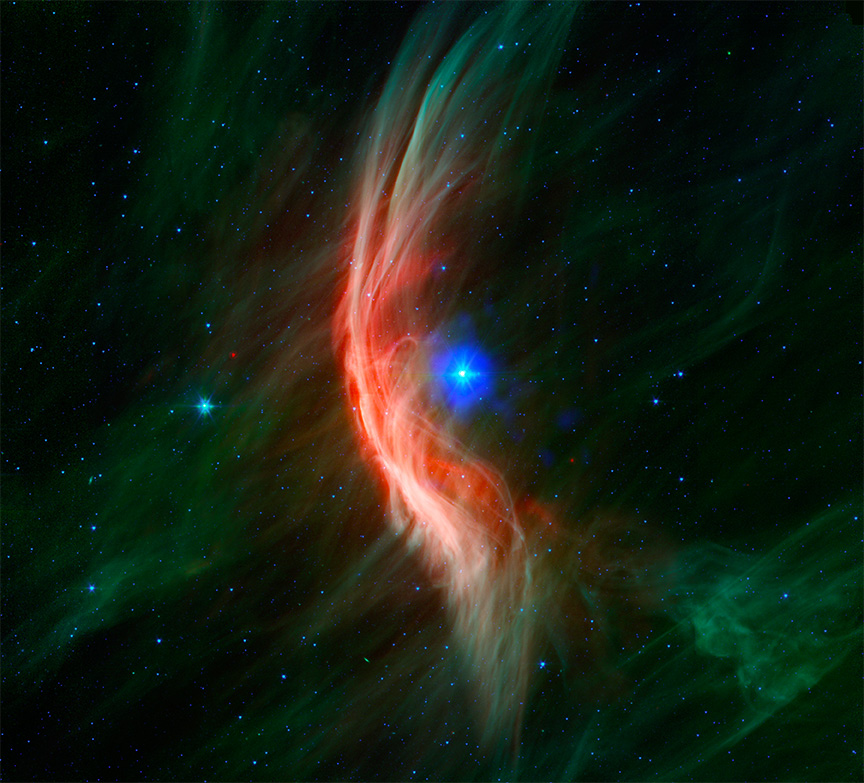 Zeta Ophiuchi is a star with a complicated past, having likely been ejected from its birthplace by a powerful stellar explosion. A new look by NASA's Chandra X-ray Observatory helps tell more of the story of this runaway star.

Located about 440 light-years from Earth, Zeta Ophiuchi is a hot star that is 20 times more massive than the Sun. Previous observations have provided evidence that Zeta Ophiuchi was once in close orbit with another star, before being ejected at about 100,000 miles per hour when this companion was destroyed in a supernova explosion over a million years ago. Previously released infrared data from NASA's now-retired Spitzer Space Telescope, seen in this new composite image, reveals a spectacular shock wave (red and green) that was formed by matter blowing away from the star's surface and slamming into gas in its path. Data from Chandra shows a bubble of X-ray emission (blue) located around the star, produced by gas that has been heated by the effects of the shock wave to tens of millions of degrees.