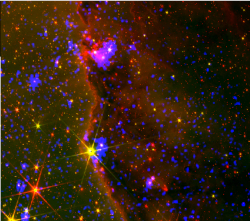 
One of the spectacular first images released by NASA's James Webb Space Telescope was of the "Cosmic Cliffs", a region of star formation in the Milky Way's Carina Nebula. The "cliffs" are actually boundaries where powerful ultraviolet radiation from stars in the nebula is blasting away at clouds of gas and dust, the raw material for new stars. The cosmic cliffs are one of the star factories in the Galaxy, and studies of this region helps reveal the secrets of how stars form and evolve, even in often hostile galactic neighborhoods. The image above is a composite, false color image comparing JWST images in the infrared with an X-ray image from NASA's Chandra X-ray Observatory. The JWST image is shown in red and green, and highlights stars and scattered starlight from dust in the nebula. Some of the bright stars in the JWST image show si diffraction spikes, which are instrumental artifacts produced by the JWST mirror structure. The blue color shows the Chandra X-ray image, which pinpoints energetic, active, fast-spinning young stars, some of which undoubtedly have planetary systems around them. The comparison of the JWST infrared image and the X-ray image from Chandra shows that some, but not all, of the stars visible in the JWST images are X-ray sources, while Chandra helps reveal emission from faint, very young stars still surrounded by thick clouds of gas and dust.