Explanation: What's happening in the Statue of Liberty nebula? Bright stars and interesting molecules are forming and being liberated. The complex nebula resides in the star forming region called RCW 57, and besides the iconic monument, to some looks like a flying superhero or a weeping angel. By digitally removing the stars, this re-assigned color image showcases dense knots of dark interstellar dust, fields of glowing hydrogen gas ionized by these stars, and great loops of gas expelled by dying stars. A detailed study of NGC 3576, also known as NGC 3582 and NGC 3584, uncovered at least 33 massive stars in the end stages of formation, and the clear presence of the complex carbon molecules known as polycyclic aromatic hydrocarbons (PAHs). PAHs are thought to be created in the cooling gas of star forming regions, and their development in the Sun's formation nebula five billion years ago may have been an important step in the development of life on Earth.

One of the most beautiful APODs I've ever seen.
Mark Goldfain
Top 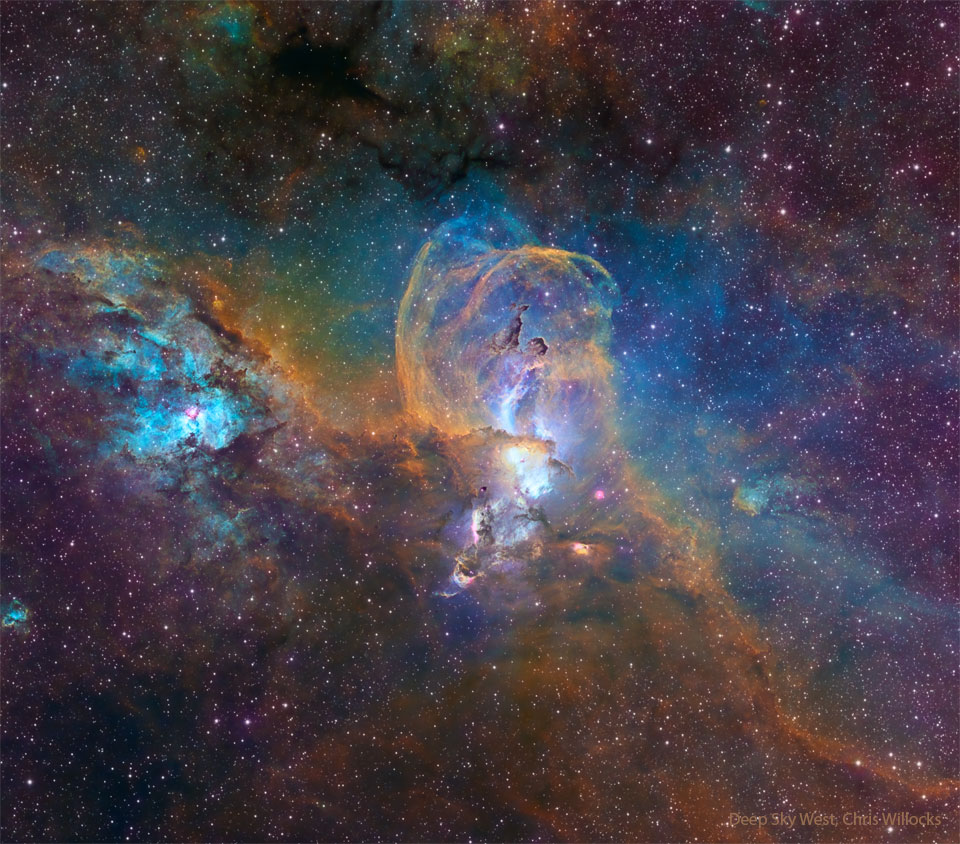 
NGC 3576 (I prefer that designation) is indeed a spectacular site of star formation! The "Statue of Liberty" shape is easy to make out.


I doubt that those great loops were made by dying stars. To me, it seems more likely that they have been formed by the outbursts of the birth process of massive stars and the ensuing ferocious power of the massive stars themselves.

Like the Statue of Liberty Nebula, the Omega Nebula is characterized by a great outflow of gas ending in huge arcs as the gas plows into the surrounding interstellar medium. To my knowledge, the ionizing cluster in M17, NGC 6618, is very young, and I haven't heard anything about dying stars and their histrionics creating loops in the Omega Nebula. Therefore, I believe it is the tantrums of massive baby stars and the ferocious stellar winds of massive young stars that cause the outflow of gas and the great arcing loops.

Read in this post from Chandra/Harvard.edu how the young stars in M17 cause a "champagne flow"

of hot gas out of the nebula. I think something at least slightly similar could be happening in the Statue of Liberty Nebula.


It is interesting to compare the Statue of Liberty Nebula with another nebula that is in the field of view of NGC 3576 from the perspective of the Earth, although it is thousands of light-years farther away, NGC 3603.

Note in the RGB picture by Astrosurf that the Statue of Liberty nebula is pink in color from hydrogen alpha radiation, whereas NGC 3603 (left) is more peach-colored. The difference is caused by dust reddening. NGC 3603 is thousands of light-years farther away from us than NGC 3576, and is actually located in another spiral arm!

Wikipedia wrote:
NGC 3603 is the most massive visible cloud of glowing gas and plasma, known as a H II region, in the Milky Way.[6] The central star cluster is the densest concentration of very massive stars known in the galaxy.

To get an idea of how massive and powerful NGC 3603 is, take a look at today's APOD again. Note how much cyan there is in the central part of the NGC 3603 nebula. There is nowhere near so much cyan in the Statue of Liberty Nebula. Cyan in this APOD undoubtedly means ionized oxygen. This emission, OIII, is a signature of very high ionization indeed, and it is usually found in the presence of the presence of very massive stars. NGC 3603 out-ionizes NGC 3576 like a heavyweight boxer knocks the daylight out of a welterweight fighter. Ka-pow!!


Ann
You do not have the required permissions to view the files attached to this post.
Last edited by Ann on Tue Sep 20, 2022 5:41 pm, edited 1 time in total.
Color Commentator
Top

IC59IC63crawford600h.jpg
I wanted to post this without the stars but could not find in today's
APOD!

I doubt that those great loops were made by dying stars. To me, it seems more likely that they have been formed by the outbursts of the birth process of massive stars and the ensuing ferocious power of the massive stars themselves.
...

I fully agree with you! In the center there are some high-energy stars, which are visible in the X-ray and probably also trigger the dust filaments. 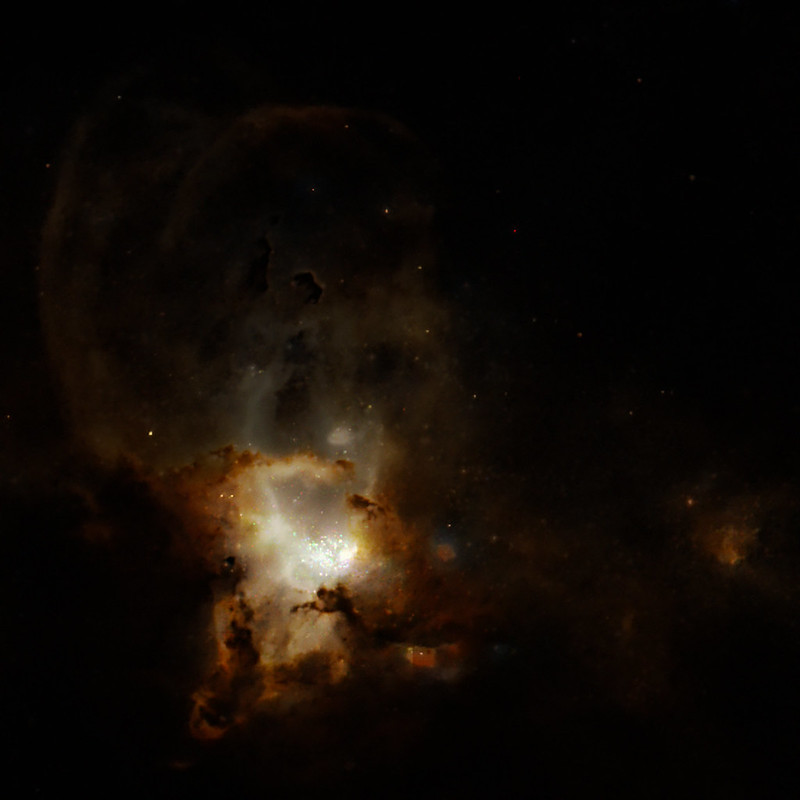