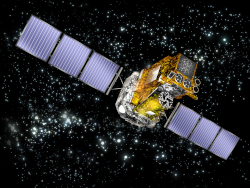 
October 17, 2022 marked the twentieth anniversary of the launch of the INTErnational Gamma-Ray Astrophysics Laboratory, or INTEGRAL as it's more widely known. INTEGRAL, a mission developed by the European Space Agency, was the first space observatory able to simultaneously observe high-energy gamma rays, X-rays and visible light produced by neutron stars, black holes, active galaxies, normal stars, gamma-ray bursts and powerful cosmic explosions. INTEGRAL was launched with a nominal 2-year mission life, but has been so successful that the mission has been extended through 2022. INTEGRAL has produced maps of the Milky Way, resolving the mysterious source of gamma-ray emission from the center of our galaxy, and mapped out Galactic antimatter. In August 2017, INTEGRAL, along with the Fermi Gamma-Ray Space Telescope, detected a short burst of gamma-ray emission. While such gamma-ray bursts are not unusual (they are generally observed to happen a few times per week), this burst was revolutionary, since it was associated with gravitational wave event GW170817, shown to be the result of the merger of two neutron stars. This observation confirmed that neutron star mergers could produce short gamma ray bursts, and for the first time connected gravitational and electromagnetic emission, ushering in a new era of multi-messenger astronomy. Despite a near-death experience about a year ago, INTEGRAL continues to make new and ground-breaking observations across the high-energy Universe, and even of some local phenomena closer to home.