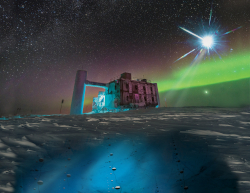 
Superman's X-ray vision came in very handy for spotting hidden things by allowing him to see through walls. However, this ability could be easily thwarted by hiding nefarious acts behind a shield of lead or other dense material. But nothing is hidden to someone who has neutrino vision, since neutrinos (tiny sub-atomic particles) can pass through even the densest material nearly unimpeded - nothing stands in their way. Neutrinos are produced by high-energy processes, like thermonuclear fusion reactions at the center of stars (including the Sun - trillions of solar neutrinos harmlessly passed through you in the time it took to read this sentence), or the cataclysmic regions near accreting black holes. Neutrinos move at the speed of light, and, since they hardly interact with matter, they are excellent probes of the hidden, high-energy processes taking place in the cosmos. But neutrinos are extremely hard to catch, and finding even one or two cosmic neutrinos from the depths of space requires an enormously large effort. IceCube, shown in the artist's illustration above, is the earth's premier neutrino observatory. IceCube is located in Antarctica, near the south pole, and uses a cubic kilometer of transparent Antarctic ice as its neutrino trap. Of the untold number of neutrinos from beyond our solar system, one or two may hit a water atom in this vast volume of ice, producing a tell-tale signal that lets neutrino astronomers know they've seen a cosmic neutrino from a certain object in space. Despite the long odds, IceCube has actually detected a handful of neutrinos from powerful, transient events associated with certain far-away active galaxies. Now a detailed analysis of a decade of neutrino events from IceCube has shown that a relatively near-by galaxy about 45 million light years away known as NGC 1068 is an apparent source of cosmic neutrinos. If confirmed, it's likely that particle acceleration near the black hole in this galaxy (which is hidden from direct view by enormous quantities of gas and dust surrounding the black hole) is the source of the neutrinos. Although only 79 IceCube neutrinos could be attributed to NGC 1068, this still corresponds to an enormous outpouring of high-energy neutrinos, about ten times more luminous than radiated electromagnetically from NGC 1068 at these energies. The detection of neutrino emission from NGC 1068 marks the dawn of a new era of neutrino astronomy, allowing scientists to contrast and compare the environments and processes which produce cosmic neutrinos.


IceCube: Neutrinos Give First Glimpse into Depths of Active Galaxy