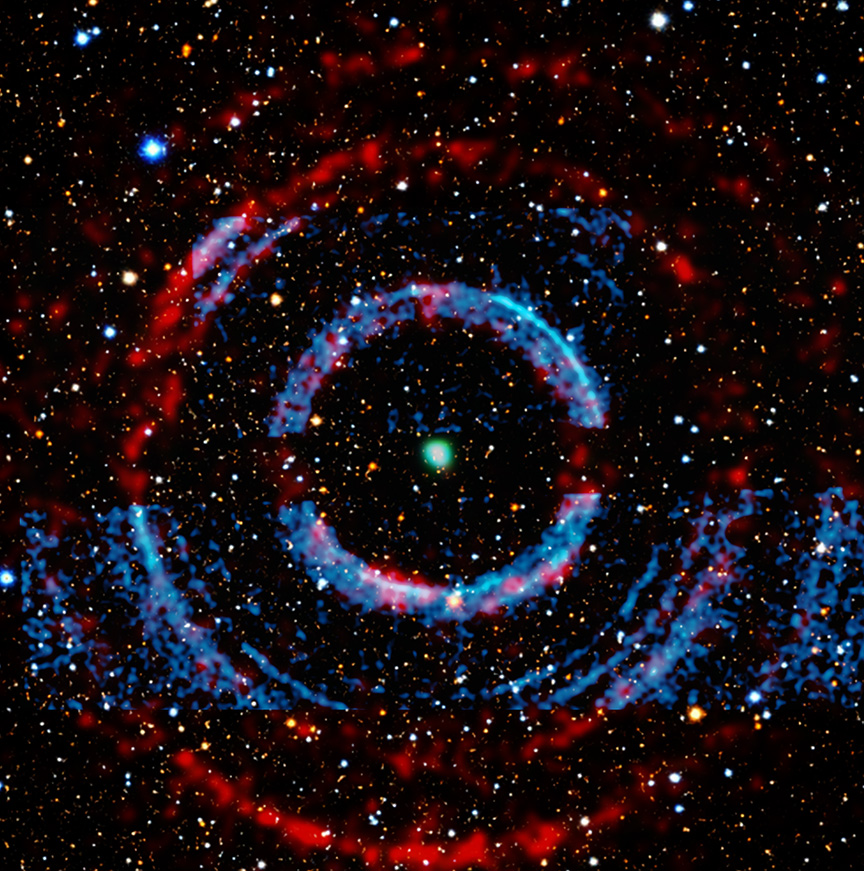 X-ray: Chandra: NASA/CXC/U.Wisc-Madison/S. Heinz et al.;
Swift: NASA/Swift/Univ. of Leicester/A. Beardmore;
Optical: DSS; Sonification: NASA/CXC/SAO/K.Arcand,
SYSTEM Sounds (M. Russo, A. Santaguida)
Click for video with sonification
One of the surprising features of black holes is that although light (such as radio, visible, and X-rays) cannot escape from them, surrounding material can produce intense bursts of electromagnetic radiation. As they travel outward, these blasts of light can bounce off clouds of gas and dust in space, similar to how light beams from a car’s headlight will scatter off fog.

A new sonification turns these “light echoes” from the black hole called V404 Cygni into sound. Located about 7,800 light-years from Earth, V404 Cygni is a system that contains a black hole, with a mass between five and 10 times the Sun’s, that is pulling material from a companion star in orbit around it. The material is funneled into a disk that encircles the stellar-mass black hole.

This material periodically generates bursts of radiation, including X-rays. As the X-rays travel outward they encounter clouds of gas and dust in between V404 Cygni and Earth and are scattered at various angles. NASA’s Chandra X-ray Observatory and Neil Gehrels Swift Observatory have imaged the X-ray light echoes around V404 Cygni. Because astronomers know exactly how fast light travels and have determined an accurate distance to this system, they can calculate when these eruptions occurred. This data, plus other information, helps astronomers learn more about the dust clouds, including their composition and distances.

The sonification of V404 Cygni translates the X-ray data from both Chandra and Swift into sound. During the sonification, the cursor moves outward from the center of the image in a circle. As it passes through the light echoes detected in X-rays (seen as concentric rings in blue by Chandra and red by Swift in the image), there are tick-like sounds and changes in volume to denote the detection of X-rays and the variations in brightness. To differentiate between the data from the two telescopes, Chandra data is represented by higher-frequency tones while the Swift data is lower. In addition to the X-rays, the image includes optical data from the Digitized Sky Survey that shows background stars. Each star in optical light triggers a musical note. The volume and pitch of the note are determined by the brightness of the star. ...


A Joint Chandra and Swift View of the 2015 X-ray Dust-Scattering Echo of V404 Cygni ~ S. Heinz et al
Know the quiet place within your heart and touch the rainbow of possibility; be
alive to the gentle breeze of communication, and please stop being such a jerk. — Garrison Keillor
Top
1 post • Page 1 of 1