Hubble: Tiny, Hidden Galaxy Provides a Peek into the Past

Hubble: Tiny, Hidden Galaxy Provides a Peek into the Past 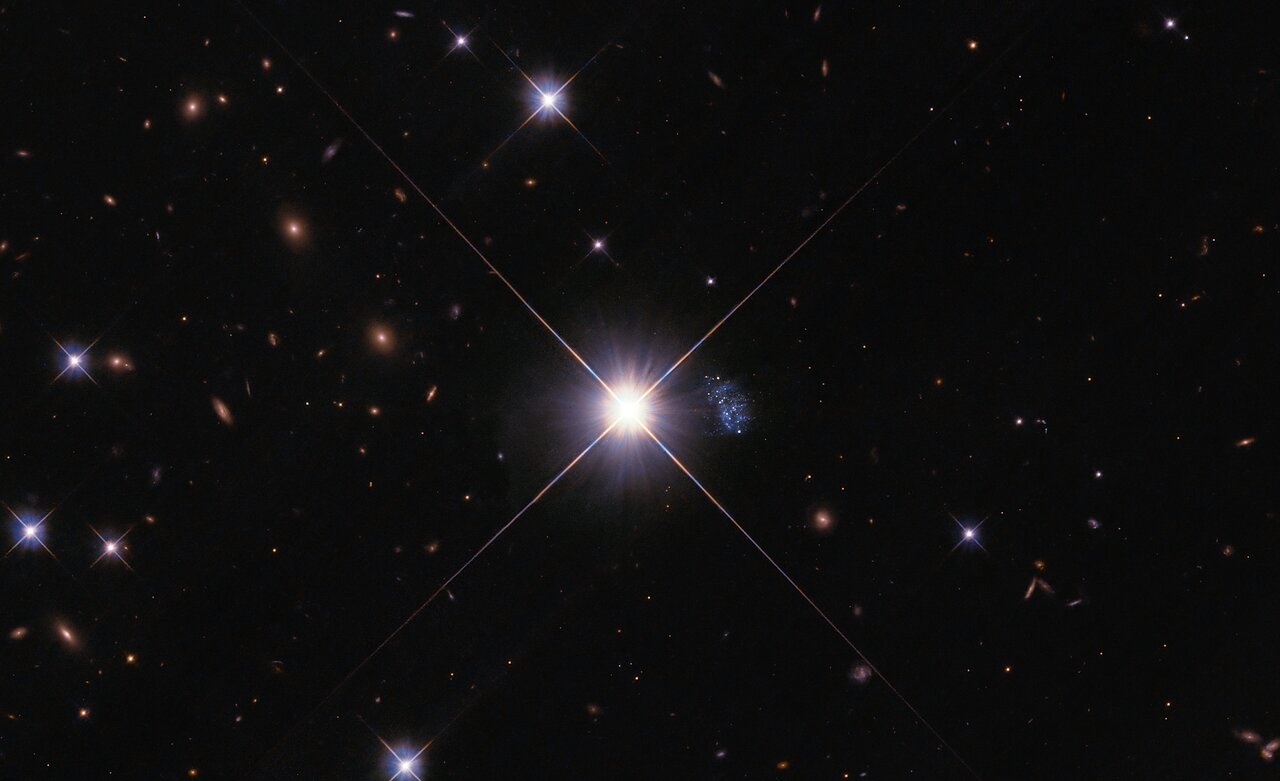 A large bright star is centered, with four long rays extending in an X shape. Between the rays on the right is a small blue peanut-shaped galaxy with some bright spots. Smaller similar stars and orange background galaxies fill the image.

"Peekaboo" Dwarf Galaxy HIPASS J1131–31
Science: NASA, ESA, Igor Karachentsev (SAO RAS)
Image Processing: Alyssa Pagan (STScI)
Peeking out from behind the glare of a bright foreground star, astronomers have uncovered the most extraordinary example yet of a nearby galaxy with characteristics that are more like galaxies in the distant, early universe. Only 1,200 light-years across, the tiny galaxy HIPASS J1131–31 has been nicknamed "Peekaboo" because of its emergence in the past 50-100 years from behind the fast-moving star that was obscuring astronomers' ability to detect it.

The discovery is a combined effort of telescopes on the ground and in space, including confirmation by NASA's Hubble Space Telescope. Together the research shows tantalizing evidence that the Peekaboo Galaxy is the nearest example of the galaxy formation processes that commonly took place not long after the big bang, 13.8 billion years ago. ...

Astronomers describe galaxies like Peekaboo as "extremely metal-poor" (XMP). In astronomy, "metals" refers to all elements heavier than hydrogen and helium. The very early universe was almost entirely made up of primordial hydrogen and helium, elements forged in the big bang. Heavier elements were forged by stars over the course of cosmic history, building up to the generally metal-rich universe humans find ourselves in today. Life as we know it is made from heavier element "building blocks" like carbon, oxygen, iron, and calcium.

While the universe's earliest galaxies were XMP by default, similarly metal-poor galaxies have also been found in the local universe. Peekaboo caught astronomers' attention because, not only is it an XMP galaxy without a substantial older stellar population, but at only 20 million light-years from Earth it is located at least half the distance of the previously known young XMP galaxies. ...


Peekaboo: The Extremely Metal Poor Dwarf Galaxy HIPASS J1131-31 ~ I D Karachentsev et al
Know the quiet place within your heart and touch the rainbow of possibility; be
alive to the gentle breeze of communication, and please stop being such a jerk. — Garrison Keillor
Top

Re: Hubble: Tiny, Hidden Galaxy Provides a Peek into the Past

Its stars aren't from dust in the wind?