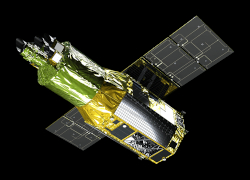 
As the saying goes, a picture is worth a thousand words. Astronomers have their own variation on this honored maxim: a spectrum is worth a thousand pictures. Technically, a spectrum is the measure of the wavelength distribution of the light emitted by an object, generally over some limited band of the entire electromagnetic spectrum. More commonly, it's a rainbow, where we can actually see the indvidual wavelengths of the light being emitted by a glowing object, like the Sun. Analysis of spectra allow astronomers to develop the most complete view of the Universe available, letting us take the temperatures of stars and galaxies, determine what they're made of, and see how they're moving. The image above shows a new tool for high energy astronomers to use to help perfect our view of the Universe. This observatory is named XRISM, the X-Ray Imaging and Spectroscopy Mission. XRISM uses a radically new technology to determine the wavelength of an individual X-ray photon: when an X-ray photon hits one of XRISM's detectors, it deposits an incredibly tiny amount of heat, and by measuring the tiny temperature increase, XRISM is able to determine the wavelength of the X-ray photon to very high precision. XRISM's detector are made of special superconducting materials which need to be held near absolute zero. XRISM's technology gives scientists the most detailed view of the X-ray spectrum emitted by high-energy astrophysical objects, especially for extended objects like supernova remnants and clusters of stars and galaxies. XRISM is a joint Japanese-US X-ray astronomy mission, scheduled for launch by Japan in 2023.