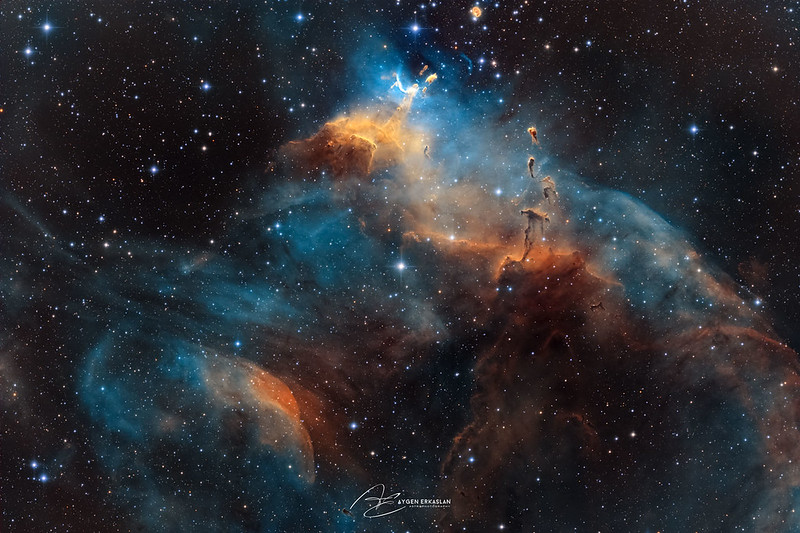 I am very pleased to share with you my take on "GUM 37 and the adjacent NGC 3572 stars cluster".

The target features glowing gas and dark dust clouds alongside the young stars of NGC 3572, a beautiful emission nebula and a star cluster located in the southern sky in the constellation Carina.

Comet C/2022 E3 ZTF captured at 4am EST on Jan 24th from my backyard outside of Philadelphia.

Technical Details
Telescope: RASA 8 f/2
Camera: ASI 2600MC Pro
Exposures: 9 x 60 seconds through broadband filter
You do not have the required permissions to view the files attached to this post.
Top

"Conjunction of the Moon, Venus, and Saturn"

https://twitter.com/WrightDobbs
https://www.facebook.com/wrightdobbsphotography
https://instagram.com/wrightdobbs
You do not have the required permissions to view the files attached to this post.
Top

This was a single long exposure that captured the reentry plasma/fireball from the NASA/SpaceX CRS-26 mission coming back to Earth. This occurred early Wednesday morning on January 11. The Cargo Dragon capsule had a splashdown just offshore of Tampa, but locations all along the Gulf Coast were able to observe the return and even hear the sonic boom earlyWednesday morning. The fireball lasted for around 1 to 2 minutes and had a successful splashdown about 6 to 7 minutes after the trail disappeared.

https://twitter.com/WrightDobbs
https://www.facebook.com/wrightdobbsphotography
https://instagram.com/wrightdobbs
You do not have the required permissions to view the files attached to this post.
Top This image of the Flaming Star, Tadpole and Spider Nebulae was taken over 4 nights in mid January 2023 from Essex in England, Bortle 6 skies. It is a 2 panel mosaic using an Askar FRA400, and an ASI 2600MM, with Antlia SHO filters.

The final integration is just over 15 hours of data using an SHO colour palette edited in both PixInsight and Photoshop. 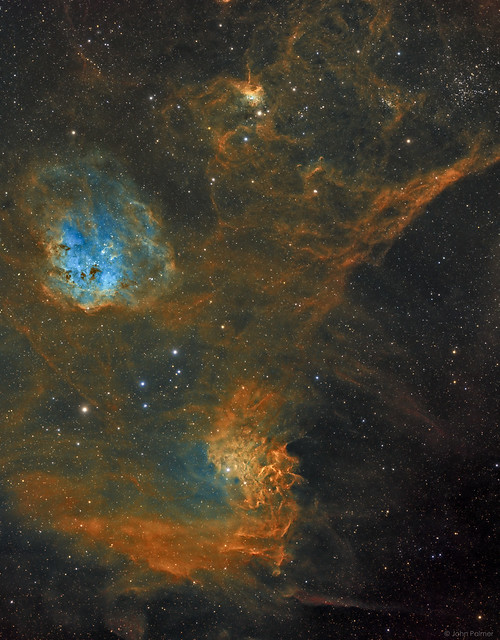 C2022E3-TommasoStellaWEB.jpg
You do not have the required permissions to view the files attached to this post.
Top 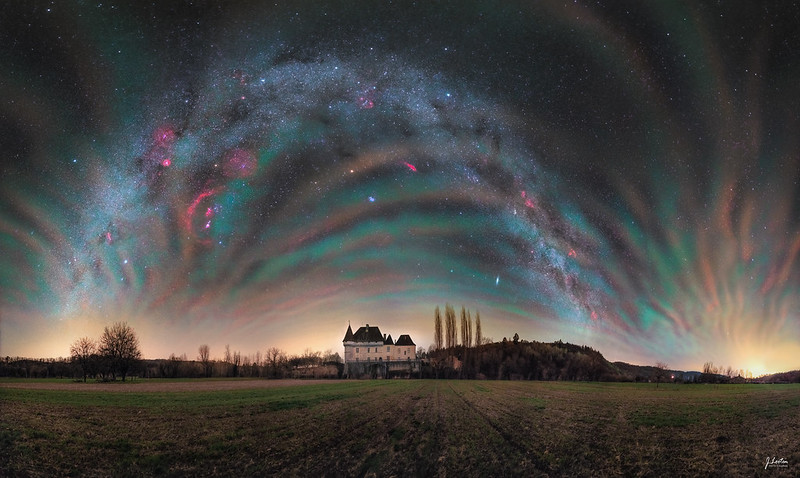 This photograph is guaranteed to be free of tricks/composites.

Saturday evening (21/01/2023), I went to the Château de Losse (Dordogne) to take a picture of the Milky Way arch. An exceptional phenomenon occurred that evening... an extraordinary airglow...

The sky seems to be covered with "multicoloured clouds"... It is not a question of parasitic colours or special treatments. It is a rare natural phenomenon caused by a chemical reaction in the upper atmosphere, where the sun's rays excite molecules which then emit a very weak light (chemiluminescence)...

These "clouds" are located between 100 and 300 km in altitude, in the thermosphere... (as a reminder, the international space station is located at an altitude of 400 km). The colour of the phenomenon changes according to the altitude where the chemical reaction takes place. The airglow can take on strange shapes, as seen here in the form of "waves". These undulations are due to the different layers of atmospheric pressure which vary according to the altitude (the air becoming rarefied). These clouds seem to emerge from the North Pole (right end) and the South Pole (left end).

For several years now, this phenomenon has been observed more and more... What are the reasons for this? Change in solar activity? Because of climate change? We don't really know... What we do know is that the development of cameras plays a major role. Sensors are becoming more sensitive, and able to capture these lights.

Airglow can be beautiful and very photogenic, but it can be detrimental to scientific observations... For example, it limits the performance of ground-based telescopes, hence the need to send telescopes beyond the atmosphere (like Hubble and James Webb for example).

Airglow can be observed with the naked eye. This was the case that evening, I thought the sky was covered with (ordinary) clouds when in fact it was airglow. However, the colours are not visible to the human eye, which is far less sensitive than a camera sensor. Nevertheless, you need a very good sky to be able to observe it.

The entire arch of the Milky Way is visible here, thanks to a 180° panorama. On the left: Sirius and the constellation Orion. In the centre: Mars, the Pleiades and the California Nebula. Right: the constellation of Cassiopeia, the double cluster of Perseus and the Andromeda galaxy
This photo session reminded me of my childhood, when my grandparents used to show me the castles of the Vézère valley. I would never have imagined that 15 years later, I would come alone to take a picture of one of the rarest atmospheric phenomena.

Mars and giants
Image credit & copyright: Steve Johnston.
A fog filter was used to enhance Mars and the brighter stars in this image taken from Noojee, Victoria, Australia on 17 December 2022.
The bright yellowish hues of Mars dominates the scene in the lower left just above the treeline. Above Mars, the red giant Aldebaran, and to the right, the red supergiant Betelgeuse, compliment the color palette. A panorama of 3 x 8 seconds exposure, taken with a Canon 6D and 28mm lens at f/2.8, ISO-6400 and stitched in Microsoft ICE.
You do not have the required permissions to view the files attached to this post.
Top

Clouds are one of the recurrent nightmares for people trying to take pictures of the sky. But not this time. It was a clear evening on Jan, 25th on the Italian side of the Alps: Jupiter and the Moon, in conjunction, were slowly setting towards Mount Viso, one of the iconic peaks of the Western Alps. I moved there aiming to capture the ZTF comet and I was setting up my gear when a burst of high clouds breached from the French side and passed in front of the Moon, creating a spectacular iridescent halo. I turned my camera to the Moon and shot some pictures before the clouds moved away and dissolved.

Moon-Jupiter-cloud-rainbow-halo-over-Mount-Viso-1920[1].jpg
https://cosmoedintorni.org/wp-content/u ... o-1920.jpg
You do not have the required permissions to view the files attached to this post.
Last edited by bystander on Fri Jan 27, 2023 2:59 pm, edited 1 time in total.
Reason: Please, no hot links to images > 500 kb. Uploaded image as an attachment.
Top 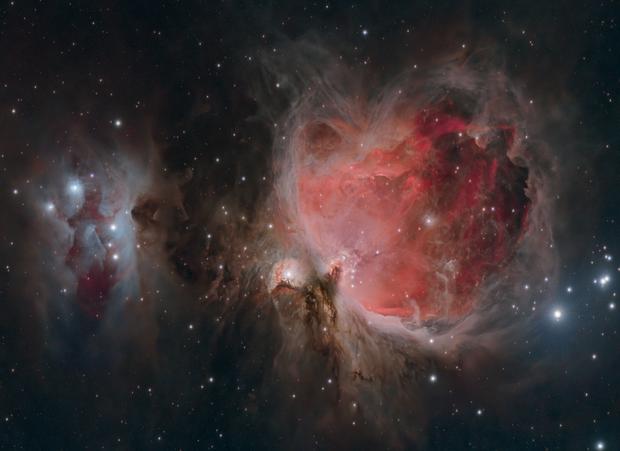 Shot with a monochrome camera and luminance, Red, Green and Blue Filters. This is 6 hours of integration; exposures were 60 seconds for Luminance and 180 seconds for RG&B

Also took 2 second images for the trapezium. I hope you like it.


it’s one of my favorite astro targets!
The Orion Nebula a popular target for astronomers and astrophotographers of all skill sets.

Simeis 57, The Propeller Nebula in SHO

Propeller_Final_3_web.jpg
7.73%
You do not have the required permissions to view the files attached to this post.
Top 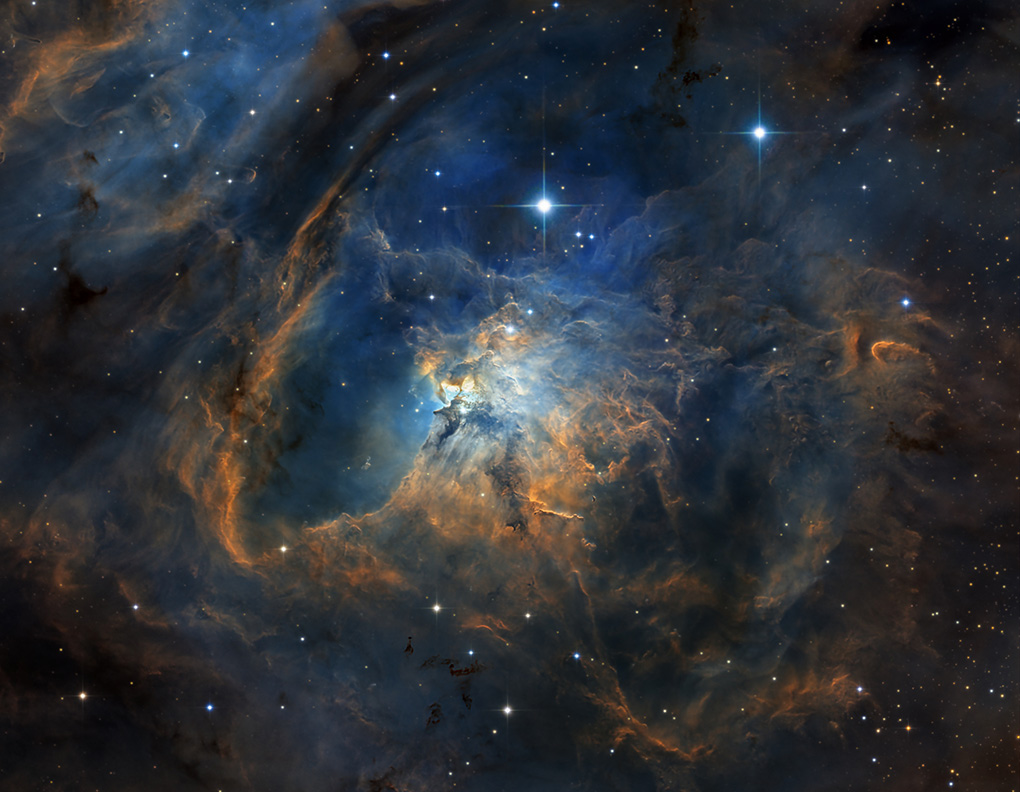 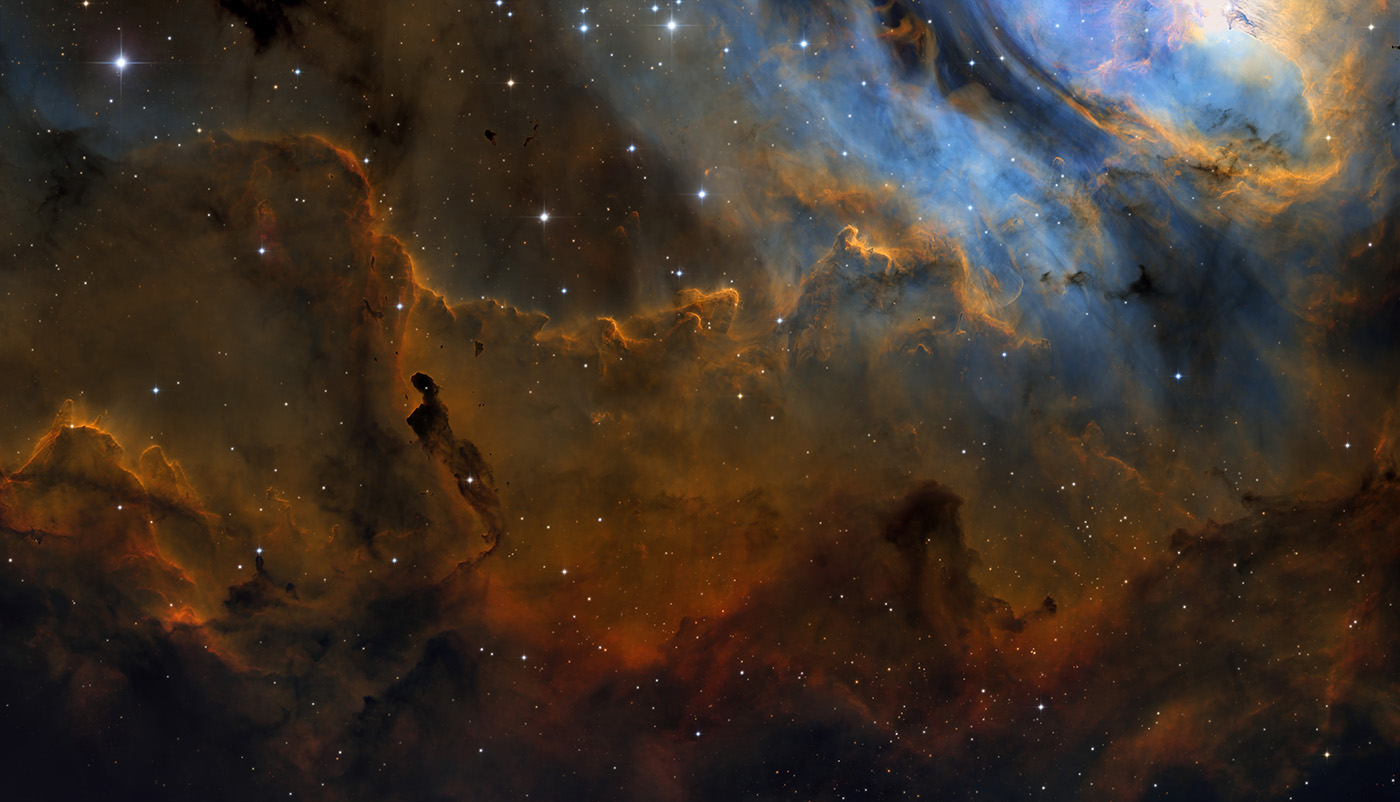 I was saving this image for a special moment, so I decided to post it here, for me it was my best moon image of last year.
The Moon is usually seen in subtle shades of gray or yellow
The different colors are recognized to correspond to real differences in the chemical composition of the lunar surface.
The blue tones reveal areas rich in ilmenite, which contains iron, titanium and oxygen, mainly titanium, while the orange and purple colors show regions relatively poor in titanium and iron. The white / gray tones refer to areas of greater exposure to sunlight.
Moon trips have already been guided through similar images.

PROCESSING AND CAPTURE:
Software: Adobe Photoshop, SharpCap, AutoStakkert AutoStackert and Registax 6.
The background was used the HDR technique with the full moon captured during the day 07/13/2022

After one whole month of data collection, the thermal change of the lunar cycle has been finally captured.

The Andromeda Galaxy or M31 is a giant spiral galaxy. Located in the constellation of the same name, it is about 2.5 million light-years from us and is the farthest celestial object from us that can be seen with eye naked. M31 belongs to the Local Group, which contains 30 small galaxies and three large spiral galaxies: Andromeda itself, the Milky Way and the Triangulum Galaxy (M33). Its mass is estimated to be 1.5 times Milky Way's and contains about a trillion suns. It is twice as bright as our Milky Way.
M31 is approaching the Milky Way at a speed of 140 km/s and it is believed that within 3/5 billion years it could collide with it, merging and forming a giant elliptical galaxy.
Two satellite galaxies of M31 also appear in this image: M32 (upper-right quadrant) and M110 (lower-left quadrant). Both are dwarf elliptical galaxies orbiting M31.
The field of view covered by this photograph is approximately 117 arc minutes x 88 arc minutes. The image resolution is 2.1 arcseconds per pixel. Have a nice Sunday afternoon, dear astro friends!
Today I show you the first results from the recordings of a rented telescope in Australia. A very sensible investment for me, because from my point of view you don't get to see this property in Central Europe! A magnificent ultrawidefield shot as a 2-part mosaic, with a multitude of small objects! There is so much to discover in this neighboring galaxy!

At the bottom left of the image and as Extra Crop, 47 Tucanae (also known as NGC 104) is the second brightest globular cluster in the sky after Omega Centauri and is already visible to the naked eye as a small nebula. It's a particularly large, ancient cluster, located about 15,000 light-years from Earth.

At the top right of the image and as an extra crop, the open star clusters NGC460 and NGC465, which are associated with an H-II region, and NGC 456, an emission nebula with an open star cluster.

Taken with a Takahashi FSQ ED, focal 530m, f/5 and a FLI Microline 16803 CCD, filter: Astrodon Gen2 series E.
Lights per panel: 16 lights at 120s each for luminance, 8 lights at 120s each for R, B and G and 8 lights each at 300s hAlpha and OIII.
Imaging with rented remote telescope system at iTelescope (T8 setup) in Siding Spring Observatory, Australia. 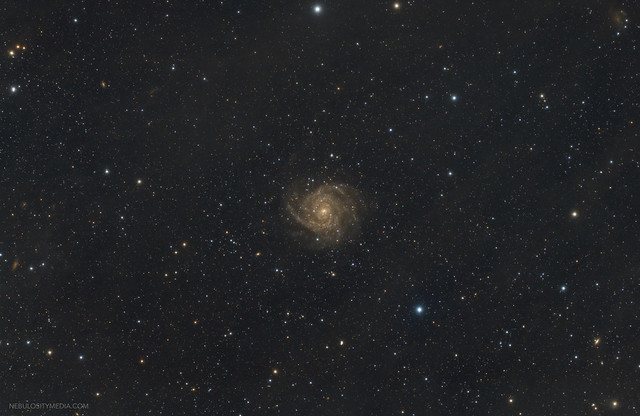 IC342 - "Hidden Galaxy" - is an intermediate spiral galaxy in the constellation of Camelopardalis about 10.7 Million Light Years away. It would be one of the brighter galaxies in the night time sky, however since it's located on the central disk of the Milky Way galaxy, it is heavily obscured by dust from the Milky Way, hence the nickname "Hidden Galaxy"


This is a 81x300" Integration. Shot with one night at my Bortle 2 dark site in Comanche, TX and the other night at a bottle 4 site closer to the DFW area.
Top 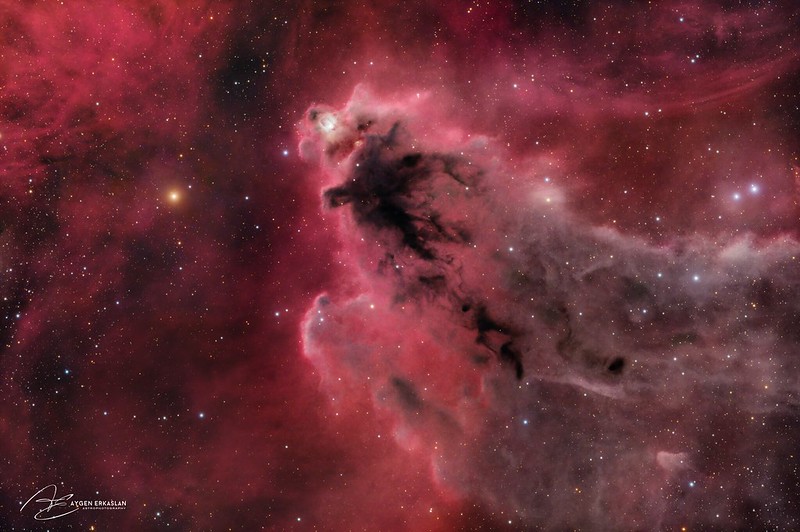 With the weather conditions improving here in Europe, I finally had the chance to go through a new interesting target : LDN 1622 - commonly known as the mythical "Boogeyman". LDN 1622 is a dark nebula in Orion - complex structures of dust which can be only detected through long exposures. With regards to the framing that I chose, it gives the feeling that we have an intriguing silhouette running so fast that we stil see the trail of smoke behind him.

https://www.astrobin.com/ya0b2o/
You do not have the required permissions to view the files attached to this post.
Top 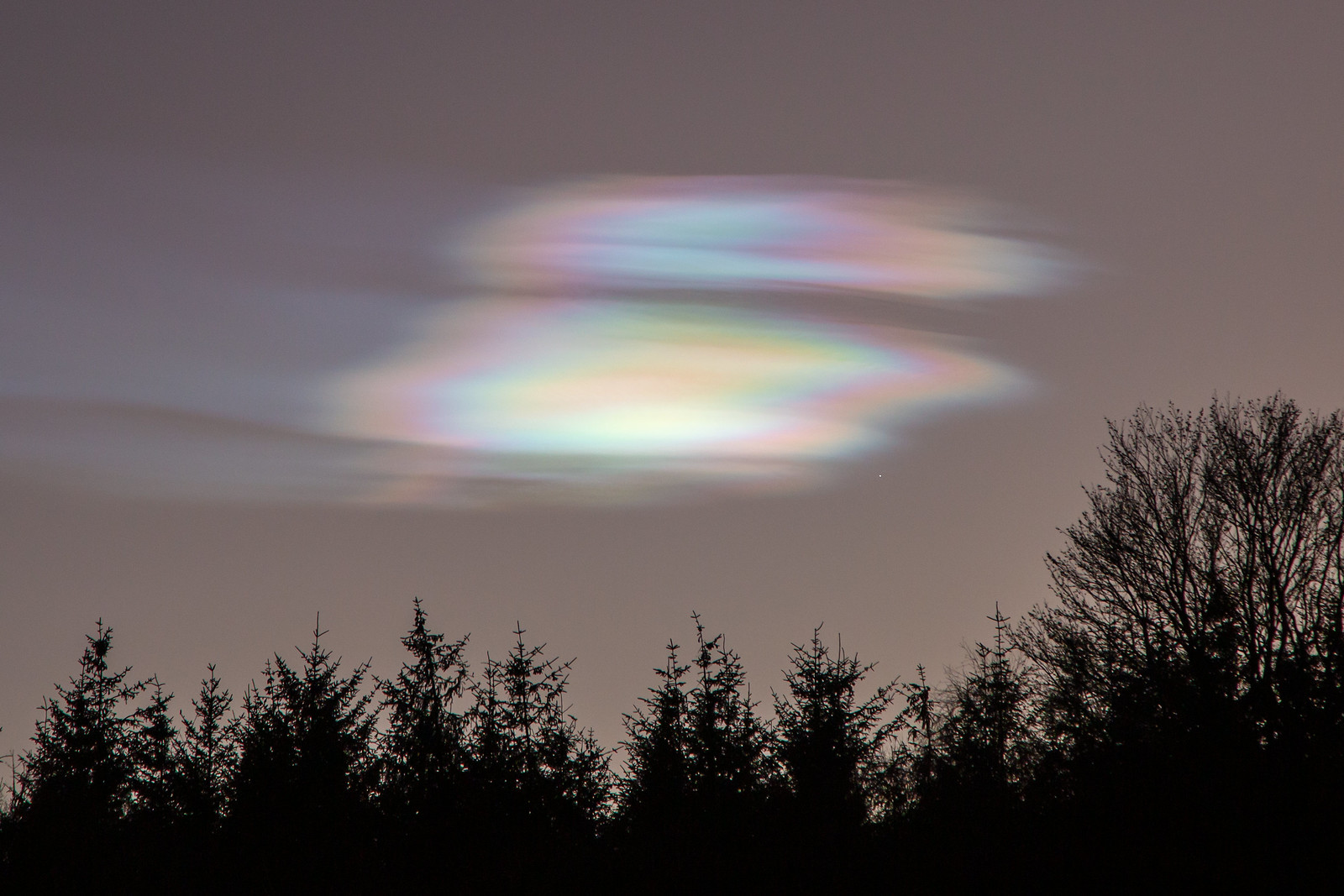 Rare Polar Stratospheric (Nacreous) Clouds have been spotted over the north of Scotland. I was lucky enough to see them, for about a 20-minute period, before the (Tropospheric) rain clouds moved in again. Venus lies to the bottom right of the clouds in the second image.

These photos were taken at about 5 p.m. (local time) from Elgin, Moray, Scotland.