Hubble: Ghost Light Among Galaxies Stretches Far Back In Time

Hubble: Ghost Light Among Galaxies Stretches Far Back In Time 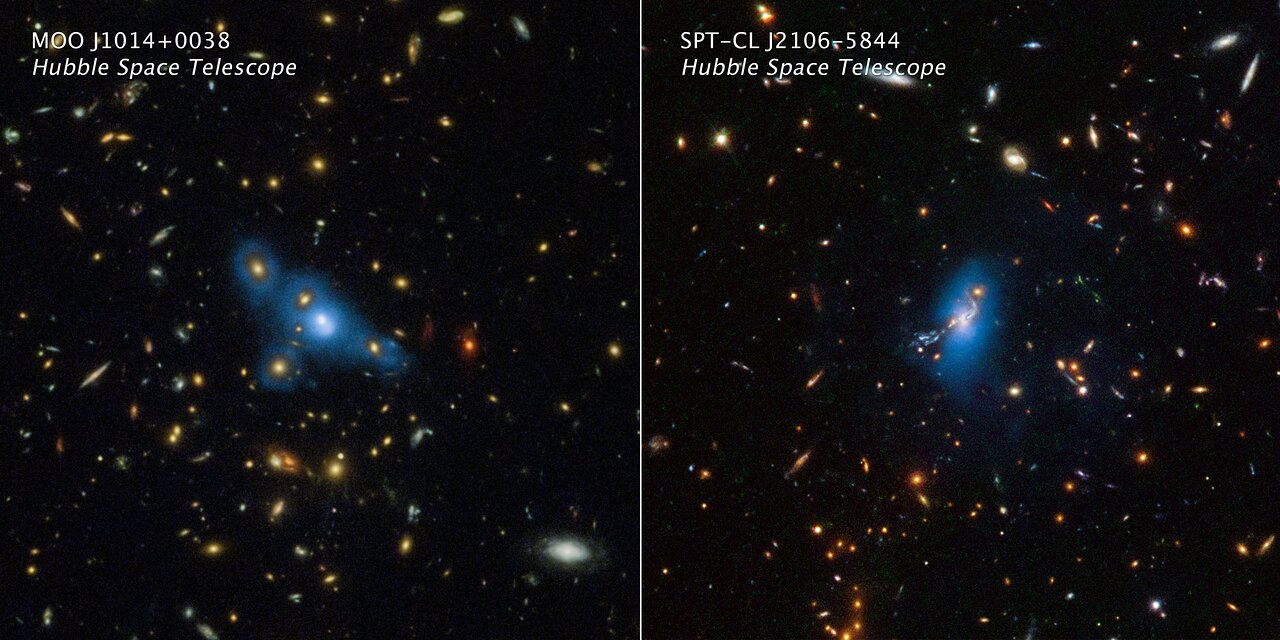 These are Hubble Space Telescope images of two massive clusters of galaxies named MOO J1014+0038 (left panel) and SPT-CL J2106-5844 (right panel). The artificially added blue color is translated from Hubble data that captured a phenomenon called intracluster light. This extremely faint glow traces a smooth distribution of light from wandering stars scattered across the cluster. Billions of years ago the stars were shed from their parent galaxies and now drift through intergalactic space.

Science Credits: NASA, ESA, STScI, James Jee (Yonsei University);
Image Processing: Joseph DePasquale (STScI)
In giant clusters of hundreds or thousands of galaxies, innumerable stars wander among the galaxies like lost souls, emitting a ghostly haze of light. These stars are not gravitationally tied to any one galaxy in a cluster.

The nagging question for astronomers has been: how did the stars get so scattered throughout the cluster in the first place? Several competing theories include the possibility that the stars were stripped out of a cluster's galaxies, or they were tossed around after mergers of galaxies, or they were present early in a cluster's formative years many billions of years ago.

A recent infrared survey from NASA's Hubble Space Telescope, which looked for this so-called "intracluster light," sheds new light on the mystery. The new Hubble observations suggest that these stars have been wandering around for billions of years, and are not a product of more recent dynamical activity inside a galaxy cluster that would strip them out of normal galaxies.

The survey included 10 galaxy clusters as far away as nearly 10 billion light-years. These measurements must be made from space because the faint intracluster light is 10,000 times dimmer than the night sky as seen from the ground.

The survey reveals that the fraction of the intracluster light relative to the total light in the cluster remains constant, looking over billions of years back into time. ...

Intracluster light is already abundant at redshift beyond unity ~ Hyungjin Joo & M. James Jee
Know the quiet place within your heart and touch the rainbow of possibility; be
alive to the gentle breeze of communication, and please stop being such a jerk. — Garrison Keillor
Top
1 post • Page 1 of 1